Is Gaza Part of Land of Israel? It All Depends on Whom You Ask 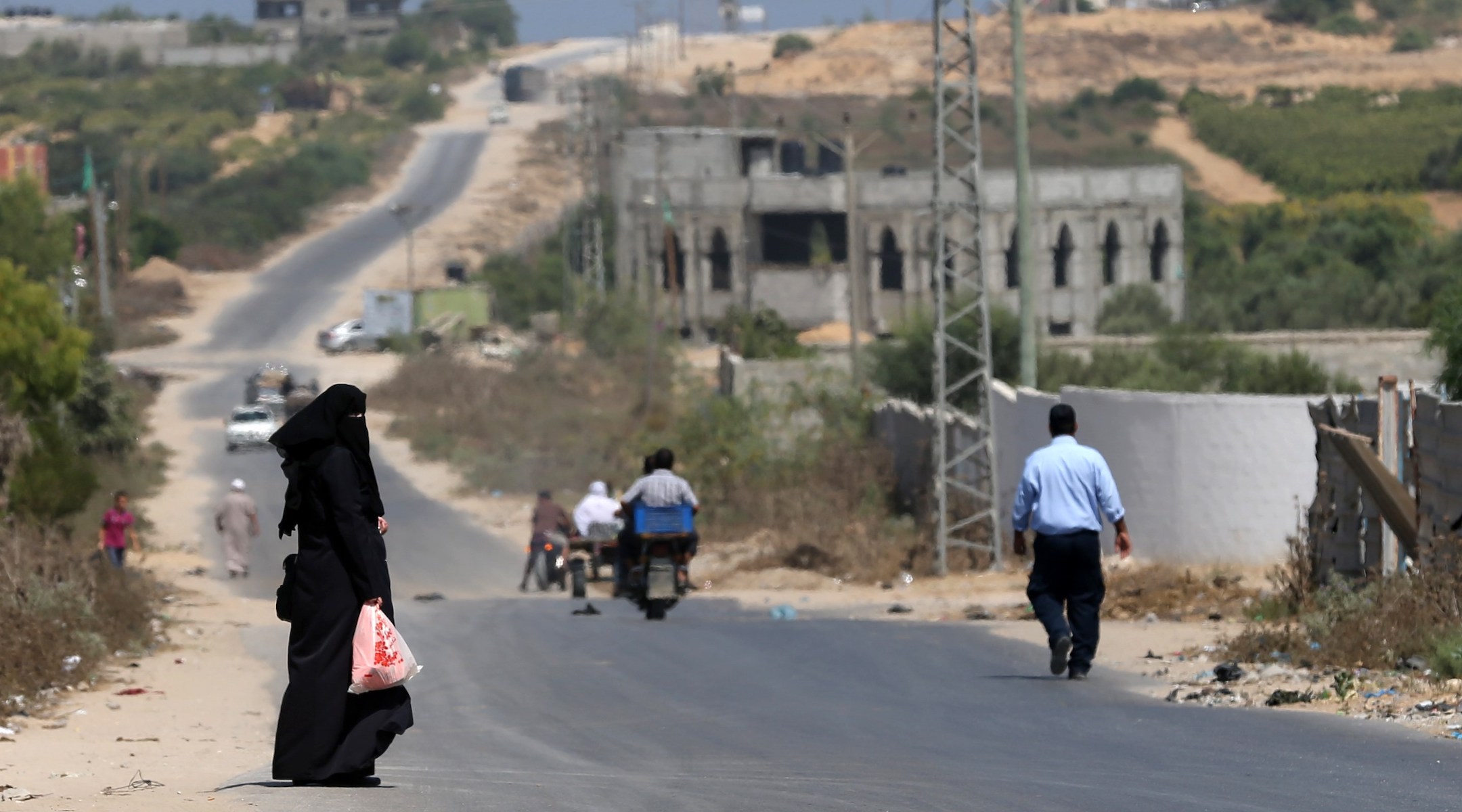 A Palestinian woman waits to be picked up on a road south of Gaza City in 2015. (Mohammed Abed/AFP via Getty Images)
See Original Daily Bulletin From This Date
Advertisement

Modern Israeli settlement in the Gaza Strip resumed only after the 1967 Six-Day War, but even with those settlements set to be evacuated, Jewish roots in the sandy strip of land where Egypt, Israel and the Mediterranean Sea meet run deep. Opinions differ on whether the area was or was not included in the Land of Israel conquered by the ancient Israelites in the Bible.

Samson is the only biblical Israelite noted for having set foot there. In the 17th century the false messiah Shabbatai Zevi gave the area a bad name when he launched his movement from its shores.

After a contentious debate, Israel’s Knesset voted last year to unilaterally withdraw from the Gaza Strip and evacuate the 9,000 or so Jewish settlers who live in suburban-style settlements there, where sprawling green lawns and playgrounds are protected by wire fences and military towers.

The settler population is dwarfed by the 1.3 million Palestinians who live in densely populated Gaza, which is 25 miles long and just six miles wide.

During biblical times, Gaza was part of the land promised to the Jews by God but never part of the land actually conquered and inhabited by them, said Nili Wazana, a lecturer on Bible studies and the history of the Jewish people at Hebrew University.

Wazana, who is currently writing a book on the borders of the biblical Land of Israel, said there are contradictory references to Gaza in the Bible. One passage in Judges — often cited by Jewish settlers and their supporters — says the tribe of Judah took control of the area. But other biblical stories contradict this — a pattern typical of the Bible, she said.

“On almost everything, you will find an opinion and an opposite opinion. It was not a homogenous text. It was not written at same time, and there are competing ideologies,” Wazana said. “The question of Gaza is one of the issues where you will find different opinions.”

Most Israelis saw neither historic nor strategic reasons for staying in Gaza. But to Yigal Kamietsky, the rabbi of Gush Katif, the main Jewish settler bloc there, Gaza is an integral part of biblical Israel.

“Gaza is part of the Land of Israel, no less than Tel Aviv and Bnei Brak,” he said. “There is no doubt it is part of the borders.” He said that not only was it considered a mitzvah to settle there, but that “if we were not here, I am not sure the State of Israel would still be there.”

Kamietsky said Jews in the Gaza settlements act as a buffer for those Jews living within Israel’s pre-1967 borders. Indeed, some Israeli officials fear that once Israeli troops and settlers are withdrawn from the strip, Palestinian terrorists may concentrate on building rockets that can hit the Israeli city Ashkelon, north of Gaza.

Kamietsky notes that historically Gaza was often caught in the crossfire of war.

“Always in history, Gaza seemed more problematic,” he said, pointing to the fabled enemies of the Israelites, the seafaring Philistines, who controlled the area in biblical times.

The one period when Jews appeared to have sovereignty over Gaza was during the time of Hasmonean rule, when the Jewish King Yochanan — whose brother was Judah the Maccabee — captured the area in 145 C.E.

Haggai Huberman — who has written extensively on the history of Jewish settlement in Gaza over the centuries and is writing a history of the Jews in Gush Katif — maintains that the Jews who lived there always considered themselves residents of the Land of Israel.

He says that Jews have lived on and off in Gaza since the time of Roman rule, their settlement following a pattern of expulsion during times of war and conquest and return during more peaceful periods. The remains of an ancient synagogue found in Gaza date to around 508 C.E. Its mosaic floor, unearthed by archeologists, is now displayed in the Israel Museum in Jerusalem.

There reportedly was a large Jewish community living in the area when the Muslims invaded in the seventh century. The Jews were noted for their skills as farmers and for making wine in their vast vineyards.

After the Spanish Inquisition in 1492, some Spanish and Portuguese Jews fled to Gaza. They abandoned the area when Napoleon’s army marched through but later returned in the early 1800s.

When the first wave of Zionist settlers arrived in the region at the end of the 19th century, a group of 50 families moved to Gaza City. According to Huberman, they established good relations with local Arabs.

The settlers stayed until they were expelled in 1914 — along with Gaza’s entire Arab population — by the Ottoman Turks during World War I. The Jews returned in 1920. But tensions simmered with Arab and Jewish nationalisms on the rise, and the relations with local Arabs began to sour, Huberman said.

The major Jewish presence in Gaza on the eve of Israel’s War of Independence in 1948 was a kibbutz called Kfar Darom, set up in 1946. It was evacuated during the war and was among the first places to be resettled by Jews after 1967. Initially inhabited by Israeli soldiers from the Nahal brigade, it soon evolved into one of several civilian settlements established in the 1970s as the settler movement gained strength.

Any attempt to downplay Jewish roots in the Gaza Strip “is part of the disinformation being spread,” said Eran Steinberg, a spokesman for the Gush Katif settlements.

For her part, Wazana said present-day debates over territory mirror those in the Bible.

“Descriptions of borders reflect different ideologies even back then,” she said. “People have put words in the mouth of God even in biblical times. If you have an ideology, you will find the right words to support it.”

Some who argue that Gaza was not part of the biblical Land of Israel point to the fact that Orthodox Jews are allowed to consume produce grown in the Gaza Strip during shmita — the seventh, or sabbatical, year when fruits and vegetables are not to be cultivated in the Land of Israel, according to Jewish law.

But Kamietsky said it is permitted to grow produce in the Gaza Strip because even though it is every bit “as holy” as the rest of the Land of Israel, it was not an area settled during the Second Temple period, when Jews returned from exile in Babylon.