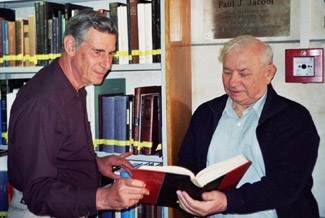 Yosef Lamdan, left, director of the International Institute of Jewish Genealogy, and Chanan Rapaport, a founder of the institute, hold a volume from the Paul Jacobi collection at the Jewish National and Hebrew University Library in Jerusalem. (Courtesy of Yosef Lamdan)
Advertisement

TORONTO, Aug. 18 (JTA) — A group of Jewish genealogists want to give the study of the Jewish past a brighter future. The genealogists recently announced the formation of the International Institute of Jewish Genealogy, to be housed in the Jewish National and University Library of the Hebrew University of Jerusalem. Although still in an early stage of development, the institute’s board expects the institute to become a major force in the world of Jewish genealogy within five years — a leading international research center that will work cooperatively with existing facilities like Texas’ JewishGen, the Central Archives for the History of the Jewish People and the Yad Vashem Holocaust Memorial in Israel, and the New York-based Center for Jewish History. “We want to lift Jewish genealogy to new heights,” said its founding director, Yosef Lamdan. “To put it into the general framework of Jewish studies at a university level.” A fellow of the Truman Institute at Hebrew University, Lamdan is an Oxford-trained historian, a seasoned genealogist and a career diplomat who retired last year as Israel’s ambassador to the Vatican. Many in the genealogical world readily embraced his idea for the institute, he said, and the staff at the National Library was also highly receptive. “They were happy to welcome us, because they know they have collections of Jewish historical documents that really should be looked at again through the prism of Jewish genealogy.” Although there are now some 45 universities with departments of Jewish studies across North America, few if any have ever offered a course on Jewish genealogy, Lamdan noted. He added that the International Institute might eventually produce graduates holding bachelor’s or master’s degrees in Jewish genealogy. Lamdan said the group recently received a “significant grant” from an American benefactor that will allow the institute to operate by the end of 2005. Even ahead of its formal opening, the institute has begun a project with researchers at the universities of Texas and Haifa involving the DNA of members of the Jewish tribe of Levi with pedigrees going back to Spain before the Inquisition. One of the institute’s first goals is to conduct a comprehensive global survey of all available Jewish genealogical resources. It also intends to host an early scholarly conference, establish standards of genealogical evidence, locate new genealogical resources, and make them available to researchers. The institute might help people who are conducting DNA research to find families with certain genetic profiles, Lamdan said. Or it might index important collections like the Jewish National and University Library’s Paul Jacobi papers, an underutilized compilation of some 400 German rabbinic family trees. It would also bring certain important Jewish collections to Israel, if the opportunity arose. “Our purpose is to try and take an overview and tell genealogists where all the collections are. If we can also unearth collections that so far have not been found, so much the better. We’d be very happy if the institute could bring them in. Being situated in a library, we’d have a place to store them.” Institute researchers could clarify common misconceptions about historic Jewish life. For example, not all Jews in the Russian Pale of Settlement during czarist times were part of organized Jewish communities in cities or shtetls: At least half lived intensely Jewish lives in villages with no rabbis, synagogues, yeshivas, mikvahs, or kosher meat, for which they were dependent upon neighboring towns. Institute researchers hope to build on some of the work accomplished by the popular JewishGen Web site and other organizations that have already been tilling the fertile field of Jewish genealogy for more than a decade. “Just as professional Jewish historians use the resources of the American Jewish Archives for their research, so also do we envision all those who are engaged in Jewish genealogy, at every level, availing themselves of the institute’s research products and benefitting from its projects,” said Sallyann Sack, the Maryland-based editor of the journal Avotaynu and one of more than a dozen founding members of the institute from at least seven countries.