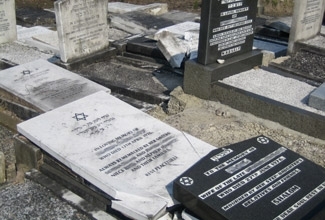 Tombstones damaged by vandals at the Rainsough Cemetery, a Jewish cemetery in Manchester, England, in June 2005. (Courtesy of Community Security Trust )
Advertisement

BERLIN, Dec. 1 (JTA) — A new report on discrimination in Europe says some countries are too slow to integrate minorities and combat xenophobia. The report, issued by the European Union Monitoring Center on Racism and Xenophobia also urges the E.U.’s 25 member countries to improve their reporting of bias crimes. The latest annual report of the Vienna-based center, released Nov. 22, indicates widespread discrimination in housing, jobs and education for minority groups in parts of Europe. The report is an overview of racist, xenophobic, anti-Semitic and anti-Muslim discrimination in Europe in 2004, and the responses to it. The report “clearly shows that much work is still ahead of us,” Anastasia Crickley, chairwoman of the Vienna-based agency’s management board, said in a news release. While some E.U. member states are setting good examples of how to combat discrimination, others “are very slow at implementing key directives. We need to speed up the process of integration of minority communities — and we can do so,” Crickley said. The director of the center, Beate Winkler, said a chief obstacle is the lack of adequate data collection that would allow member countries to “assess how far they have come in breaking the vicious circle of deprivation, prejudice and discrimination.” Meeting with Jewish groups in Brussels after the report’s release, Winkler said anti-Semitic incidents in France had increased in 2004. According to The Associated Press, she attributed current unrest among immigrant youth in France to a lack of jobs. The Jewish groups are pressing E.U. officials to agree on a definition of anti-Semitism and put more energy into the fight against anti-Semitism. According to the annual report, the most vulnerable groups in the European Union are ethnic and religious minorities, including Jews, Muslims, North Africans, immigrants from the former Soviet Union and the former Yugoslavia, refugees in general and Roma/Sinti, or Gypsies. The center also noted that in some cases law-enforcement officers are among the perpetrators, and that police and other authorities require training to overcome racism or xenophobia within their own ranks. Other initiatives recommended are: • fully implementing E.U. anti-discrimination laws; • ensuring that national employment strategies aim to improve the situation of migrants and minorities; • removing practices that undermine the right to housing; • ensuring equal access to education for all members of society; and • further developing legislation, criminal justice initiatives and data collection on racist incidents to provide a basis for policies that protect victims and deter perpetrators. The collection of data on hate crimes remains a daunting task. According to the report, there still is no publicly available official data on bias crimes for Greece, Spain, Italy and Portugal. In contrast, several new E.U. member states, namely the Czech Republic, Hungary, Poland and Slovakia, do collect official data. Of all E.U. member countries, the United Kingdom had the most comprehensive official data available and the highest number of reported racist incidents — 52,694 in 2003-2004. Germany has the next highest number, with 6,474 crimes registered as “politically motivated criminality — right wing” in the first 10 months of 2004. France recorded 1,565 racist, xenophobic and anti-Semitic threats and acts in 2004. According to the report, the disparities reveal “as much about the inadequacy and inconsistency of data collection as they do about the actual extent of racist violence and crimes in the E.U.”