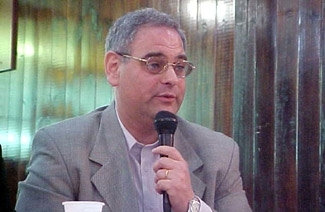 BUENOS AIRES, Dec. 1 (JTA) — The Peruvian Jewish community is suffering from a rise in anti-Semitic attacks, according to Rabbi Guillermo Bronstein, chief rabbi of the largest and most influential of the capital city’s three main synagogues, Lima’s Asociacion Judia 1870. He also believes that divisions within the community are developing as a result of political and social events unfolding in this unstable Andean country. “It’s very rare that one hears of anti-Semitic statements in Lima, but in recent times there has been an obvious increase due to two major causes. Firstly, the increase of neo-Nazi groups, still a tiny minority but very noisy. The Jewish community is keeping a watchful eye on their activities,” Bronstein said. “Secondly, the closeness of certain members of the Jewish community to this government” of President Alejandro Toledo “and apparent heavy influence over government decisions has exposed us to certain criticisms. At the same time one must say that there are members of this government, like, for example, the vice president, David Waisman — a member of our congregation — who are very popular and esteemed in the public eye.” Adding to the dangers posed by these two situations is a rapidly rising ethnic, indigenous, super-nationalist movement led by two Peruvian ex-military men, the Humala brothers, who have led two small rebellions against the Toledo government. “They are openly xenophobic and have principally targeted their attacks at Chileans due to longstanding tensions between Peru and Chile, and Jews,” Bronstein said. Since 1985, the Argentinean-raised Bronstein has been at the Asociacion Judia 1870, a Conservative congregation of German Jewish origin with about 200 families. “In total we are about 3,000 Jews in Peru, with only three main synagogues, ours and two other, Orthodox temples. The vast majority of Jews live in Lima but there is a small community in Iquitos,” the main city in the Peruvian Amazon, “as well as scattered Jewish families living in cities like Arequipa, Trujillo and Cuzco.” In the past few months there have been anti-Semitic threats against Salomon Lerner, the judge in charge of the national Truth and Reconciliation Commission. The commission was appointed to investigate the deadly insurgency of the Shining Path guerrilla movement and the excesses of the military during its crackdown on the Shining Path in the 1980s and early 1990s during an internal war believed to be responsible for some 80,000 deaths. Lerner’s commission, after an exhaustive study, determined that 53 percent of the deaths were directly attributable to the Shining Path and the other 47 percent were the responsibility of the Peruvian armed forces. The report details how most of the victims of this period were innocent people. The threats against Lerner have been anonymous, Bronstein says, “although they probably come from some extreme elements within the military in response to the report of the commission, which accused them of excessive force.” Bronstein noted that Salomon Lerner, a law professor at the Catholic University in Lima, is actually a practicing Catholic; his father is Jewish and his mother Catholic. Lerner’s brother, Boris, is a practicing Jew and a member of Bronstein’s congregation. The case of Alberto Fujimori, the populist ex-president who held office from 1990 to 2000, is proving to be a highly divisive factor within the Jewish community. Charged with corruption and complicity in human rights violations in some of the massacres that occurred in the war against the Shining Path, Fujimori escaped prosecution by secretly leaving the country in October 2000 as his grasp on power slipped. He resurfaced in Japan, sent his resignation to Peru by fax, and lived in Japan for five years. Just a few weeks ago Fujimori was detained in Chile and is being held for extradition to Peru to face the numerous charges against him. “The Jewish community is very divided over Fujimori, with the basic lines drawn as the business community supporting him and the intellectual community against him,” said Bronstein. “The businessmen see the real possibility that Fujimori could return to power, not necessarily as president. But with a congressional bloc of 15-20 out of 120 seats, anybody would have to negotiate with Fujimori to run the country. Other members of the Jewish community, mainly the intellectuals, perceive a return to power of Fujimori — in any form — as a democratic disaster for the country.” To further complicate Peru’s social and political unrest, the country’s severe economic recession between 1997 and 2003 affected many Jews, who saw their wages drop and their savings drained. There have been economic problems for the Jewish institutions, although nothing on the order of the complete collapse that was seen in Argentina, for example.