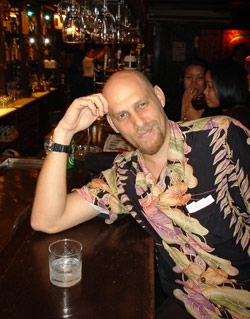 BANGKOK, Thailand, Jan. 4 (JTA) — You’re on a visit to Bangkok and already have seen the obligatory sights. You’ve marveled at the glittering spires and splendid temples of the Grand Palace; you’ve watched young dancers in conical golden tiaras perform an exquisite traditional ballet. You’ve even braved a bumpy ride through notoriously congested traffic in the back of a motorized tricycle rickshaw, known locally as a tuk-tuk. What now? Aaron Frankel can help you out. Creator of the Groovy Map, the American-born, Jewish Bangkok native has carved out a niche in highlighting the funky and the hip, the exotic and the outlandish. His handy, pocket-size guide — waterproof and laminated — combines a city map with recommendations listing Frankel’s favorite funky local eateries, nightclubs and “secret haunts,” complete with his tongue-in-cheek commentaries on each site. And it’s not just for the “Big Mango,” as Bangkok is known: Frankel has made Groovy Maps for Singapore, Shanghai, Bali, the Thai trekking paradise of Chiang Mai and other destinations across Southeast Asia. In the works are maps for Beijing, Manila, Tokyo, Sydney and Vietnam. There are Japanese, Chinese and German versions of his maps as well. “We produce orientation maps by emphasizing activity-loaded areas in a city and blanking out others,” Frankel explains in his Bangkok offices inside a teakwood townhouse. “If you know where you are, using our map you can find a nearby bar, a club or a fine restaurant within seconds.” Let’s assume that you’re killing time in downtown Bangkok. Enter any 7-Eleven or bookstore and pick up a Bangkok Day & Night Groovy Map for about $5. Does the idea of feasting on gastronomic creations while lying supine in the manner of a lounging oriental potentate appeal to you? If so, head for the Bed Supperclub. A white ovoid cylinder resembling a retro space pod, the popular restaurant-nightclub welcomes diners to a surreal all-white realm bathed in a meditative penumbra, with a disk jockey providing lounge melodies in the background. The place features high among Frankel’s recommendations. Of course, you may want to treat yourself to a rejuvenating, traditional Thai massage by expert hands at Being Spa. Or how about luxuriating in the olfactory pleasures of herbal aromatherapy at the Chivit Chiva? Frankel dares hardier spirits to pit themselves against seasoned local Thai boxers at the Bangkok Fight Club. Thanks to such let’s-party-like-the-natives tips, the Groovy Map Bangkok guide — which first appeared in 1996 and now is in its seventh edition — is still Frankel’s best-selling map. In the past year alone it has sold around 50,000 copies, he says. Not bad for a product that was conceived entirely on a whim. Frankel has lived in Bangkok since he was 2, when his environmentalist father relocated the family to Thailand on a U.S. government posting in 1969. A self-described oddball with a shaved pate, a goatee and a cultivated air of eccentricity, Frankel studied drama at the University of California at Irvine but had difficulty keeping a job after college. In 1995, tired of reciting the same tips on Bangkok hot spots to visiting friends, he decided to draw them a map illustrated with his own cartoons. They loved it. Then the idea hit him: Why not mass-produce the map and sell it? Groovy! he thought. So was born the Bangkok By Night Groovy Map. “A decade later, I’m still an amateur in all aspects of my business,” Frankel says. “My wife jokes that I was a clown who became a businessman.” Nurith Thongborisute, 33, a graduate of Stern College in New York, left her well-paying corporate law job at a leading Bangkok firm to join her husband at Groovy Maps. She now oversees distribution, development and marketing. Like Frankel, Thongborisute is one of Thailand’s few “indigenous” Jews. She was born in Bangkok in 1972 to a Jewish American mother and a Thai father, a renowned surgeon who founded Thailand’s first private hospital. Amid the tolerant Thai-style Buddhism, Thongborisute was raised in a strictly Jewish environment. She and Frankel wed under a chupah, a rare ceremony in Bangkok. “Aaron and I are like fire and water. He can drive me crazy, he is so disorganized,” she says. Yet in her husband’s case, Thongborisute adds, happy-go-lucky flamboyance makes for good business sense: “Groovy Map is a brand with a great personality — Aaron’s.” Frankel’s motto is “Have a blast,” and he lives by his own dictum. He cruises around Bangkok in a 1961 two-seater coupe, a racing car made entirely of aluminum. On weekends, he rides the waves in his boat off the beaches of Pattaya, a seaside town southeast of Bangkok, famed for its rowdy nightlife. Or as Frankel puts it in the Groovy Map Pattaya Day & Night guide, “Pattaya offers a tempting array of big city choices in a beach setting [and] ego therapy for men as bargirls sing out ‘You sexy man’ to any lifeform higher than a jellyfish.” Pattaya comes second only to Frankel’s beloved Bangkok for hedonism. “Our client is the business and affluent leisure traveler,” he notes. “Their median age is 40 and up, and the reason we know is, customers keep asking us to print texts in larger fonts because they can’t see them.” On the side, Frankel publishes motoring maps for Thai drivers and produces the free official map for Bangkok’s elevated light-rail metro. But he needs to be going now: He’s off to Hong Kong to investigate the hippest places there for a new map. “Research for me consists of eating, drinking and partying my way through a city,” he volunteers. “I guess I can’t complain.”