Jews for Jesus out in force 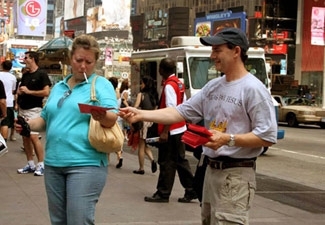 A Jews for Jesus missionary hands out leaflets in New York´s Times Square on July 2.

NEW YORK, July 9 (JTA) — There’s a holy war of sorts going on in New York City. Jews for Jesus has been running campaigns here for 33 years, but the messianic group’s proselyting effort has never been as large as this summer — nor has it elicited such a united Jewish response. The “Behold Your God” campaign represents the final stop of a five-year, $22 million tour of every city outside Israel with a Jewish population of 25,000 or more. While Jews for Jesus’ previous efforts in the New York area focused on Manhattan, this year’s program is meant to target all five boroughs, plus Westchester, Bergen, Suffolk and Nassau counties. Full-time missionaries, all of whom spent two weeks at the Moody Bible Institute in Chicago before their arrival, have been instructed to target Israelis, Russian-speaking Jews, intermarried families and the fervently Orthodox. Instead of sticking to phone-a-thons and brochure distribution, Jews for Jesus volunteers now are manning kiosks at shopping malls, hanging out at Yankee Stadium, hosting film screenings and striking up conversations in Russian, Hebrew and Yiddish. The $3 million effort will continue through July 29. In a rare show of unity, all four major Jewish streams have banded together to launch a counter-campaign. The New York Board of Rabbis also has signed on, with the Jewish Community Relations Council of New York’s anti-missionary task force doing much of the heavy lifting. Jews for Judaism, a Baltimore-based anti-missionary group, is serving as a consultant. The groups’ message is one of unity and community building: “Say ‘Yes’ to Judaism.” In roughly 60 newspaper ads, the coalition is asking Jews to affirm their commitment to Judaism by learning Torah, having Shabbat dinner or by giving tzedaka, among other things. Information on Judaism is being distributed to local camps, schools and synagogues, and is available online. Rabbi Michael Miller, executive vice president and CEO of the JCRC of New York, said the Jews for Jesus message doesn’t require a direct response, since “the vast majority of Jews have no interest whatsoever in the message the Hebrew Christians are promoting.” But, he said, “it provided us with an opportunity to reinvigorate Jewish practice. We are approaching this as a positive, educational learning experience for the Jewish community. Miller said he doesn’t challenge Jews for Jesus’ right to disseminate information, but he does take issue with the group’s “deceptive interpretation of the Christian faith.” Scott Hillman, director of Jews for Judaism, said the idea that a Jew can consider Jesus the messiah is an oxymoron. “If you have two different faith communities, you can’t be a member of both at the same time,” he said. “If you accept the scripture of another faith, you have left the Jewish community behind.” Hillman said some Jews may be vulnerable to Jews for Jesus’ message because of its packaging. He cited misleading ads about Hebrew Christians being “fulfilled” Jews, and brochures that cater to whatever religious group the target belongs to. “Deception, straight out,” he said. But Jews for Jesus says its methods and message are valid. “I’m just mystified as to how we could be perceived as deceptive,” said Susan Perlman, Jews for Jesus’ director of communications, pointing out that all missionaries wear T-shirts with “Jews for Jesus” emblazoned across the front. “We tell people straight up front what we believe about Jesus.” David Brickner, the missionary group’s executive director, said Jewish leaders had a “kind of protective attitude, like this community is somehow not able to think for itself on these issues,” he said, “that somehow we’re Svengalis that can come in and mind-control.” “Look, we didn’t come to believe this in order to win a popularity contest,” he continued. “We understand that Jesus has been a controversial issue for the Jewish community for 2,000 years. But we sure would like to have a voice on this.” Marcia Eisenberg, the JCRC’s general counsel and director of its Jewish communal affairs and legal assistance program, said Jews for Jesus should not be afforded the luxury. “They’re trying to define themselves into our community,” she said. “But we get to define our community, not you guys.” Miller agreed. “From our perspective, even one Jew enticed by the deceptive message of the Hebrew Christians is one Jew too many,” he said.