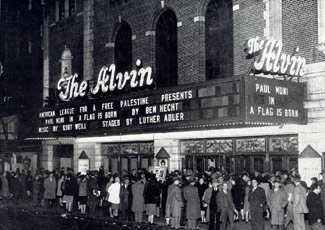 The 1946 premiere of Ben Hecht´s controversial pro-Zionist Broadway play, ´A Flag is Born.´

PHILADELPHIA, Aug. 27 (JTA) — Broadway plays don’t usually produce political or social change. But Ben Hecht’s controversial pro-Zionist play, “A Flag is Born,” which debuted 60 years ago, had an impact on three of the most contentious issues of its day: the fight to establish a Jewish state, the smuggling of Holocaust survivors to Palestine and the battle against racial segregation in the United States. Hecht, an Academy Award-winning screenwriter, was active in the Bergson Group, a 1940s political action committee that lobbied for the rescue of Jews from Hitler and for the creation of a Jewish state. It made waves by using protest tactics that were unusual for that era, including full-page newspaper ads and theater productions. Among the many celebrities whom Hecht helped bring to the Bergson group were the Adlers, the “first family” of Yiddish theater, and they were central to “A Flag is Born.” Luther Adler directed the play. His half-sister Celia and another Yiddish star, Paul Muni, co-starred as elderly Holocaust survivors straggling through postwar Europe. Their sister Stella, the statuesque actress and acting coach, shared the role of narrator with journalist Quentin Reynolds. Stella’s most promising student, 22-year-old Marlon Brando, was cast in the role of David, a passionate young Zionist who encounters the elderly couple in a cemetery. “When my mother came home from the first rehearsal, she said of Brando, ‘I can’t remember his name, but boy, is he talented,’ ” recalled Celia Adler’s son, Selwyn Freed, a retired professor of urology. “Marlon was simply gorgeous, and his acting was astounding,” said Stella’s daughter, Ellen, who dated Brando for several years. “At one rehearsal, his performance was so intense that my uncle Luther was moved to tears. And it wasn’t just acting — Marlon really cared about the Jewish refugees, just as he later became active for black civil rights and the American Indians.” On Sept. 5, 1946, “Flag” debuted at Manhattan’s Alvin Theater, known today as the Neil Simon Theater. Due to popular demand, the four-week opening run was extended to 10 weeks. The characters’ sharp criticism of British rule in Palestine irked many in England. The London Evening Standard called it “the most virulent anti-British play ever staged in the United States.” American reviewers were kinder. Walter Winchell said “Flag” was “worth seeing, worth hearing, and worth remembering… it will wring your heart and eyes dry… bring at least 11 handkerchiefs.” Brando’s powerful performance, especially his lines criticizing American Jewry’s response to the Holocaust, touched a nerve. “You Jews of America!” he shouted. “Where was your cry of rage that could have filled the world and stopped the fires?” The accusation “sent chills through the audience,” Brando later recalled. At some performances, “Jewish girls got out of their seats and screamed and cried from the aisles in sadness, and at one, when I asked, ‘Where were you when 6 million Jews were being burned to death in the ovens of Auschwitz?’ a woman was so overcome with anger and guilt that she rose and shouted back at me, ‘Where were YOU?’ ” When the Zionist flag was raised in the final scene, with Kurt Weill’s music in the background, “it sent a chill through the audience,” said Miriam Chaikin, a children’s book author who worked for the Bergson Group. “It sounded a note of hope, it stirred feelings of pride and strength that had lain dormant in Jewish hearts for too long.” Victor Navasky, publisher emeritus of the political weekly The Nation, was a teenage usher who collected contributions in buckets after each performance. “The buckets were always full,” he recalled. “The audiences were extremely enthusiastic about the play’s message. For me, too, it was a political awakening about the right of the Jews to have their own state.” “Flag” was performed in Philadelphia, Boston, Chicago, Baltimore and, reportedly, in a Displaced Persons camp in Europe. In some of the later performances, young Sidney Lumet — later an Academy Award-winning director — replaced Brando. “This is the only romantic thing left in the world,” Lumet told reporters before one show. “The homecoming to Palestine, the conquest of a new frontier, against all obstacles.” A planned performance at the National Theater in Washington was relocated to Baltimore’s Maryland Theater because Hecht would not permit his works to be staged at theaters, such as the National, that barred blacks. When Hecht discovered that the Maryland Theater restricted blacks to the balcony, the Bergson Group and the NAACP teamed up to protest: The NAACP threatened to picket and a Bergson official announced he would bring two black friends to sit with him at the play. The management gave in, allowing black patrons to sit wherever they chose. NAACP leaders hailed the “tradition-shattering victory” and used it facilitate the desegregation of other Baltimore theaters. “A Flag is Born” was a triumph. It influenced American public opinion by reaching large audiences with an inspiring message about the plight of Holocaust survivors and the need for a Jewish state. It raised enough funds to purchase a ship — renamed the S.S. Ben Hecht — that tried to bring 600 survivors to Palestine, and that focused international attention on the refugees when the ship was intercepted by the British. And “Flag” scored an important victory over racial segregation in Baltimore, demonstrating that, as Hecht put it, “to fight injustice to one group of human beings affords protection to every other group.” Rafael Medoff is director of The David S. Wyman Institute for Holocaust Studies, www.Wymaninstitute.org.