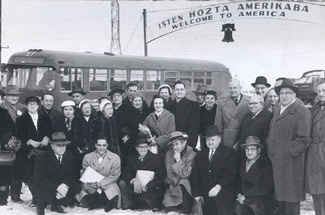 Newly arrived Hungarian Jewish immigrants to the U.S. who fled their country due to the 1956 Hungarian Revolution.

BRATISLAVA, Slovakia, Oct. 24 (JTA) — The second half of the 20th century was marked by crises that sparked waves of Jewish flight and immigration — but it was rare for two such crises to happen simultaneously.

In late 1956 and early 1957, the Hungarian Revolution and the Suez Crisis in Egypt rattled their respective Jewish populations, disgorging about 20,000 Jews apiece.

For those who fled, the anti-Jewish strain in each event was the final straw. “Ask anybody who had to flee once: It’s just a matter of pure physics,” says Valery Bazarov, director of the Hebrew Immigrant Aid Society’s location and family history services, who bolted the Soviet Union with his family in 1988. “You have a scale: When the fear to stay is greater than the fear to leave, then you go. But it depends on your physical and spiritual mindset, how you interpret what you see and hear.”

For neither community was this the first wave of emigration: On the heels of a Holocaust that decimated their community, thousands of Hungarian Jews migrated to pre-state Palestine or to the West. Others didn’t have the means to leave or stayed with elderly relatives. But thousands more — especially young Holocaust survivors grateful to the Soviets for liberating them — flocked to join Soviet-backed Communists who sought to ensure that fascism would never return. Some Jews became members of the secret police. That reality, coupled with the fact that Hungary’s top four Communist leaders were of Jewish origin — including the dictator Matyas Rakosi, who reigned at the height of the Communist terror in the early 1950s — lent credibility to the idea of communism as Jewish revenge for the Holocaust. Jews also were among the regime’s many victims.

Meanwhile, Egypt’s Jews were a remarkably diverse lot, some indigenous and some with roots in Europe or elsewhere in the Middle East and North Africa. At 80,000 or so, the Egyptian Jewish community was the largest in the Arab world. When Egypt fell under the sway of Nazi and fascist ideas during World War II and anti-Zionist, pro-Arab sentiment afterward, Jews reacted in myriad ways: Some became Zionists or Communists, others became ever more loyal to the government, and others fled. After Israel’s 1948 War of Independence, Jews faced increasing hostility, harassment, arrests, property seizures and violence. About 20,000 fled, with three-quarters of them going to the new Jewish state.

Jews continued to stream out of Egypt annually, but in both Egypt and Hungary, 1956 was a watershed time. During the uprising in Hungary, Jews were on both sides of the barricades, with some defending the regime and others trying to tear it down. Jews were among the first to denounce the repression, but some later were imprisoned and even executed for their role in the uprising. The revolution saw sporadic attacks on Jews in small towns across the country, with some targeted as representatives of the regime and others simply for being Jews. In Budapest, a few soap-box orators raged against “the Jews,” and some elderly Jews say they feared the revolution would turn against them. All told, some 200,000 Hungarians, or some 2 percent of the population, fled the country, including an estimated 20,000 Jews, or one-fifth of the Jewish population.

In Egypt, in what the government claimed was retribution for Israel’s role in the Suez Crisis, up to 25,000 Jews — half of the community — were driven out as the government seized their property, arrested another 1,000 and “Egyptianized” the country. The twin crises challenged relief organizations like the American Jewish Joint Distribution Committee, which provided assistance to Jewish refugees from both countries.

As most of the Egyptian refugees resettled in Israel, it was the Hungarians flowing through Austria who became more renowned in the West: They were seen as victims of the great ideological battle of the day, the Cold War. The Jewish Agency for Israel helped those who wanted to move to Israel, while HIAS arranged resettlement for everyone else. The operation itself — housing, food, clothing and other services — mostly was financed by the JDC, with help from Austrian authorities. In Vienna, some Jews initially were reluctant to identify themselves to authorities who wanted to help them.

“Fear of anti-Semitism, fear of persecution, the traditional identification with Hungarians, the traditional separation of nationality from religious affiliation in Hungary, and anti-religious propaganda and education in communist Hungary for close to 10 years made many Hungarian Jews refuse to reveal their religion or cultural background,” Canadian academic Peter Hidas wrote in “Canada and the Hungarian Jewish Refugees, 1956-1957,” estimating that one-third of the Hungarian Jews who fled ended up in Canada.

Anti-Semitism even flared within the refugee camps in Vienna. “At a few camps, considerable friction developed between Hungarian Jews and non-Jews,” Hidas writes. “In mid-January 1957 more than 1,000 Hungarian refugees at the processing centre in Vienna staged an anti-Jewish riot because of rumors that Jews were getting preference in obtaining entry into the United States.”

Countries across the world took in the Jewish refugees, who were considered desirable because of their high education and skill level. Washington moved quickly to help the refugees, creating the President’s Committee for Hungarian Refugee Relief. HIAS resettled about half of the 14,000 or so Jewish refugees from Hungary in the United States, Canada, Australia, Latin America and Western Europe. Most of the 5,000-plus refugees from Egypt that HIAS resettled rebuilt their lives in Latin America.

As the crises overlapped, refugees from the two countries sometimes were in the same caseload. For example, the American Jewish Historical Society has documented the work of Cecelia Razovsky, a HIAS official who traveled widely in Latin America in 1957-’58, seeking new homes for Jewish refugees from Hungary and Egypt. Brazil, which had South America’s second-largest Jewish community, took in some 3,000 Jews in 1957, three-quarters of all the Jewish refugees immigrating to the continent.

Some adapted more readily than others, Razovsky observed. “The Hungarian women take jobs at once, or make jobs, sewing gloves, or baking pastries and peddling them in office buildings,” she wrote to a friend. “Whereas the Egyptian women, upper middle class, never worked in their lives (some actually never washed a dish or a pair of stockings), find it hard to believe that it is now necessary for them to put their shoulder to the wheel.”

Other countries across Latin America pitched in. Lima — home to 90 percent of Peru’s 3,000 to 4,000 Jews — absorbed 50 families. Yet “the entire Jewish community is sensitive to Peruvian reaction towards possible immigration, claiming there is much anti-Semitism here,” Razovsky wrote. “Some are fearful that if many immigrants come, there will be more open anti-Semitism displayed.”

Still, the refugees who left faced a better future than those who stayed. In Hungary, Jews would continue to trickle out over the years, but communism remained in place for another three decades. Today, though, Hungarian Jewry is resurgent, as younger generations help revive what remains the largest Jewish community in Central Europe, estimated at 80,000 to 100,000 people.

As for Egypt, the loss of the community’s economic and spiritual leaders after 1956 was a crippling blow to communal life. By 1970, only 300 Jews remained, and today there are only about 100 mostly elderly Jews. “In the space of less than twenty years, Egypt was emptied of its Jews,” Egyptian-born researcher Racheline Barda wrote in “The ‘Second Exodus’ of the Jews of Egypt, 1948-1967.” “It is the first time in over twenty-five centuries of continuous Jewish presence in Egypt that the Jewish population has been reduced to such an extent.”