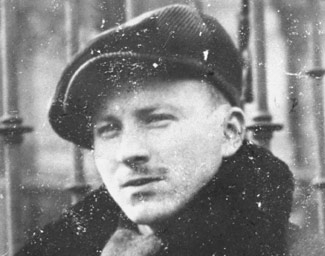 Benjamin Meed, a member of the Jewish underground living in hiding with false papers, photographed in the Saski Gardens on the Aryan side of Warsaw in 1943.

NEW YORK, Oct. 25 (JTA) — When Benjamin Meed and other survivors were organizing a conference of thousands of Holocaust survivors in Washington in 1983, police met with them to tell them that white supremacists were planning to organize a counter-rally. “So we thought about this for a minute and we gave the police the following: Just go ahead and tell them we survivors are not afraid,” said Roman Kent, Meed’s friend and colleague for more than 30 years. “The demonstration did not materialize.” Those who knew him say that was vintage Meed: courageous and uncompromising in his dedication to the memory of the Holocaust. Meed, who was a key figure in spreading awareness of the Holocaust in the United States, died Tuesday in New York at age 88 after a long illness. A survivor of the Warsaw Ghetto, Meed planned the World Gathering of Jewish Holocaust Survivors in 1981 in Israel and established the American Gathering of Jewish Holocaust Survivors and Their Descendants, also in 1981, leading it until his death. Meed was a leader in turning Holocaust commemorations, which long had attracted mainly survivors and their families, into citywide and communitywide events. Along with his wife, Vladka, he helped set up one of the first Holocaust teacher-training programs in New York. “He had an amazing flair about him,” said Sara Bloomfield, director of the U.S. Holocaust Memorial Museum in Washington. “He understood the way to create a commemoration that was meaningful to more than just survivors.” Meed also served on the advisory board of the President’s Commission on the Holocaust, which recommended establishing the Holocaust museum, and served on the memorial’s governing council from 1980 to 2004. “Ben would always say, ‘We’re about education and commemoration, and we’re going to make the Holocaust museum the central address for Holocaust remembrance in the world. And we’re going to do it with neshome,’ ” or soul, Bloomfield said. Along with Sigmund Strochlitz — who died earlier this month at age 89 in Connecticut — and others, Meed was instrumental in establishing the Days of Remembrance, the Holocaust commemoration observed annually in the Capitol Rotunda. The Meeds also helped establish a registry of Jewish Holocaust victims that united survivors and their families. The registry is now part of the museum. Born in Warsaw in 1918, Meed also survived slave labor during World War II. While in the ghetto, Meed met Vladka, who was working as a courier between the ghetto and the rest of the city. “They formed an extraordinary bond,” Bloomfield said. Meed came to the United States in 1946 and worked in import-export in the fur trade. He was involved in the Claims Conference, which has helped distribute billions of dollars in Holocaust restitution funds, as well. In addition to Vladka, Meed is survived by his son, Steven, and his daughter, Anna Scherzer, both physicians, as well as five grandchildren. Funeral services will be Friday morning at the Park East Synagogue in Manhattan.