Study: European anti-Semitism up since war 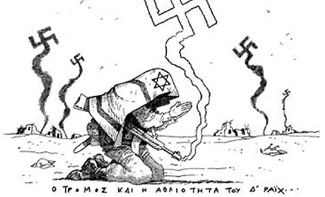 PRAGUE, Nov. 12 (JTA) — Israel’s recent war with Hezbollah resulted in a new wave of anti-Semitic incidents in Europe — almost all in Western Europe, a new report finds. The European Jewish Congress’ 53-page report, presented Sunday at a World Jewish Congress meeting in Paris, reveals that the transference of anti-Israel sentiment onto Jews occurred almost exclusively in Western Europe, with the atmosphere remaining either neutral or pro-Israel in the former Eastern Bloc. Denmark was another exception, as the EJC notes that media and politicians kept a balanced view of the conflict. Though the conclusion that anti-Semitism rose worldwide during that war already is well documented, the EJC report points to specific trends that pose challenges in Europe, such as the collaboration of Muslim extremists with left-wing political parties; political and media comparisons of Israeli leaders to Nazis; and the first instances of Turkish Jews complaining of anti-Semitism since an Islamic-based political party took power in Turkey in 2002. The Paris-based EJC hopes to use the report to convince E.U. officials to attack the problem through public education, and to provide security for Jewish communities. “We are not trying to be alarmist,” report author Ilan Moss told JTA. “But we do see that European political discourse can be slanted, with European politicians feeling comfortable publicly supporting Hezbollah and treating it as a liberation organization.” In Austria, 83 anti-Semitic acts were recorded from April 2006 to August 2006, up from 50 during the same period in 2005. Anti-Semitic letters sent to the Jewish community of Vienna “drastically increased” during the war, with a number of writers comparing Austria’s Jewish leaders to Nazis. This sentiment was popularized by Austria’s two extreme-right parties, both of which presently are in Parliament. France also saw a rise in anti-Semitic events, with 61 incidents during the war, an increase of 79 percent over the same period last year. At demonstrations in support of Lebanon across France, placards read “Death to the Jews — Death to Israel,” and Stars of David were emblazoned with swastikas. Nonetheless, Shimon Samuels, head of the Simon Wiesenthal Center’s Paris office, said the “blowback” of anti-Semitism that occurred in France after the Palestinian intifada began in 2000 was not as strong during the conflict with Hezbollah. “This is probably because the people who rioted a year ago and who would be likely to attack a synagogue were more focused on attacking the French system,” he said, referring to October 2005 riots in Paris suburbs by Muslim youth protesting discrimination, poor housing conditions and unemployment. In Great Britain, Jewish leaders had announced already in September that anti-Semitic acts doubled during the war, with a parliamentary commission endorsing their findings. The EJC report cited Greece as a country where anti-Semitic political and media rhetoric were the norm during the war. Greek President Karolos Papoulias said during an official commemoration of the 1974 fall of the Greek military junta, “Greek public opinion is shocked by the undeclared war against Lebanon. After the Second World War, the world believed that the logic of collective punishment would have never returned.” Such sentiments were repeated by numerous European leaders. In a July interview with Penthouse magazine, Jan Marijnissen, chairman of Holland’s Parliament and leader of the Socialist Party, compared Islamic terrorism in the Middle East to the actions of the Dutch resistance against Nazi occupiers in World War II. Norway’s Jewish community was the focus of worldwide attention after the Oslo synagogue was repeatedly vandalized and eventually fired on in September by Islamic extremists. The incident was preceded in early August by an editorial questioning Israel’s right to exist penned by author Jostein Gaarder in the newspaper Aftenposten. In Switzerland and Sweden, mainstream leftist parties supported large rallies for Hezbollah. “We are seeing an alliance from left-wing politicians with Hezbollah, which is something totally different than the more general sympathies for the Palestinians after the intifada,” said Anders Carlberg, head of the Jewish community in Gothenburg, Sweden. Leaders of Turkey’s Jewish community told researchers that their members were experiencing anti-Semitism for the first time: Businessmen said that they were being ostracized for their religion, and community leaders said the media demonized Israel and Jews during the war with editorials that incited racial hatred. Within the European Union, the German Jewish community may have experienced perhaps the most hostility during the war, despite the pro-Israel stance of Chancellor Angela Merkel, according to the report. The Central Council for Jewish in Germany received more than 300 letters, attacking both the organization and German Jews for “blindly supporting Israel and spending state money to support a ‘fascist state’ in the Middle East,” the report states. The council’s executive director, Stephan Kramer, told JTA the hostility didn’t come from the country’s sizable Muslim population, but from ethnic Germans. “We made supportive statements of Israel and our desire for more factual coverage, and this put us under attack as disloyal to Germany in a country where left-wing sympathy to Arab groups has a long history,” he said. For Kramer, one lesson was the need for Israel to become more actively involved in promoting its agenda to the European public. “The Israeli government will never understand that this is a media war, that they have to have a way to explain their position. Their attitude towards Europe is, ‘They’re all anti-Semites, so we shouldn’t care what they think,’ ” he said. “Israel doesn’t provide the necessary information to assure positive media coverage. We in Europe are not a high priority.”