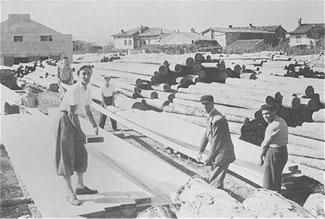 Italian Jews perform forced labor at a lumber mill in Gorizia, Italy, in 1942.

The compromise, announced in October by Culture Minister Francesco Rutelli, was the result of talks between the respective Jewish communities and city administrations. According to the ministry’s press office, no further formal act or approval is required.

Preparations for the two museums are going ahead, but construction hasn’t begun yet, leaving the door open for further political maneuvering.

The controversy began in 2001 when, prompted by political figures who were natives of Ferrara, the government assigned some $20 million to the city to establish a Holocaust museum. Discussions and planning dragged on, with little real progress on the project.

“The Ferrara Jewish community itself has not been really involved very much, it has been the CDEC,” the Contemporary Center for Jewish Documentation, “that has represented the Jewish point of view in these discussions,” he said. “The result today, more than five years later, is that nothing has been decided, not even the site for the new museum. Rome, instead, has forged ahead and is about to start building.”

In 2005, after years of behind-the-scenes wrangling, Rome took advantage of Ferrara’s inaction and made its own public claim. The city purchased a site on the grounds of the Villa Torlonia, the residence of dictator Benito Mussolini from 1925 to 1943. Beneath the villa are Jewish catacombs from the Roman era.

A consortium of private companies and banks assured the Rome project initial funding of $15.8 million. Architects Luca Zevi and Giorgio Tamburini completed plans for the structure, which the city said has a projected completion date of 2008.

On Dec. 22, Rome Mayor Walter Veltroni announced that “Italy’s Holocaust museum will be in Rome, in the Villa Torlonia. It is only right that it should be in the city which suffered most.”

Veltroni said he hoped the museum would open Oct. 16, 2008, the 65th anniversary of the German capture of more than 1,000 Jews from Rome’s ghetto, a major Holocaust episode in Italy.

Veltroni has asked Holocaust survivor and activist Elie Wiesel to be the museum’s honorary president, and said that Wiesel has accepted.

“The Ferrara-Rome compromise was reached after long and difficult negotiations,” said Zevi, a prominent member of Rome’s Jewish community and a professor of architecture at Rome’s largest university. “But at this point it seems to have been accepted by all parties concerned, and both cities are going ahead with their projects.”

Both cities have maintained that they have the historical justification, and so should have the honor, to host the museum.

Italian Jewry suffered somewhat less than other Jewish communities in Europe. The fascist regime passed so-called “Race Laws” in 1938 banning mixed marriages and barring Jews from having commercial licenses, belonging to professional registers, teaching or learning in state schools or universities and serving in the armed forces or as civil servants, but went no further.

When Italy surrendered in September 1943, however, the Nazis began mass roundups and deportations that lasted until 1945. From a Jewish population of 40,000 to 50,000, about 10,000 were killed — 8,500 in the concentration camps, the rest in executions or fighting as partisans.

Rome thus claims that its Jewish community suffered more than any other in Italy and that the city should host the museum. Moreover, Rome today has Italy’s largest Jewish community, about 14,000, and the oldest community in Europe, dating back to well before the Common Era.

Ferrara had a prewar community of about 700, of whom 100 were deported and only one or two returned. Today it has 120 registered community members.

But Ferrara, located about 250 miles north, boasts a richer Jewish cultural tradition than Rome. A crossroads of European Jewry over the centuries, it was a thriving capital of Italian Jewish culture with strong links to other Jewish communities in northern Italy and the rest of Europe. Rome, meanwhile, was mostly a poor and uneducated community that was closely controlled, oppressed and kept in a closed ghetto until 1870.

Ferrara also can claim to represent geographically the various cities of northern Italy with substantial Jewish communities — Milan, Turin, Bologna, Trieste, Venice, Leghorn and Florence — from which most of the other 7,000 Italian Jewish victims of the Holocaust came.

Even if the structures are split as the compromise dictates, the rivalry may continue in seeing which museum opens first and how well-designed they are. At the moment, Rome seems to heavily outgun Ferrara.

But while Rome already attracts massive tourism with scores of museums and monuments, for the small town of Ferrara, the Museum of Italian Judaism would have proportionally greater weight and could generate intense local support.