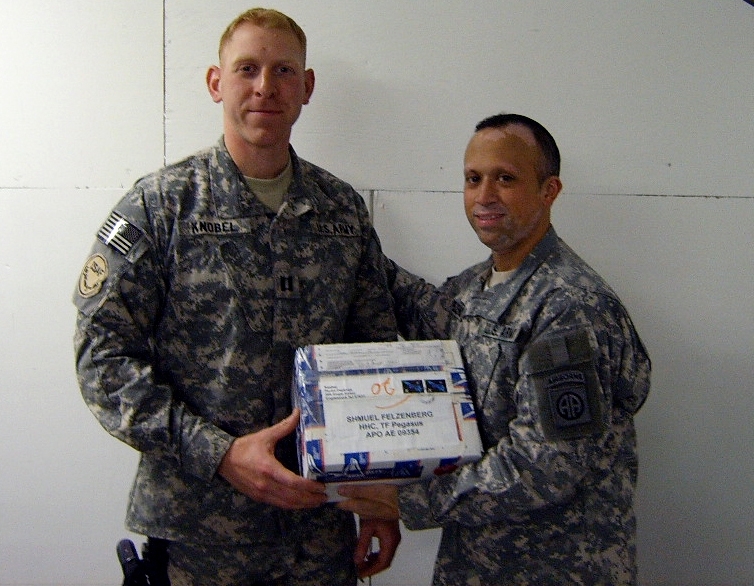 WASHINGTON (JTA) — Imagine what Esther and Mordechai could have accomplished with YouTube. A New Jersey synagogue has seized upon the latest Internet technology to send the Purim message to far-flung U.S. Jewish troops and raise funds for gift packages, or mishloach manot.The YouTube message, performed as a good-natured spoof of an Oval Office address, has exceeded expectations.In conjunction with the Jewish Chaplains Council, headquartered in New York, Kehilat Kesher, a modern Orthodox shul in Englewood, N.J., has sent more than 150 Purim gift packages to Jewish servicemen and women in Afghanistan. The synagogue originally projected funds for about 100 packages.Donations have come from across the country, according to Kesher president David Polinsky, who plays the president in the YouTube comedy short.It may be the first time the phrase “my fellow Americans” has been coupled with “mishloach manot.” “Because it takes quite bit of time to ship overseas, we sent several thousand dollars worth of goods” that were “special requests from the chaplains from Iraq and Afghanistan,” Polinsky said. As funds continue to arrive, he said, “we will be shifting to sending Pesach packages, to keep sending stuff over depending on requests as money is raised.” So far, the synagogue has have raised more than $4,000. Jewish soldiers sent requests for items such as rugelach, gefilte fish and Jewish reading material, Polinsky said.They also requested more secular products like movies and magazines, synagogue trustee Phyllis Freilich added. Children from Kesher’s junior congregation and Kol Haneshama, a Conservative synagogue also in Englewood, wrote letters to the soldiers. Participants sent money for care packages through an online PayPal account accessible on the synagogue’s Web site, www.keshernj.org.The packages were assembled by Freilich and two other congregants, Jocelyn Jonas and Tovit Schultz Granoff. Freilich kept in e-mail contact with a lay leader and chaplain abroad, Army Specialist Gavin Ellman, stationed in Iraq, and Rabbi Shmuel Felzenberg in Afghanistan. Felzenberg received 50 care packages from Kesher and has shared them with Capt. Joshua Knoebel, who serves as Jewish lay leader to remote areas in Afghanistan. Felzenberg will distribute more on Purim to the troops under his jurisdiction, many of them from the 82nd Airborne Division out of Fort Bragg, N.C.”To all such supporters from across the wide spectrum of the Jewish community, both organizational and individuals alike, I say thank you,” Felzenberg wrote in an e-mail. “Thank you for showing a deployed soldier you care, that you value his/her service, and your acknowledgment that if he/she were not there deployed in harm’s way, then you yourself, or your son or daughter, may well have to be serving instead.”Ellman, also in an e-mail, said he was surprised how quickly the packages arrived, but he could not distribute them yet as most of the troops were at various bases working with Iraqi Security Forces.”For these packages, I had to get with the local Brigade and Battalion chaplains to get an estimate of who might want what and work distribution through the units,” he wrote. “Hopefully in another week the paperwork hangup will be over and I can actually post information and work on actually bringing the community out here together.”Freilich, discussing her role in suggesting the project, said: “My husband is in the Navy Reserve and I am just always thinking of things that can be done, little things I can do to make things easier for people in the military.”Freilich’s husband, Benjamin, is a history buff who designed his office to resemble the Oval Office as a backdrop for the YouTube short. Among other synagogue members who contributed were Uri Rottenberg, owner of New Year Video, and Michael Dube, who played the Secret Service agent standing behind Polinsky tugging at a disembodied phone cord. “I had been wanting to use this medium to promote something worthwhile for a long time,” Michael Granoff, vice president of Kesher, wrote in an e-mail from Israel, where he was attending a conference. “So the six of us took an evening at the Freilichs and ran a number of takes, had a great time and got the piece filmed (as well as a few different scripts which may be used in the future). Uri did a great job weaving in the presidential touches.”The video can be found at www.youtube.com/watch?v=cDCJHJeWkzQ.”We are thrilled with the response” with “more than 600 hits and climbing daily,” Granoff said. “In less than a month the program and the publicity it has attracted have already brought a new family to live in our community, and brought Kesher to the awareness of three others who have or are planning to visit us for a Shabbat.”Polinsky added that the community is trying to “get the message out there to keep in mind our brothers and sisters in Afghanistan and Iraq.””Packages, letters, e-mails, they make all the difference out here,” Ellman wrote. “Knowing that people and communities remember us, and care about us, is really what keeps everybody going.”