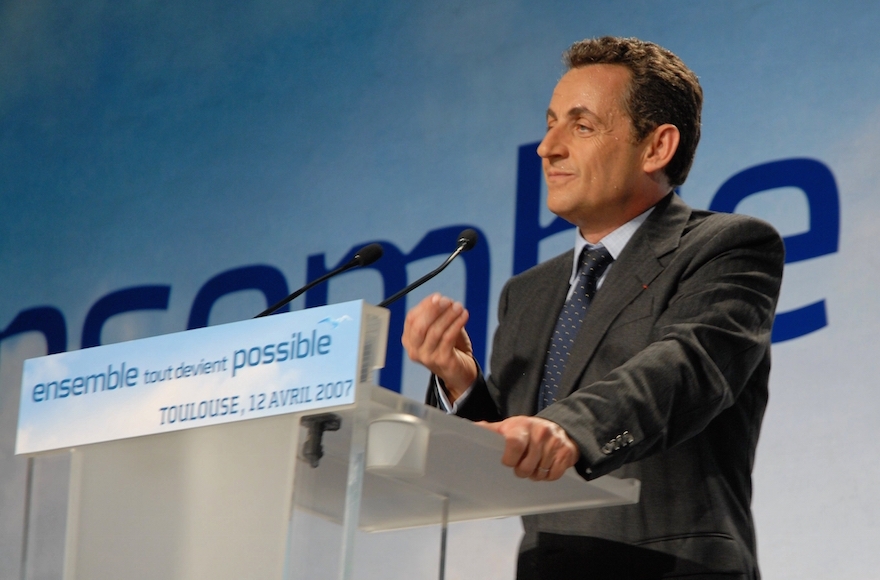 It’s Friday lunch time and the Bagel House, a kosher restaurant in the old Jewish quarter of Paris known as the Marais, is full. Four fashionably dressed students, enjoying their Passover vacation, are talking animatedly.

Tom, who wears a golden Star of David around his neck, has no hesitations about whom he’ll vote for in April 22 presidential elections.

“No good is going to come to France if Segolene Royal,” the Socialist Party candidate, “makes it to the second round of the election. She’ll drag France back to the past,” Tom says.

Nicolas Sarkozy of the Conservative Party “is my candidate, and don’t even try to ask me about” Francois Bayrou, president of the Union for French Democracy, a centrist party. “He has no chance anyway,” Tom says.

Marine, a law student at the Sorbonne, agrees.

“France is in a difficult period. We need to put the economy back on its feet,” she says. “Segolene Royal has no real solutions. Nicolas Sarkozy, on the other hand, has some positive ideas about encouraging economic growth and industrial development.”

An April 15 opinion poll showed Sarkozy who has led the race from the beginning still in front with 26 percent of the vote, Royal next with 23 percent and Bayrou at 21 percent, with right-wing extremist Jean-Marie Le Pen getting 15 percent.

The campaign has focused on employment and economic growth, but public interest lately seems to have shifted to immigration, the integration of newcomers into French society and French identity vs. French values of equal opportunity and openness.

Royal, 53, served as education minister under President Francois Mitterand, and currently serves as president of her region. Her campaign aims to sell French people a warm and caring candidate who is concerned with their day-to-day problems, not international politics.

The campaign of Bayrou, 55, who served as education minister in several conservative governments, has f! ocused a lmost exclusively on domestic issues, though his supporters say a Bayrou administration would herald warmer relations with Israel.

For Tom, Marine and their friends, Sarkozy, 52, represents a new breed of politician: He’s aggressive and outspoken, a bit like members of the North African Jewish community in France. He’s never short of words, likes to hang out with celebrities and doesn’t hide his taste for the good life.

Though he’s a bit of an immigrant himself his father came from Hungary and one of his grandfathers was a Greek Jew Sarkozy is tough on immigrants who break the law or don’t want to integrate into French society.

A month ago, Sarkozy suggested that if he forms a government he’ll create a post of immigration and national identity minister, a controversial proposition even within his own party.

Simone Veil, a Holocaust survivor and former Cabinet minister who recently joined Sarkozy’s team, said the idea makes her uneasy. The left, for its part, says the proposal “has a racist smell.”

Marine’s friend, also a student, is more outspoken then her colleagues.

“Immigration, lack of security, the rise of Islam in Europe that’s what’s at stake,” she says. “Sarkozy is in favor of a free-market economy. He wants to make immigration to France more difficult, fewer foreigners, less Arabs. He’ll straighten up the situation of all illegal immigrants.”

Rene Kayat, leader of a synagogue in Paris’ 11th District, also is troubled by immigration.

“I believe in the French model of a ‛welcoming country’ ” toward immigrants, he says. “It’s good that people are free to come here, but it’s important that once here they find a job and integrate into society, not just profit from the French social system.

“Integrating does not mean that they have to give up their values; both ways of life can coexist,” he continues. But he adds, “nobody can come to a country and expect to immediately have all the benefit! s and ri ghts.”

Kayat implies that he’ll vote “more to the right,” since he doesn’t think Royal is ready for the presidency.

“One has to have the right experience, to know how to act on the international scene. Royal does not have this experience,” he says. “She does not see the large picture. She might be ready one day, but not yet.”

The Jewish community indeed seems to favor Sarkozy, despite French Jews’ tradition of activism in the Socialist Party.

Dominique Straus-Kahn, a former economy minister, and Laurent Fabius, a former prime minister, two Socialist Party stalwarts, were both of Jewish origin. Famous Jewish intellectuals led the French left through its heyday in the 1960s and ’70s.

When Francois Mitterrand ran for president in 1981, many French Jews supported him, “punishing” then-President Valery Giscard d’Estaing for his “anti-Israel policy” only to be disappointed when Mitterand received Palestinian leader Yasser Arafat at the Elysee Palace.

But today’s French Jewish community, the biggest in Europe, is different. Jews of Ashkenazi origin, who now make up only 20 percent of the community, represent the old generation. The new generation, sons and daughters of North African immigrants, have brought a new style to a community that 40 years ago was slowly but surely losing its edges in France’s republican melting pot.

The Jews of North African origin are strongly attached to Israel, don’t hide their ethnic affiliation and don’t fear a charge of “dual loyalty” to both France and Israel. The young generation doesn’t bow to the old French Jewish model of being French first and Jewish later, and aren’t embarrassed about showing a “communitarian” preference for a particular political candidate:

“I live in Neuilly,” a very chic suburb of Paris where Sarkozy is mayor, one of the students at the Bagel House says. “Sarkozy always comes to the synagogue on Yom Kippur. He has excellent relations with the community.”

Re ne Kayat’s synagogue, on the other hand, is located in a busy commercial and middle-class neighborhood. It’s a Sephardic community, and most members are shopkeepers and businessmen. They all have relatives in Israel whom they visit frequently.

Many of the community’s young, in fact, are leaving France for Israel. Kayat is worried not for them but for those who stay behind.

Despite the polls, both Kayat and Eric Darmont worry that Le Pen could manage to make it to a second-round runoff, as he did in 2002.

“Most of our community will probably vote for Sarkozy, but I’m going to vote for Francois Bayrou. It’s time to reassemble every one instead of being divided, time to stop the rift between right and left and to join forces against the extreme right,” Darmont says. “The press tries to convince us that Sarkozy will face Royal in the second round, but it’s . It’s a manipulation. Everybody knows that one incident or one terrorist attack will be enough to immediately bring Le Pen to the second round. It’s very dangerous.”