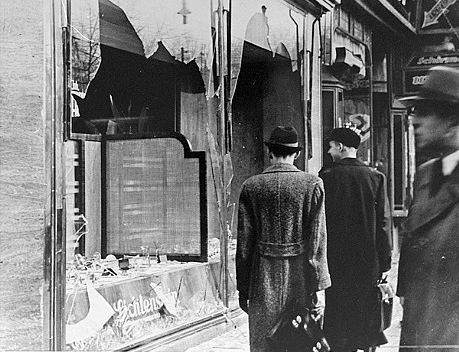 Germans pass by the broken shop window of a Jewish-owned business on Nov 10, 1938, that was destroyed during Kristallnacht. (USHMM, courtesy of National Archives and Records Administrat)
Advertisement

NEW YORK (JTA) – With threats to the Jewish people emanating from so many directions – a nuclear Iran, the demographic challenges of American Jewry, the rise in anti-Semitic attacks around the world – a succession of leaders has warned that Jews face as much peril today as on the eve of the Holocaust. But when the Center for Jewish Studies at Queens College in New York City convened a conference this week on the state of world Jewry – ominously titled “Is it 1938 again?” – the consensus was a resounding “No.”Virtually every presenter at the gathering April 22-23 noted the limits of any analogy to 1938. That was the year of Kristallnacht and the surrender of the Sudetenland to Nazi Germany in a policy now known disparagingly as appeasement, symbolizing Europe’s failure to appreciate the depth of Hitler’s ambitions.Presenters noted instead the obvious differences today, including the existence of a Jewish state with a strong army; the power and wealth of Jews in the West, particularly in the United States; society’s general intolerance of brazen anti-Semitism, even if the more subtle anti-Zionist variety is increasingly accepted; and a greater assertiveness by Jews, as demonstrated by the very fact of a conference convened to address the threats to Jewish survival.Nevertheless, the question of how concerned Jews should be has been raised with increasing frequency in recent years, particularly since the collapse of the Oslo peace process and the outbreak of the violent Palestinian intifada in 2000.Yet insofar as the specter of a new 1938 was debated at all, the conference concerned its utility as a framework for thinking about a Jewish response and, to a lesser extent, about what that response should be.At best, it was suggested at the conference, 1938 is useful for focusing Jewish attention and energy, and spurring action. At worst it can become a dangerous obsession with the past that creates unwarranted pessimism and obscures today’s opportunities.”Calling the conference ‘Is it 1938 again?’ was intended to provoke debate about the dangers facing Jewry today,” said William Helmreich, a sociology professor and director of the Center for Jewish Studies. “It was a paradigm rather than a literal comparison.”That the question was raised at all reflects the unease in certain sectors of the Jewish community.Malcolm Hoenlein, executive vice chairman of the Conference of Presidents of Major American Jewish Organizations, captured that feeling in an address at the opening session.In a speech that even Leonard Fein, the author and professor who was chosen to respond to Hoenlein, described as “extraordinary,” the veteran Jewish activist tore through a litany of threats to the Jews, his pitch rising in indignation as he jabbed the air for emphasis.Hoenlein invoked not only the obvious threat to Israel posed by a nuclear Iran but the danger of European anti-Semitism, the tendency to appease Israel’s enemies and the attempts to silence Jews with charges – increasingly visible in mainstream media – that a pro-Israel conspiracy controls policy in Washington. He warned that the “British model,” in which anti-Israel feeling among the elites begins to “trickle down” to the masses, is taking root in America.The point was not that catastrophe is upon the Jewish people but that it could be absent resolute action.”I think that for the Jewish community, this is a time we are being tested,” Hoenlein said.Fein didn’t dispute Hoenlein’s description but challenged his level of emotion, suggesting that comparisons to 1938 don’t help in formulating a response to the threats.”Those obsessed by history are as likely to repeat it as those who forget it,” Fein said. “The mantrification of 1938 is hardly a policy.”Fein cautioned that a fixation on the past blinds Jewish people to opportunities today, particularly what he called a “breathtaking” Arab peace proposal offering Israel normalized relations with the Arab world in exchange for withdrawal to Israel’s pre-1967 boundaries and a vague acceptance of the Palestinian demand for a refugee “right of return” – which some warn is tantamount to demographic suicide.”History is a fickle teacher,” Fein said. “If we do not probe what lies behind the windows that are open, those windows will close and we will have only fetid air to breathe.”The limits of the 1938 analogy were even more evident in considering Jewish demography, where warnings about intermarriage and assimilation have been a staple of communal discourse for nearly two decades, and the growing gulf between Israeli and American Jews.But when applied to the risk of physical violence against Jews, 1938 has a greater resonance.
Author and translator Hillel Halkin offered the remote possibility that
vast Jewish migration from the West could forestall the demographic
threats to Israel that in the long run he believes are greater than the
military ones.Bucking the consensus against a 1938 parallel, Rabbi Yechiel Eckstein, president of the International Fellowship of Christians and Jews, answered the conference question with an “emphatic yes.”Eckstein called for a strategic alliance with evangelical Christians – “our best friends and closest allies.” He brushed off concerns about their supposed ulterior motives – converting Jews and advancing Armageddon – as a “figment of, if I can say it, this liberal, Jewish and journalistic imagination.”While Eckstein offered a possible solution, David Pryce-Jones, the soft-spoken Oxford University professor and senior editor of the National Review, presented perhaps the gloomiest prognosis at the conference.Pryce-Jones described the threat to Europe and its Jews from a large, alienated and unassimilated Muslim minority that he warned would increasingly turn the continent toward fascism.Asked why Europe seemed so complacent in the face of threats to its identity and culture, the normally witty and articulate Pryce-Jones could only stammer in response.”If push comes to shove, we’re in for tremendous bloodshed,” he said.