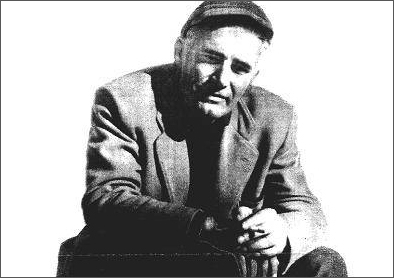 Khaled Abdelwahhab, the first Arab to be nominated as a Yad Vashem righteous gentile. (Courtesy of Yeshiva University)
Advertisement

NEW YORK (JTA) – Some see Khaled Abdelwahhab as an “Arab Oskar Schindler” for risking his life to shelter Jews while Tunisia was under Nazi occupation. Robert Satloff, executive director of the Washington Institute for Near East Policy, sees the Tunisian farmer as “a very powerful symbol from a historical point of view.”He believes Abdelwahhab’s tale of heroism, and other stories Satloff collected of Arab actions during the Holocaust
– from indifference to collaboration to attempts at saving
and sheltering Jews – would “turn the discussion of the Holocaust on its
head” in the Arab and Muslim world, where Holocaust denial is rampant.Speaking about his latest book, “Among the Righteous: Lost Stories
from the Holocaust’s Long Reach into Arab Lands,” on April 25 at Yeshiva University in New York, Satloff said the stories of Abdelwahhab and others reveal no
difference between reactions to the Holocaust in Europe and the Arab
world. Event sponsors included Y.U.’s Stern College for Women and the Simon Wiesenthal Center.Satloff said the book explains that the Holocaust is part of both the Arab and
Jewish experience. He nominated Abdelwahhab, who hid 24 Jews on his family
farm for months during the Nazi occupation, for the distinction of “Righteous Among the Nations” at the Yad Vashem Holocaust Memorial in Israel. Abdelwahhab would be the first Arab among nearly 22,000 “Righteous Gentiles.”Spreading the word about Abdelwahhab’s actions could help breed the kind of tolerance needed to heal rifts
between the Arab and Jewish communities, Satloff said.Abdelwahhab’s daughter Faiza, who joined Satloff at the Y.U. presentation, said she hopes her father’s story will “help Jews
and Arabs to become more like they were in Tunisia” before World War II.”We
were very mixed,” Faiza said of the town where she grew up. “Thirty percent
were Italian and French. Thirty percent were mixed [Arab and French], and 30 percent were Jewish. Everyone got along together very well.”Faiza remembered her father as a
“very stubborn person” who saw no difference between the various
ethnic and religious groups in his hometown.Satloff said Abdelwahhab’s nonchalance about his actions was similar to that of other non-Jewish rescuers during the Holocaust.”They have very humble
motivations,” Satloff said. “I don’t see any difference here.” Faiza said she did not learn that her father had sheltered Jews until
Satloff uncovered it while researching his book.But she wasn’t surprised. Since Abdelwahhab, who died 10 years ago, lived in a society with fewer
distinctions separating people, she and Satloff both characterized
his deed as a “natural” thing to do for his fellow
countrymen.Satloff
hopes that for the Arab world, recapturing this neglected aspect of its history will mean accepting the basic premises of the Holocaust. Holocaust denial is rampant in the Arab world, even in schools and government-sponsored media, with many Arabs apparently believing that denying the Holocaust will undermine Israel’s legitimacy.Satloff said the Sept. 11, 2001, terrorist attacks provided the “trigger” for his work, as he began to deeply
consider the societies from which the attackers sprang.”It
got me thinking about Holocaust education in Arab society,” Satloff
said. The book “is my modest way of fighting the hatred of 9/11.”He said he tried “to make the Holocaust a story acceptable to Arabs. So I talk about choices Arabs made; it’s an Arab story.”With the book available in Farsi and Arabic, Satloff hopes it will help counter the “grotesque view of the Holocaust that is being propagated” in the Middle East and allow Arabs to “access their sides of the story” of the Holocaust.