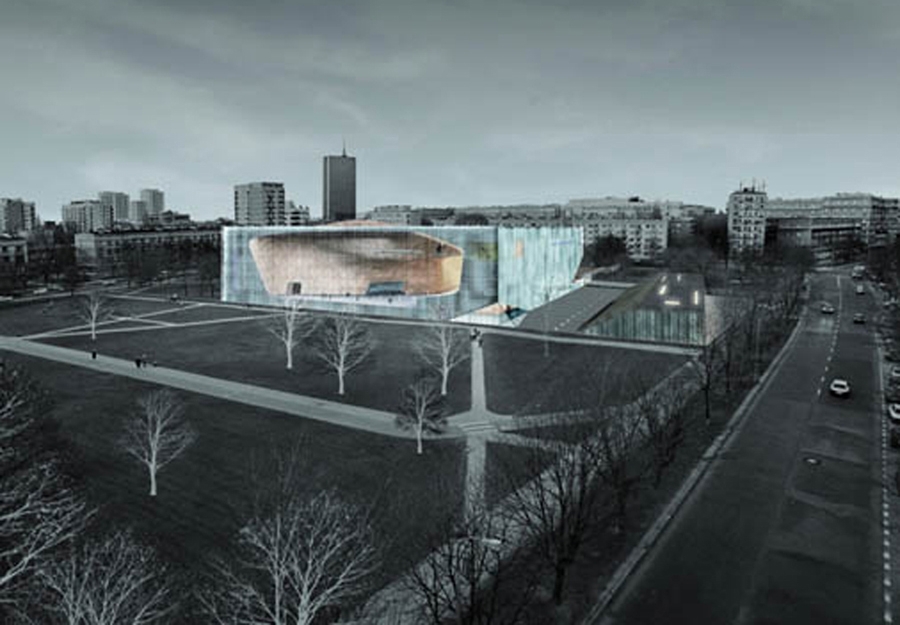 PRAGUE (JTA) – Supporters and staff of a new museum on Polish Jewry are hoping a high-profile groundbreaking ceremony will draw in the additional funds needed to finish what aims to be Europe’s largest Jewish cultural attraction under one roof.The June 26 groundbreaking at the site in Warsaw where the Museum of the History of Polish Jews is scheduled to open in 2009 will feature a speech by newly elected Israeli President Shimon Peres.Peres, a native of Poland, was one of the early supporters of the $65 million museum, where visitors in eight galleries will be able to explore the 1,000-year history of Polish Jewry.President Lech Kacynski will also speak at the groundbreaking ceremony,
which will feature performances by the Vienna Philharmonic and the
Choir of Polish National Opera.The
Polish government was an early champion of the museum, providing $27
million in funding from federal as well as city coffers. The city of
Warsaw provided the land for the five-story, 200,000-square foot
structure designed by a Finnish architectural team. Last year, the
German government donated $6.31 million for the museum.”This is more than just a groundbreaking and much more than just a ceremony,” said Tad Taube, a Polish-born philanthropist who lives in San Francisco.”‘It is, in the presence of Israel’s president, a vivid reminder of the rich history of Poland’s Jewish community and a celebration of its renaissance,” said Taube, a major contributor to the museum.The Taube Foundation for Jewish Life & Culture is a chief supporter of a Jewish revival in Poland, where some 10,000 Jews live. Many of them have only recently discovered their Jewish roots. Prior to World War II, Poland had the largest number of Jews in Europe, about 3.5 million, or 10 percent of the population. Most were killed by the Nazis.”I’m especially proud to be bringing to the groundbreaking more than a dozen American community leaders and philanthropists to share with them our passion for remembering and celebrating our past, present and future,” Taube wrote in an e-mail.A pleasant surprise for the museum, according to its deputy director, Ewa Wierzynska, was that U.S. President George Bush announced in early June that he would send a team of representatives to the groundbreaking.The White House team will include Tevi Troy, deputy assistant to the president for domestic policy; Cheryl Feldman Halpern, board chair of the Corporation for Public Broadcasting; and Michael Kaiser, president of the John F. Kennedy Center for the Performing Arts “This will definitely make a big impression in the international arena,” said Wierzynska. The museum is located next to the Ghetto Heroes’ Memorial monument in what once was Warsaw’s Jewish district. Its key message is about life, not death, in a country where the Holocaust and anti-Semitism are the two issues many foreign tourists most associate with Jews. One reason Polish leaders are so enthusiastic about the museum is the movement away from that trend. Calculating that 50 percent to 75 percent of the world’s Jews trace
their ancestry to Poland, museum officials estimate that some 500,000
visitors will visit the museum annually.Wierzynska said having such influential personalities at the groundbreaking will finally put the museum on the international media map.Along with a higher profile, the museum still needs $10 million to $15 million to support its permanent galleries, she said.Wierzynska said the additional funds are needed for cutting-edge technology,” so the museum can be as good as its subject deserves. Cost-cutting measures are in place in case the additional funds are not raised, she said, but the major funds to create a “good, contemporary, multimedia, narrative institution are assured.”The museum’s director, Jerzy Halbersztadt, said that one-third of the private funding has come from American donors, with major contributions from Taube, Victor Markowicz and Sigmund Rolat, who since March has been fund raising for the museum as chairman of its North American Council.”Nothing that I am involved in is as close to my heart as the museum,” said Rolat, a Polish-born New Yorker who survived the war in a Nazi work camp in his native Czestochowa. “I do it for my grandchildren.”Rolat says the fund raising should become easier after the groundbreaking.”It wasn’t easy to raise money for a dream,” he said, “but now it’s a reality.”