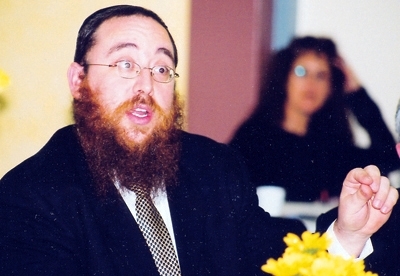 After losing in the Australian courts, Rabbi Yossi Engel is taking the case against his former congregation to the London Beth Din. (Courtesy of Australian Jewish News)
Advertisement

SYDNEY,
Australia – A U.S.-born rabbi who was sacked last year is at the center of a
bitter legal battle with the board of an Orthodox synagogue on the edge of the Australian outback.

Rabbi Yossi Engel, 40, lost his appeal on June 26 in the Supreme Court of South
Australia to overturn a verdict by a district court judge who had ruled in
favor of the board of Adelaide Hebrew Congregation.

Now the Brooklyn-born
Chabad rabbi and the dwindling Adelaide Jewish community are set to take their dispute to a religious court halfway around the world,
in London.

The
six-month legal fight – which prompted the congregation’s president to resign
and sparked a scuffle involving the rabbi that required police attention – has
rocked the community of less than 1,000 Jews, costing it in excess of $90,000
and leaving it without a religious leader. It also has proven to be a black
mark for the Chabad-Lubavitch movement to which Engel belongs.

One
Lubavitch insider, who spoke to JTA on condition of anonymity, said the saga
was “tremendously embarrassing” for Chabad.

On the Web site of the
worldwide Chasidic movement, the listing of Chabad centers in Australia
includes a reference to “Chabad of South Australia.” But the link has been removed –
Chabad officials in the United States decided to sever themselves from Rabbi Engels’
imbroglio, according to the Lubavitch source.

“It was felt that what he was doing was bringing discredit to the Chabad
organization,” he said. Since the board of the Adelaide synagogue cannot appoint a new rabbi until
the case is resolved, the Rabbinical Council of Victoria has organized for
rabbis to travel from Melbourne to help support the congregation.

The synagogue has the only Orthodox congregation in Adelaide, which with 1.1 million is the most populous city in the state of South Australia.

“It is pretty much paralyzed,” he said, “but they will live to see another day. No
question about it.”

Engel originally had demanded the contractual dispute be resolved by a din
Torah, or rabbinic arbitration, under the aegis of the beth din, or rabbinical
court, in Sydney, which has jurisdiction over Adelaide. But the synagogue board
refused because it maintained Engel’s contract was a civil agreement, not a
religious one.

As a result, the Sydney Beth Din issued a ktav siruv, or order of contempt,
against the board, effectively severing the congregation’s ties to the Orthodox
world.

The contempt order was lifted in May when the parties agreed to have the
case heard by the London Beth Din.

In
their recent decision, the Supreme Court judges agreed that Rabbi Engel’s
contract had expired on Dec. 31. But Engel hopes the London Beth Din will
reinstate him, or at least clear his name.

South Australian Chief Justice John Doyle said in his verdict that the rabbis
in London could not order Engel back to his pulpit.

“An order requiring
the congregation to reinstate Rabbi Engel as its rabbi is not an order that
could be enforced,” Doyle said.

In
any event, the registrar of the London rabbinical court, David Frei, told JTA
the logistics of judging a case across the globe had yet to be worked out.

One possibility being debated is for a dayan, or judge, to fly to Australia to
hear submissions from both parties.

“For us it’s business as usual, and we
are getting back to doing what we’ve always done,” Bolaffi said.

But he said Engel believed he worked for a higher authority.

“He claimed lifetime tenure, that he worked for God,” Bolaffi said.

The board apparently resolved not to reappoint Engel because of a
major personality clash. In addition, the board reportedly was unhappy with
Engel’s kosher supervision in South Australia, among other
performance-related grievances.

Engel
told JTA that he could not comment. His lawyer, Ron Bellman, said his
client’s contract had been breached because he was dismissed without a
performance review.

“There’s been
a real smear campaign to discredit Rabbi Engel and lower him in the estimation
of right-minded people,” Bellman said.

Rabbi
Jeremy Lawrence, the registrar of the Sydney Beth Din, said the dispute was “hugely
regrettable.”

“It’s a tragedy because profound acrimony got in the way of normally
decent people being able to resolve a very difficult employment issue,” Lawrence said.

Last year David Ninio, the former president of the board, resigned over the
dispute, and in March police were called to a synagogue scuffle between Engel
and two board members.

Adelaide, known as the City of Churches, also has a Progressive shul and a
Jewish school, Massada College, which last year managed to stave off closure at
the 11th hour because of declining enrollments and spiraling debts.