Hanging out with Hadassah men 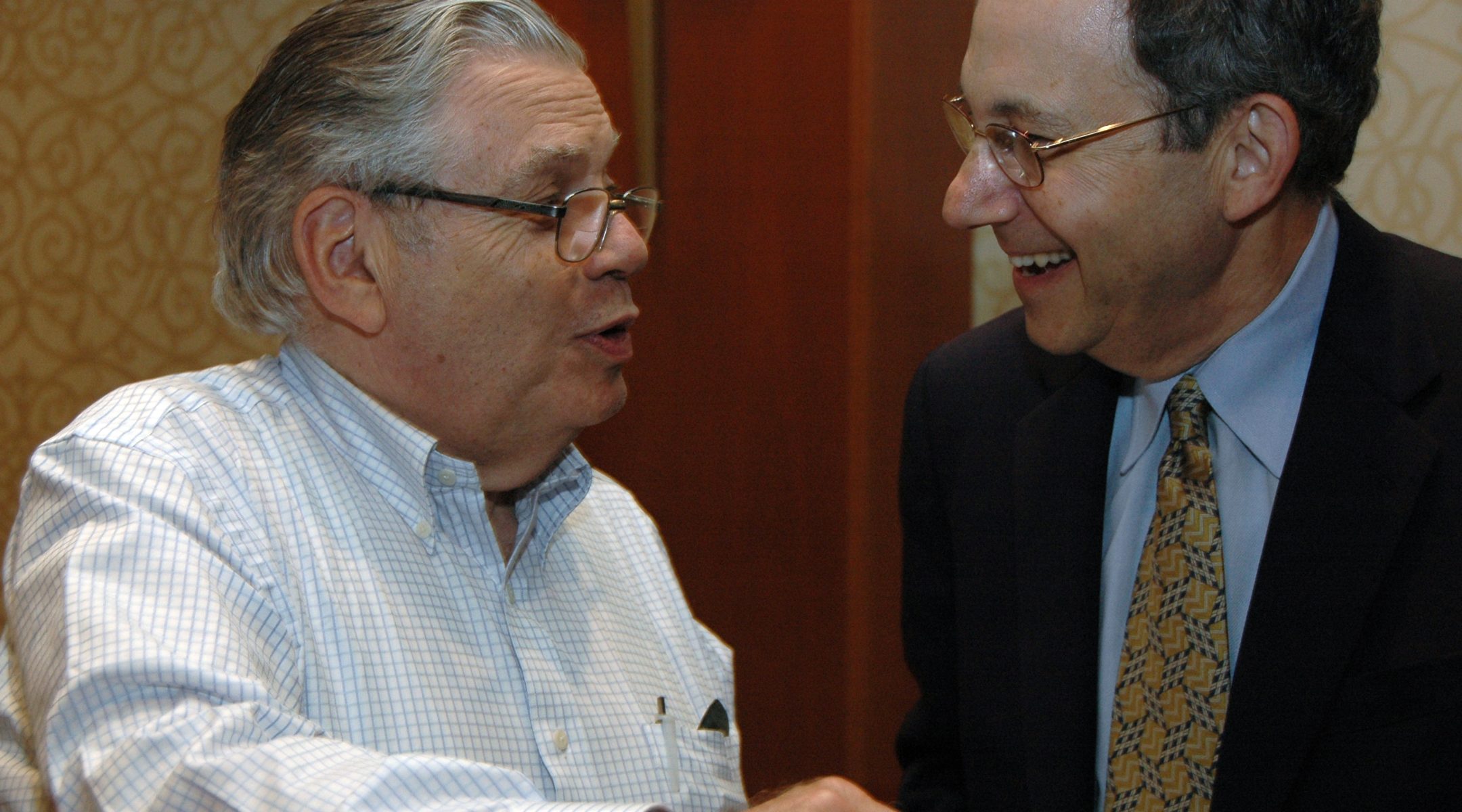 Fraternal order of Hadassah: Barry Walker, left, and James Smith are two of the 30,000 men who are associate members of Hadassah: Women's Zionist Organization of America. (Courtesy of Hadassah)
Advertisement

NEW YORK (JTA) – Barry Walker has been a bigwig at several charities, but at the annual international convention of Hadassah he was known as “June Walker’s husband.”

At Hadassah, the Women’s Zionist Organization of America, such a title essentially qualifies as royalty: Walker’s wife, after all, is the group’s outgoing national president and recently was named the chairwoman of the Conference of Presidents of Major American Jewish Organizations.

Yet Barry Walker was not at this week’s convention only as the first husband of Hadassah. He is one of about 30,000 Hadassah associates – dues-paying, quasi-members of the women’s organization who just happen to have a Y chromosome.

At the Hilton Hotel here, some 250 associates mixed with 2,500 female attendees. These certified Hadassah men – 95 percent of whom are married to members – weren’t hard to spot. Mostly seniors, some followed their wives through the convention’s craft bazaar, while others were found in hotel corridors waiting somewhat listlessly for the return of their spouses.

As one Hadassah professional put it, “Behind every Hadassah leader is a good associate.”

One might think of the associates as something of the men’s auxiliary club. Some, however, would warn against it.

“We don’t call them the auxiliary,” said the liaison between the associates and Hadassah, Sandra King. “They get really testy about that.”

The associates program started in 1967 as a way to bring men into the fund-raising fold, according to its outgoing president, James Smith.

“It all started because many, many men participated in what their wives were doing, and many men were helping their wives surreptitiously in the background and really wanted an identity of their own,” June Walker told JTA. “So we created the associates and it gave them a sense of uniqueness.”

Now the more than 30,000 men officially affiliated with the women’s group comprise a tenth of the organization’s overall membership.

Though they have no votes and no official say in how Hadassah runs its business, their membership fees are put toward an endowment fund that now has $10 million. And last year the associates brought in some $2 million through their own fund raising.

That may seem like a drop in the bucket compared to the $154 million that Hadassah raised last year. Yet keeping men close to and involved in the organization is vital, Smith said, since families often make their charitable decisions together.

For instance, when Detroit billionaires William and Karen Davidson decided to give $75 million to Hadassah in March, they did so in part because Davidson’s mother, Sarah Wetsman Davidson, founded the organization’s Detroit chapter.

Some of the associates’ activities stick to stereotype: The men typically run programs that focus on testicular and prostate cancer, and when Hadassah built a youth campus in Israel, the men dedicated the gym. Their Web page offers tips on how to arrange three types of fund-raising events: those centered on sports, golf and politics.

Judging from the convention, it seems that at least within the Hadassah context, the men have learned to acquiesce to their better halves.

In a question-and-answer session with Columbia School of Journalism Professor Samuel Freedman that was run by the associates, women asked the questions until Smith cajoled a couple of men to step forward.

When an associate posed a query, one female Hadassah member turned to her friend and said with a snicker, “Finally, a real man.”

So have the men of Hadassah finally found their place or been put in their place?

By most accounts, the history of men at Hadassah has been complex, fluctuating between assertiveness and passivity. Smith and Barry Walker both said that some early associates joined the organization simply as a backlash against the women’s liberation movement. Some tried to hijack the organization.

The associates have waged a long struggle for even a bit of autonomy.

From the early days they had few rights. In the late 1970s, a debate even broke out about whether associates should receive two of the perks showered on female members: Hadassah Magazine and a Hadassah paperweight.

Even when the associates’ numbers grew to 20,000 during the 1980s, and one year raised $1 million for the Cardiac Surgical Suite at the Hadassah Medical Center in Ein Kerem, Israel, it wasn’t until 1994 that they were allowed to form their own board and officers.

Once that happened, Smith said, some of the male leadership tried to bully their way into Hadassah leadership.

These days, according to the incoming president of the associates, Howard Kaplan, there is no strife at Hadassah between the genders – the men and women work together. As for the future, he sees the associates as a very serious and growing part of the organization.

“We have over 30,000 members now, and we are not in competition with the women; we sit alongside the women,” said Kaplan, an attorney from Chicago with leadership experience in many Jewish organizations. “We want a membership of 300,000 because every member has a man or grandson or son in law next to them. But the associates are a force now – they are a major fund raising force and a major political force. It is a strong organization, but boy it is going to get stronger.”

As Smith sees it, men and women just think differently. Women are sticklers for protocol and process, he said, while men “don’t have time for that crap.”

“Men don’t know please and thank you,” Smith adds, “but women need that.”

Which is why the associates have required a female liaison to the rest of Hadassah – and why they may never be granted the right to vote.

“Men walk in the door and think because they are men, they can run the place,” June Walker said. “But we won’t give up our controlling interest in the Women’s Zionist Organization of America.”

Or as one organizational leader said off-handedly: “They are part of us, but they report to the mother ship.”