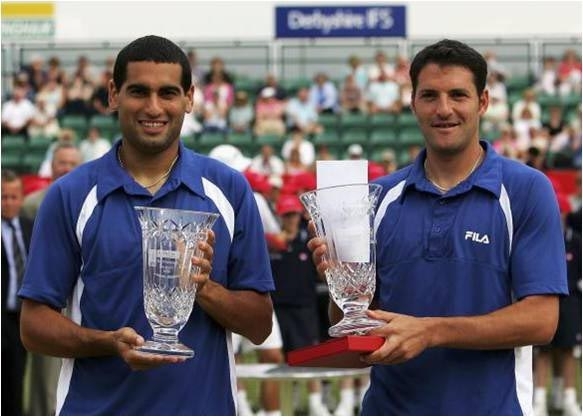 NEW YORK (JTA) – In the philanthropic equivalent of a return volley, two top Israeli tennis players who have received the support of American Jews want to raise money for disadvantaged American Jewish children.

Andy Ram and Jonathan Erlich, a doubles pair ranked sixth in the world, are trying to start a foundation that would provide grants to young American Jews for their athletic training.

Ram, 27, and Erlich, 30, in New York this week for the U.S. Open, told JTA they wanted to give back to American Jews who have financially supported athletic training programs in Israel and opened their homes to them.

Their goal is to create a greater avenue for cultivating athletes in the Jewish community, which typically focuses more on academic and cultural pursuits.

“The foundation is a pretty new idea,” Erlich said. “You don’t see too many Jewish athletes around. We think this will give American Jews a way to find athletes and to give them something different.”

Not that Jews shouldn’t be doctors and lawyers, the athletes said, but both fare well monetarily on the tennis court rather than in the courtroom. Each won nearly $250,000 in 2006 and boast more than $1 million in career earnings.

Plus there is potential income from endorsements in Israel: Ram and Erlich say they cannot walk the streets without being recognized.

Longtime friends, they became doubles partners in 2001. Ram sat out 2002 with back and knee injuries, but they have been Israel’s most successful sports duo since they reunited.

In 2005, they reached the Wimbledon semifinals. The pair have won 10 titles together; this month they won the Western & Southern Financial Group Masters in Cincinnati.

Ram has achieved success without Erlich, too. He became Israel’s first grand slam champion when he captured the Wimbledon mixed doubles title last year with Vera Zvonareva, a Russian. This year he paired with a French player, Nathalie Dechy, to take the French Open mixed doubles crown.

Noting the support they receive from the American Jewish community, Ram and Erlich say they rarely stay in hotels while playing eight to nine months a year in the United States. Rather they spend most of their time with host families.

“We just want to give back to the American Jews,” Ram said.

Their foundation is inspired in part by the Israel Tennis Centers, a network of 14 not-for-profit facilities that teaches tennis and life lessons through the game. Some 350,000 Israeli children, including Ram, have passed through the centers since they opened in 1976.

The centers are funded primarily by American donors – the direction that charity dollars typically flow between Israel and American Jews.

Ram and Erlich are attempting to change the course. Their foundation is in its early stages, according to Leslie Bernstein, a political and public relations strategist who is doing most of the legwork in starting the operation, including trying to attain 501(c)3 status. The tennis pros plan on approaching several prominent American Jewish athletes for funding.

The Israelis say they want to challenge two stereotypes: that all Jews are wealthy and no Jews are athletes.

“When you talk to a lot of Americans and ask about Jewish athletes, the only name you really hear is Sandy Koufax – and that was 40 years ago,” Bernstein said.