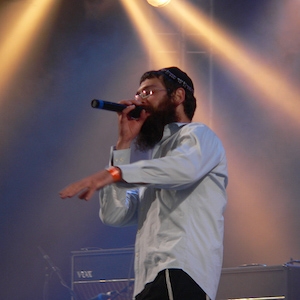 Matisyahu performing at the official opening ceremony of the European Maccabi Games at the Waldbuehne on July 28, 2015, in Berlin, Germany. (Sean Gallup/Getty Images)
Advertisement

“I am no longer identified with Chabad,” the American singer told Ha’aretz this week during a private visit to Israel. “Today it’s more important to me to connect to a universal message.”

Born Matthew Miller, Matisyahu embraced Orthodox Judaism while studying in a Chabad yeshiva in New York City His virtuosity in reggae and hip-hop, religious lyrics and uncanny garb and antics on stage launched him to international music stardom.

According to to the Israeli newspaper, Matisyahu experienced a “spiritual shift” while celebrating the High Holy Days in Israel. That drew to him to alternative forms of Chasidut such as Breslav.

“What we do is not at all about Judaism and not about Chabad. It’s much bigger than one religion or another,” he said. “It relies on something real that can speak to anybody. It’s about truth and memory.”

While still Orthodox, Matisyahu said he is “searching for freedom from a pronounced identification with one
specific group.”