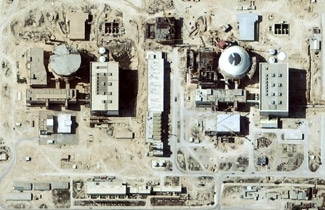 MOSCOW (JTA) – When Vladimir Putin arrived in Tehran this week for the first visit by a Russian leader to Iran in more than 60 years, the event bore an eerie connection to the last such visit, in 1943.

Then, a German assassination plot famously shadowed the wartime summit between Stalin, Churchill and Roosevelt. This week, the Russian president came despite intelligence reports that suicide bombers were preparing to make an attempt on his life.

The coincidence may end there, however.

The meeting between Stalin and his colleagues cleared the way for the opening of the second front against Nazi Germany and the establishment of the United Nations. Putin went to Iran for a summit of the five Caspian nations, and he seemed more intent on shielding the rogue republic than censuring it.

“Not only should we reject the use of force, but also the mention of force as a possibility,” Putin said. “This is very important. We must not submit to other states in the case of aggression or some other kind of military action directed against one of the Caspian countries.”

Putin’s visit comes at a critical moment for the Middle East.

The future of Russian-Iranian relations has direct repercussions for regional politics, Israel’s security and, many say, the security of the free world. Questions about Iran’s nuclear program have overtaken the Tehran summit’s primary agenda of territorial demarcation in the Caspian Sea.

Russia is resisting calls to strengthen U.N. sanctions against Iran, while France and the United States are pushing for them.

Also at stake is Russia’s commitment to the construction of Iran’s first nuclear power plant at Bushehr, in southern Iran.

Putin said U.S. failures in Iraq and Afghanistan demonstrate the problem of a unipolar world dominated by a single superpower.

The president’s remarks did not constitute a significant departure from Russia’s Iran policy, but their delivery in this particular setting, in Tehran, may embolden Iran’s fundamentalist leadership.

Georgy Mirsky, a leading Middle East expert and senior research fellow at the Institute of World Economy and International Relations in Moscow, said there were few signs the summit ever was intended to bear constructive results on overcoming the tensions surrounding Iran’s nuclear program.

“Putin stated at the outset that Russia saw no evidence pointing toward Iran’s pursuit of nuclear weapons,” Mirsky said. “It’s as if he was trying in advance to deflect any international pressure, insuring himself in the case of a failure to achieve any meaningful breakthrough in Tehran.”

The completion of the nuclear plant ostensibly has been held up because the Iranians are delinquent in their payments, but Russian experts say political considerations are the primary reasons for the delays.

“The question was always mostly political, and not financial or technical,” said Vladimir Orlov, a nonproliferation expert and director of the Moscow-based PIR Center for Policy Studies in Moscow. “But what Russia would like to see is some positive, conciliatory steps on the part of Iran to sustain a strategic partnership with Russia.”

Putin met with Iranian President Mahmoud Ahmadinejad and the country’s supreme leader, Ayatollah Ali Khamenei. He also met with the leaders of Azerbaijan, Kazakhstan and Turkmenistan, the Caspian Sea nations that are embroiled in a dispute over the sea’s energy resources.

The president vowed before the trip to negotiate on behalf of the group of six nations actively engaged with Iran. These include Germany and the five permanent members of the U.N. Security Council – China, Russia, France, Britain and the United States.

A Western diplomatic offensive last week on the eve of Putin’s trip heightened expectations that the Russian president could deliver a strong statement to his Iranian counterpart. After talks in Moscow with French President Nicolas Sarkozy, followed by consultations with U.S. Secretary of State Condoleezza Rice and Defense Secretary Robert Gates, Putin made a stop in Wiesbaden, Germany, on his way to Iran for a meeting with German Chancellor Angela Merkel.

But last week Putin also warned that Russia has no evidence that Iran is pursuing nuclear weapons. He reiterated that position in Tehran on Tuesday. In an implicit rebuke to the United States, Putin signed a declaration with the conference’s other four participating countries that excluded the use of any of the Caspian nations’ territory for staging an attack on Iran.

“We are saying that no Caspian nation should offer its territory to third powers for use of force or military aggression against any Caspian state,” Putin said.

The enigmatic Russian president took a somewhat different tone when he met with the European Jewish Congress last week. Then, he characterized Iran as a “strategic threat” and made note of the security threat it poses both to Russia and Israel.