JDC giving to non-Jews going up 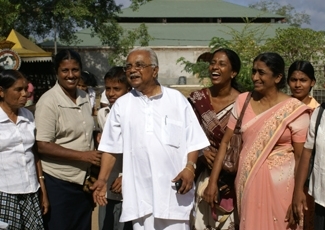 NEW YORK (JTA) – The overseas relief arm of the North American Jewish federation will give more than $8 million this year to non-Jewish causes.

Monday’s announcement by the American Jewish Joint Distribution Committee came here at its annual board meeting.

Officials at the organization say most of the money will go toward ongoing relief efforts stemming from the 2004 Indonesian tsunami and on the Agahozo Shalom Youth Village that JDC is building in Rwanda for survivors of the 1994 genocide there.

JDC has been involved in nonsectarian work since its inception in 1914, and in 1986 the organization formalized its non-Jewish work by creating a separate board, the International Development Program, to oversee and raise funds for such projects.

But the funding for nonsectarian efforts has doubled over the past five years, the JDC’s assistant executive vice president and the head of the IDP, Will Recant, told JTA in a phone interview.

Still, non-Jewish work takes up only a small fraction of the JDC’s $360 million annual budget. Most of the organization’s aid goes to helping underprivileged Jews in Israel, the former Soviet Union and other areas outside of the United States.

At the same time, the organization wants to seize on the philanthropic trend that shows many Jews wanting to benefit causes not because they are aimed at helping Jews, but because they see helping the broader community as a Jewish ideal.

“There has been an increasing interest from many sectors in the nonsectarian work that we do,” Recant said. “We have been able to increase the fund raising, and the number and scope of projects that we undertake.

“It has been evolutionary, and part of that has been as a result of a younger generation that is interested in Africa and Asia and the global arena. The Jewish world cares about people and they want to help.”

In addition, leaders of the organization say that they want to ramp up funding for nonsectarian projects because helping non-Jews is both part of the JDC’s mission and necessary to advance its Jewish causes.

“It opens doors and changes the perceptions of Israelis and the Jewish people,” said Anne Heyman, the lay leader who is spearheading the $5 million Rwanda project, during an address at the JDC board meeting. “In Rwanda, an Israeli and a Jew are considered the same thing.”

JDC has already budgeted $4.2 million for such projects for next year and is seeking another $1.03 million to fund additional efforts, including projects in moderate Muslim countries such as Turkey and Morocco, where the JDC would like to help homeless children, the hearing impaired and the poor who need medical assistance.

Some right-wing critics raised objections when Israeli-Arab causes received a small percentage of emergency aid raised from American Jews to help northern Israel during the war with Hezbollah last year.

Recant said he had “no doubt there would be donors who would be upset” if they knew some JDC money was going to help non-Jews, but added that generally the only money that JDC directs toward nonsectarian causes is raised specifically for such purposes.

Of the $60 million the JDC receives each year from the United Jewish Communities and its parent network of federations, only $500,000 goes to nonsectarian work.

Recant said that slice of the UJC money pays only for infrastructure and the five staff members who run the International Development Program. The rest is raised separately, primarily from Internet mailboxes set up after disasters.

The JDC raised about $18 million in the aftermath of the tsunami and $6.1 million to help in war-torn Kosovo. It also raised $120,000 recently to help victims of the earthquake in southern Peru.

It would like to undertake more long-term projects such as AIDS relief in Kazakhstan, women’s issues in Russia and aid for homeless children in Venezuela. Most of the JDC’s nonsectarian work to date, however, has been geared toward countries that suffered a disaster.

“We are not first responders,” the JDC’s executive vice president, Steven Schwager, told JTA. “We are like second responders, after the crisis, and we stay long term. We help rebuild and repair. We build schools.

Among the largest recipients of the JDC’s tsunami relief money is Dr. A.T. Ariyaratne, a Gandhi Peace Prize winner and a Nobel Prize nominee for his development work in more than 15,000 villages in his native Sri Lanka.

When the tsunami hit, the JDC reached out to Ariyaratne, whose Sarvodaya Shramadana movement is the largest nongovernmental organization in Sri Lanka, where 40,000 people were killed and another 2.5 million displaced by the disaster.

The JDC has been giving Sarvodaya $3 million per year to help with housing, water and sanitation, as well as psycho-social healing, in villages in the Ampara, Galle, Hambantota and Kalmunai districts.

Those “are a very tiny community in the world,” Ariyaratne told the IDP’s board of directors at the posh Helmsley Hotel Monday, speaking of the Sri Lankans he is trying to help. “The Jewish people are a very tiny people in the world. I thought that we could come together.”