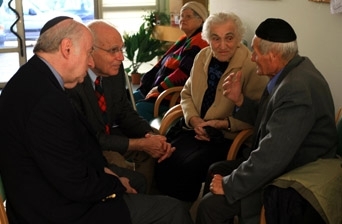 Claims Conference leaders Julius Berman, left, and Reuven Merhav meet with Holocaust survivors in Sderot on Dec. 12, 2007, the day at least 15 Kassam rockets struck the town on the Gaza border. (Courtesy of the Claims Conference)
Advertisement

NEW YORK (JTA)  – Leading Jewish organizations have ramped up efforts to defeat a congressional bill that would reopen the door to lawsuits against insurance companies that defaulted on policies sold to European Jews before World War II.

The Holocaust Insurance Accountability Act of 2007 would require insurance companies doing business in the United States to participate in a public registry of Holocaust-era policy holders and would pave the way for lawsuits by survivors who believe they are heirs to unpaid policies. The bill would effectively reopen claims that were supposed to have been settled earlier this year by the International Commission on Holocaust Era Insurance Claims, or ICHEIC.

In recent weeks, the Claims Conference, the American Gathering of Jewish Holocaust Survivors, the American Jewish Committee and B’nai Brith International have expressed concerns with the legislation to key members of congress, including U.S. Rep Barney Frank (D-Mass.).

“The major groups representing those survivors don’t think it’s the right legislation,” said Rabbi Andrew Baker, the AJC’s director of international Jewish affairs, who has met with several congressional staffers on the issue. “I think we would concur with them.”

The House Financial Services Committee, which Frank chairs, postponed a hearing on the bill scheduled for Dec. 11. Congressional sources say the committee will consider the legislation in January or February. Spokespersons for both U.S. Reps. Ileana Ros-Lehtinen (R-Fla.) and Robert Wexler (D-Fla.), both early supporters of the bill, told JTA they would continue to support it.

Opponents of the measure say the law could jeopardize future restitution negotiations because European companies and governments were promised legal peace in exchange for participation in the ICHEIC process. Germany’s ambassador to the United States made the same point in an October letter to the chairman of the House Foreign Affairs Committee, U.S. Rep. Tom Lantos (D-Calif.), expressing Germany’s opposition to the measure. The Foreign Affairs Committee approved the bill in October.

“It is absolutely true that the German government is very, very insistent that when we make a deal, we keep it with them, and they were very surprised and disappointed to see that an element of the Jewish community” wanted to renege on a deal “that had been worked out and arranged and agreed upon by everyone, including the State Department,” said the chairman of the Claims Conference, Julius Berman.

“They have come to us and said they feel very strongly on the issue. They have said that if they cannot make deals that we can keep, then it serves no purpose to sit with the Jewish community and negotiate,” he said. “And the State Department feels just as strongly.”

In a statement, the American Gathering said the bill would merely open up the insurance claims issue to class-action lawsuits that would benefit lawyers more than victims.

“While there are positive aspects to H.R. 1746, we believe it to be flawed in that it appears to be principally motivated by the avarice of lawyers, and in that it raises unrealistic expectations in the survivor community,” said the American Gathering, which represents some 80,000 survivors and family members.

Supporters of the bill say ICHEIC, which was established in 1998 to help heirs to unpaid claims recover monies from European insurers, was a failure. According to estimates included in the bill, insurance companies defaulted on between $17 billion and $200 billion worth of insurance policies.

ICHEIC and its defenders say those estimates are wildly exaggerated and consider the process a success for having allocated some $300 million to claimants, many of whom lacked sufficient documentation to substantiate their claims. The majority of those who did receive reparations received a nominal $1,000 payout because the insurance companies said they could not find adequate proof of their original policies.

Under the terms of the agreement negotiated by ICHEIC, survivors were prevented from suing the companies after the process ended. The bill would restore their rights to pursue legal action against the insurers.

“People got screwed massively and were always told they would have the right to go to court,” said Floriday attorney Samuel Dubbin, who represents survivors pushing for the bill.

Dubbin dismissed the notion that lawyers stand to be the main beneficiaries of the legislation, saying that all bills involving insurance companies include provisions allowing citizens to hire lawyers to represent them. He also said that the Claims Conference, of which the American Gathering is a member, was complicit in the failure of ICHEIC, as it was one of the primary administers of the program.

More than 20 activists claiming to represent survivors and their descendants sent a Nov. 26 letter backing the bill to Frank.

“That stance by these organizations not only hinders the justice that has been denied for decades to survivors and their families, but is morally outrageous,” they wrote. “Those organizations siding with the insurers’ and German Government’s chilling push to block the passage of HR 1746 puts them squarely in the path of survivors’ rights to fair compensation and, all too disturbingly, promotes the persecution visited on survivors because they were born the wrong religion.”