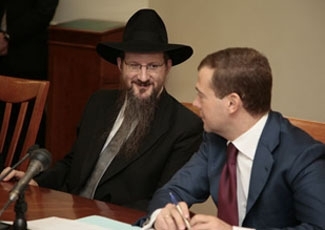 But the answer to the real question on everyone’s mind – how Putin will maintain control of the country after the presidential elections – came the next day when Medvedev returned the favor and announced that he will name Putin as prime minister following his anticipated electoral victory.

In an instant, the questions the Jewish community had been asking since Monday – about Medvedev’s relationship to Israel, his position on Iran and the potential influence of a Medvedev-controlled Kremlin – were overshadowed by questions about presidential succession in Russia.

Even before Medvedev’s announcement Tuesday, Jewish community leaders quietly were expressing concerns over the succession process. The announcement reinforced those concerns and cast a shadow over Medvedev’s anticipated presidency.

There is a sense of unease among Jews in Russia about politics in their country, as community members weigh the gains in Jewish life made under Putin against the climate of political fear the president has cultivated.

Reflecting this sentiment, community leaders declined to speak on the record to JTA about this week’s developments.

Privately, Jewish community leaders had predicted Putin would retain control despite the supposed ascension of a new president in March.

Whether to hedge their bets or not, some Jewish leaders paid homage Monday night to the man they heard would likely be Russia’s new leader.

The Russian chief rabbi of the Chabad-led Federation of Jewish Communities of Russia, Berel Lazar, who is close to Putin, told the Russian state news agency Interfax on Monday that it is not “a matter of religious figures to agitate for any candidate.”

Yet he was effusive in his praise for Medvedev, whom Lazar met only last week, when Medvedev made a Chanukah visit to a Chabad Jewish community center in Moscow.

“We have had more meetings with this statesman than with any other, except for President Putin,” Lazar said. “We can say that he has always been a clever and experienced interlocutor capable of reaching mutual understanding.”

In the light of Putin’s announcement Monday, the Dec. 5 visit by Medvedev to the Marina Roscha community center appears to have been a calculated message from the Kremlin to the Jewish community intended to reassure both the community at large and Lazar in particular.

Medvedev has been one of Putin’s closest political allies.

Born in then-Leningrad in 1965, Medvedev charted a course like many in Putin’s coterie. He studied law at Leningrad State University, where he completed his doctorate in 1990. Then, like Putin and other Kremlin insiders, he cut his political teeth working for Anatoly Sobchak, who became the first democratically elected mayor of Leningrad, now known as St. Petersburg.

But Medvedev differs from other members of the so-called Siloviki – those with power who surround the president – in one key aspect: Unlike Putin and his closest confidantes, Medvedev did not enter the state security services.

While the hawkish ex-defense minister Sergei Ivanov, previously considered Medvedev’s top competitor for the presidency, joined the KGB and its successor agency, the FSB, Medvedev risked his livelihood and freedom to fight one-party rule with Sobchak. Only later did Putin and others come around to Sobchak’s side.

The perception among analysts is that Medvedev’s experiences with Sobchak inform his positive view of the West as much as Putin’s KGB experience informed the realpolitik that seemed to guide his hand these last eight years in foreign and domestic policy.

Why Putin chose such a seemingly independent-minded president only to retain his grip on power was the subject of much speculation this week.

Despite Medvedev’s public persona as a young reformer, his and Putin’s reciprocal endorsements of each other are fueling the sense of ambivalence many Russians – particularly young Jews – expressed during the recent campaign for the lower house of parliament, the Duma.

Jewish community leaders and members say they don’t expect either the endorsement of Medvedev or the news of Putin’s future to have any direct impact on the community, since a Putin-Medvedev government likely would continue current policies.

Under the current government, anti-Semitism mostly has disappeared from the political arena, but groups like Hamas have been welcomed to Moscow for state visits.