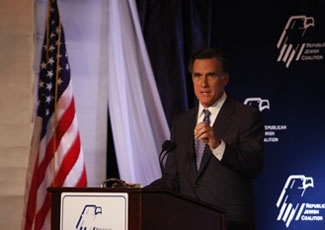 Mitt Romney, shown speaking at a Republican Jewish Coalition forum on Oct. 16, 2007, is among the presidential contenders who has talked about his faith on the campaign trail. (Courtesy of RJC)
Advertisement

WASHINGTON (JTA) – One presidential contender suggests he might be unwilling to vote for a Muslim. Another airs a commercial calling himself a “Christian leader.” A cable television anchor presses candidates to answer whether they “believe every word” of the Bible. And, finally, the Mormon in the race seeks to quell questions about his religion by insisting that Jesus is his savior.

Candidates in past election seasons have certainly talked up religion: In 2000, for example, Al Gore remarked that he often asked himself “What would Jesus do?” and George W. Bush named Jesus as the political philosopher who most influenced him. That’s not to mention Joseph Lieberman’s focus on his Jewish faith and insistence that the Constitution guarantees freedom of religion, not from religion.

But some observers are saying that the intersection of politics and piety in the 2008 presidential race seems more frequent, detailed and, often, exclusionary.

Some examples include Republicans John McCain commenting about being more comfortable having a president with a Judeo-Christian background, Mike Huckabee fusing his pastoral and political personas, and Mitt Romney defending his Mormon faith. Then there was CNN’s Anderson Cooper offering a Bible quiz.

Romney, the former Massachusetts governor, has seen his faith become an issue, helping to erode his early front-runner status in Iowa, especially among some evangelical Republicans who see Mormons as apostates.

On Dec. 6, in a speech at the George Bush presidential library in College Park, Texas, Romney said his Mormon faith would have no bearing on how he governs, but added that he believes that American public life acknowledges a “Creator.”

“We should acknowledge the Creator as did the Founders – in ceremony and word,” Romney said. “He should remain on our currency, in our pledge, in the teaching of our history, and during the holiday season, nativity scenes and menorahs should be welcome in our public places. Our greatness would not long endure without judges who respect the foundation of faith upon which our constitution rests.'”

Romney made a point of insisting that he believes “Jesus Christ is the Son of God and the Savior of mankind,” but ruled out further discussion about the specifics of his faith.

The national director of the Anti-Defamation League, Abraham Foxman, cited Romney’s speech as an example of how far the American political culture has internalized religious tests as a standard since John F. Kennedy delivered his famous speech during the 1960 campaign in which he addressed the potential of his becoming the first Roman Catholic president.

Rabbi David Saperstein, who directs the Reform movement’s Religious Action Center in Washington, praised Romney’s rejection of a religious standard for office as “a primer for electoral candidates to study in getting the use of religion in our elections right.”

Saperstein, however, noted an inherent contradiction in the speech: Romney affirmed his belief that Jesus is the son of God.

“If it were wrong to explain his Mormonism because candidates should not talk about their religion, then it was wrong to offer this assertion of faith, which served little purpose other than as a political ploy: to reassure observant Catholics and Protestants – most of all conservative Evangelical Protestants – that he shared their core belief,” Saperstein wrote on his blog.

Jewish Republicans said they were not worried about the religious rhetoric in this election cycle, noting that expressions of faith had also cropped up in the campaigns of Democratic candidates such as Barack Obama and Hillary Clinton.

“We’re not concerned,” said Suzanne Kurtz, a spokeswoman for the Republican Jewish Coalition. “They are expressing their views that faith is important in their lives as others from across the political aisle have done.”

That does not mean Jewish Republicans are letting their guard down, she said.

“What we do need to watch for is that candidates do not impose their personal views on others,” Kurtz said. “Religious tolerance and respecting the right of others to practice their faith as they see fit is what is important.”

During the RJC candidates’ forum in October, a delegate assured Romney that if there was one constituency who sympathized with his minority religion status it was Republican Jews. The delegate, Jonathan Lange of Los Angeles, drew long applause for his remark as well as Romney’s thanks.

Most troubling for some has been the campaign of Huckabee, the former Arkansas governor. In an ad that helped make him competitive with Romney in Iowa, Huckabee describes himself as a “Christian leader” – a title that ostensibly refers to his earlier career as a pastor but was viewed by some as a subtle swipe at Romney’s Mormonism.

“Forget the implications of the idea that being a ‘Christian leader’ is some special qualification for the presidency,” Charles Krauthammer, a conservative columnist wrote Friday in the Washington Post.

Had Huckabee run such an ad against Lieberman, Krauthammer said, “it would have raised an outcry. The subtext – who’s the Christian in this race? – would have been too obvious to ignore, the appeal to bigotry too clear.”

The National Jewish Democratic Council has seized on Huckabee’s surge in the polls, an acknowledgment that a Southern fundamentalist makes the group’s job of maintaining a Jewish Democratic majority a lot easier than perhaps Rudy Giuliani, the former New York mayor and a Catholic who refuses to make religion an issue in his campaign.

Democrats “should be concerned whenever an extreme candidate gets a whiff of the presidency,” the NJDC said this summer after Huckabee first surged in polls.

The organization also produced a cartoon portraying Huckabee as a caveman, in reference to a debate in which the Arkansan in response to a direct question said he did not believe in evolution.

Bud Hockenberg, an Iowa lawyer and Republican leader in the state, said it would be wrong for Jewish Republicans to view Huckabee strictly through a church-state lens. Huckabee also was making a strong foreign policy case, he said.

“He’s been focusing on the Saudi influence on foreign policy,” Hockenberg said.

In the Nov. 28 CNN-YouTube debate, Cooper asked Giuliani, Huckabee and Romney whether they believed every word of the Bible. Giuliani acknowledged that he did not; Huckabee said he did, as did Romney. Yet Cooper repeated the question only for Romney, holding the book aloft.

“Does that mean you believe every word?” Cooper said, although Romney had already answered, “Absolutely.”

Susan Estrich, a Jewish liberal pundit on Fox News and the director of the Dukakis presidential campaign in 1988, published a column this week that seemed to defend the focus on the candidates’ religious beliefs.

“Has there ever been a candidate who did not present himself, or herself, as a person of faith?” she wrote. “Would we have confidence in them if they didn’t? If they believed in a ‘religion’ that many of us found offensive, can we really claim that it would have no bearing on our support of them? The personal is political, and that applies to a person’s religion.”

Estrich went on to say, “it is because of my religion, in the end, that I think it is wrong to hold Mitt Romney’s against him.”

“It is not because religion has no place in politics, but because no message of the Judaeo-Christian tradition is stronger than the Golden Rule that I believe Gov. Romney should be judged based on his qualifications and not his faith,” Estrich concluded. “And when I see all those rabbis next week, that’s what I plan to tell them.”