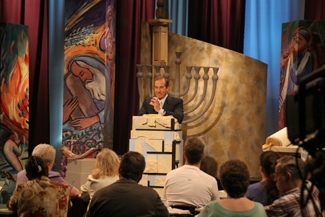 Rabbi Yechiel Eckstein, founder and president of the International Fellowship of Christians and Jews, speaks to a live audience during the filming of his educational television series "Journey to Zion" in August 2006. (Courtesy of IFCJ)
Advertisement

NEW YORK (JTA) – Thousands of evangelical Christian donors now have a powerful seat at the table of the Jewish Agency for Israel, the vanguard of the Zionist movement.

The Jewish Agency announced last week it has forged a “strategic partnership” with the International Fellowship of Christians and Jews, an organization that depends primarily on conservative Christian donors to raise tens of millions of dollars per year to help Israel and impoverished Jews in the Diaspora.
Under the new deal, the fellowship will supply the Jewish Agency with $15 million annually for the next three years to help cover its core budget, with most of the money going for immigration and absorption programs.

In exchange, the fellowship’s founder and president, Rabbi Yechiel Eckstein, will be given a seat on the Jewish Agency’s highest governing committee, its executive, which until now has been restricted to leaders of the World Zionist Organization, the United Jewish Communities of North America and its affiliated network of local Jewish charitable federations, and Keren Hayesod, the organization that raises money for the Jewish Agency from Jewish communities outside the United States. As part of the arrangement, he will also be able to appoint a member to the agency’s budget and finance committee and its committee charged with coordinating relations with the Israeli government.

The fellowship has been sending money to the Jewish Agency for about a decade, and Eckstein served on the agency’s board of governors for seven years and has had observer status on the executive for the past two. But, now, as a full-fledged voting member of the executive, he holds a top leadership position.
Eckstein’s new position can be seen as part of a major ongoing historical shift for the Jewish Agency, an organization historically owned and run by Jews throughout the world. Starting in the early 1920s, it served as the internationally recognized representative of the Jewish people and the de facto Jewish government in Palestine, and then after 1948 it became the jointly owned arm of Israel and Diaspora Jews in promoting immigration to the Jewish state.

With the new arrangement, control and ownership of the organization – and by extension the Zionist enterprise – is being shared to an unprecedented degree with representatives of non-Jews.
“This elevates” the fellowship and “thereby Christians around the world to strategic partner with the worldwide agency of the UJC and Keren Hayesod,” Eckstein told JTA. “The Jewish Agency is essentially saying that pro-Israel Christians are joining with the Jewish community worldwide in helping aliyah and in strengthening the security and welfare of the State of Israel. That has never happened before.”

The move comes at a time when the two top overseas recipients of funds from the North American Jewish federation system – the Jewish Agency and the American Jewish Joint Distribution Committee – are running budget deficits. The UJC requires that each federation give a predetermined percentage of its annual campaign to cover the basic operating and programming expenses of these two organizations. In addition, individual federations and the UJC raise money earmarked for specific projects.

With UJC officials telling both organizations to expect cuts in what it will be able to raise from federations for basic operations – the Jewish Agency is expecting a $2 million reduction next year – both the Jewish Agency and JDC are looking to other sources to help close the financial gap. As part of its effort to diversify its base of support, the Jewish Agency is in the final stages of implementing a strategic plan aimed in part at shedding its earlier image as inefficient.

The $15 million per year pledged by Eckstein’s group amounts to more than 10 percent of the $140 million that UJC raised from federations for the Jewish Agency’s core budget in 2007.

In total, the fellowship, which Eckstein started in 1983, has raised more than $250 million for Jewish causes in Israel. These days, it annually distributes more than $45 million to support Zionist causes and help needy Jews in the former Soviet Union, Israel and other countries.

In 2007, the fellowship gave $8 million to the Jewish Agency and $7 million to the JDC; the rest of the money went to other organizations, including Chabad, and to Israel advocacy and education programming aimed at Christians, including television programs. Eckstein anticipates the fellowship will bring in around $80 million in 2007, 18 percent of which will go to administration and fund raising.

The Jewish community has been split over whether it should embrace financial support, especially for Israel, from evangelical Christians – the fear being that some might be motivated at least in part by the belief that the Apocalypse and the return of Jesus can take place only once Jews move back to the Holy Land.

A spokesman for the fellowship, Michael Stoltz, described its relationship with UJC and the federations as “cordial.” But Eckstein told JTA that at times he has felt somewhat ostracized by the Jewish community, particularly by the federation system and the UJC.

During its early days, the fellowship gave money to the JUF-Jewish Federation of Metropolitan Chicago, but, Eckstein said, he was met with staunch skepticism from the wider federation system because his money came from evangelical Christians. So instead of going through federations and UJC, the fellowship has been giving directly to JDC and sending money to the Jewish Agency through Keren Hayesod. Eckstein said he was not sure if the new funding would go through Keren Hayesod or straight to the agency.

“When it didn’t work out through UJC, we started to work with and through Keren Hayesod,” Eckstein said. “They were very welcoming to me and to us and gave us a seat not only on the Kerent Hayesod board, but they gave me a seat on its board of governors.”

Still, Eckstein said, there has been a thaw in the relationship between the fellowship and the general Jewish community since the start of the second intifada in Israel. Getting onto the Jewish Agency executive, he said, is a final sign of validation.

Though some federations may have been wary of Eckstein and the fellowship at its outset, the UJC has had an amicable relationship with him, said Yitzchak Shavit, the UJC’s senior vice president of communal advancement, who oversees fund raising for foreign projects.

Eckstein “is part of the family, and we are kissing and hugging,” he said.

Ultimately, Eckstein just preferred to work on his own and not through UJC, Shavit said, adding that he’s happy Eckstein has been able to forge a successful relationship with the Jewish Agency.

Eckstein and agency officials denied reports that the deal quickly would lead to Christians filling some of the agency’s key lay positions, though Eckstein said he might choose to tap some of his members for Jewish Agency positions in three years, when the fellowship re-evaluates its relationship with the agency.

Agency officials rejected the notion that evangelicals would try to influence policy in an inappropriate way.

“This is a long relationship and has been a very positive one,” Carole Solomon, the chairwoman of the Jewish Agency in North America, told JTA. “We have never for one moment felt pressured to do anything that would run counter to our values or any of the Jewish people. The fact that the word Christian is in there is not a barrier to us.”

Eckstein also has been a voting member of the board of JDC since 2001, and has been a productive member of the organization’s lay leadership, JDC’s chief executive officer, Steve Schwager, said.

“On our board,” Schwager said, “he has been a passionate advocate on the needs of the people he gives money to: poor elderly Jews.”