Rudy’s Jews expected to back McCain 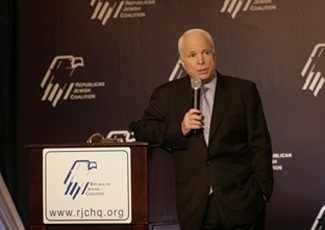 WASHINGTON (JTA) – Many of Rudy Giuliani’s Jewish backers are defecting along with the former New York mayor to the presidential campaign of U.S. Sen. John McCain, one McCain official said.

Fred Zeidman, McCain’s top fund-raiser, confirmed late Tuesday to JTA reports that Giuliani – who had enjoyed the strongest Jewish backing among the GOP candidates – would endorse the Arizona senator in California on Wednesday, before the Republican debate at the Ronald Reagan Library in Simi Valley.

Giuliani came in a distant third Tuesday in the Republican primary in Florida, the state he had hoped to win big. McCain won 36 percent of the vote followed by Mitt Romney, the former Massachusetts governor, with 31 percent. Giuliani trailed with 15 percent.

Zeidman, a top lawyer and lobbyist with offices in Washington, said that Giuliani’s fund-raisers, among them prominent Republican Jews, were coming over to the McCain campaign in droves.

“My phone and Blackberry were going off constantly” during a charitable fund-raiser Zeidman had organized Tuesday night in Houston, his hometown, Zeidman told JTA. He quoted one Jewish Giuliani backer as texting him: “I hate it when you’re right.”

Zeidman said it would be a natural transition for supporters of Giuliani to switch to McCain.

“It’s a trust issue,” he said. “One of the things people always liked about Rudy Giuliani is that he was going to tell you what was on his mind.” That was an implied dig at Romney, who has been painted by his Republican rivals as a poll-chasing flip-flopper.

Zeidman also said that Giuliani and McCain were similar in emphasizing a strong defense as the cornerstone of their foreign policy.

There are, however, subtle differences.

McCain has backed President Bush’s war in Iraq and his doctrine of pre-emption, but also says he believes in the brick-by-brick diplomacy of Brent Scowcroft and James Baker, stalwarts in the administration of Bush’s father who are anathema to neoconservatives and some pro-Israel groups for counseling pressure on Jerusalem.

Democrats also went to the polls Tuesday, although their votes may not count.

Last year, after Florida moved up its primary ahead of Feb. 5, the party announced that the state’s delegates would not be seated at the Democratic convention. U.S. Sen. Hillary Rodham Clinton (D-N.Y.) won Florida’s Democratic vote with about 50 percent.

Clinton started her victory speech Tuesday night in Davie, Fla., near Fort Lauderdale, by thanking an increasingly influential Jewish lawmaker, U.S. Rep. Debbie Wasserman Schultz (D-Fla.), and three other politicians who had campaigned on her behalf. She pledged to push for Florida’s delegates to be seated at the party’s nominating convention.

A survey conducted in November by the American Jewish Committee found that Clinton and Giuliani boasted by large margins the most favorable ratings among Jewish Democrats and Jewish Republicans.

Conceding Florida, Giuliani delivered the shtick that made him a breakout Republican among Jews, known to strongly favor Democrats: He was pugnacious. He invoked his immigrant roots. He pledged to fight terrorists. He pleaded for moderation.

The problem was, the former New York mayor was all but delivering his farewell speech, strongly hinting that he was ready to give up the race altogether.

“I don’t back down from a principled fight but there must always be a larger purpose,” Giuliani said in Orlando as supporters choked back tears. “Elections are about fighting for a cause larger than ourselves.”

A woman with a distinctive New York accent called out: “They’re gonna be sorry!”

Giuliani laughed and blew her a kiss.

Giuliani’s speech was a rehash of the themes that informed his campaign: maintain America’s offensive posture in the war against Islamic extremism, reach out to moderates and embrace Americans of all origins.

The trouble is, while endearing him to Jews and neoconservatives, the appeals appeared to be a non-starter among the conservatives that comprise the Republican base.

That was to the party’s peril, Giuliani suggested.

“We must be a 50-state Republican Party,” competing for “urban, suburban, conservatives, moderates, all racial and ethnic groups,” he said.

Like many of the Jews who surrounded his campaign and were among his closest advisers, Giuliani is the grandson of immigrants – a biographical detail he invoked Tuesday night, saying his grandparents wouldn’t have imagined that ” their grandson would have run for president of the United States.”

On foreign policy he sounded the themes that drew neoconservative heavyweights to his campaign, including Daniel Pipes, Michael Rubin, David Frum, Norman Podhoretz and Martin Kramer.

“America needs to stay on offense to win the terrorist war on us,” Giuliani said. “The best way to achieve peace is through overwhelming strength.”

And above all, he recalled his posture as the hero of the Sept. 11 2001 terrorist attacks, the man whose constant presence at Ground Zero had reassured Americans, “helping to heal the wounds left by the deadliest terrorist attack in American history,” he said.

Giuliani dedicated his campaign to the memory of first responders who died that day.

Memories of those days helped garner him the lead in polls ahead of the primaries, but he was unable to sustain it – unable to pivot, pundits said, to the more textured realities of a national campaign and to address, for instance, the public’s switch in recent weeks from concerns about the Iraq war to economic insecurity at home.

Giuliani campaigned hard in New Hampshire, but when he performed poorly in that bellwether state, coming in fourth, he shifted the narrative and insisted that taking Florida was his goal all along.

Giuliani, harping away at the threat of terrorism, was unable to change quickly enough – and it didn’t help that he appeared in his dark suit at his campaign appearances, delivered the same bromides, brooked few questions and hardly shook hands.

“He’s also not the warmest, cuddliest candidate in the world, as we know here in New York,” Brokaw said, recalling Giuliani’s take-no-prisoners style as the city’s chief executive.

Giuliani’s predecessor as mayor, Ed Koch, who has reviled Giuliani’s autocratic style, was blunter: “The beast is dead,” he told ABC.

Also not helping Giuliani was his association with the scandal-tarred Bernard Kerik, his former police commissioner, and his extravagantly public marital breakups – he is on his third marriage, to a woman he courted while married to wife No. 2.

Still, the idea of Giuliani as “America’s mayor” resonates beyond his supporters.

McCain, claiming victory, thanked his rivals but earned the biggest cheers when he mentioned Giuliani, saying the former mayor “conducted himself with all of the qualities of the exceptional American leader he truly is.”