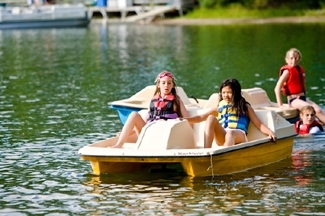 Children at Jewish summer camp enjoy a day out on the lake. (Courtesy of the Foundation for Jewish Camping)
Advertisement

The Jim Joseph Foundation has allocated $8.4 million to the Foundation for Jewish Camping to start the Specialty Camp Incubator, which will develop and launch four camps. The camps will combine a Jewish curriculum with a specific concentration in a skill area such as sports, computer science or the arts.

Leaders of both foundations say they are attempting to tap into a market, specialty camps, with few Jewish-themed options by using a business model that has been widely adopted by the philanthropic world in the past several years.

“We are looking to increase the market share of Jews not going to Jewish camps but going to specialty camps because there is no Jewish alternative,” said Jerry Silverman, the executive director of the camping foundation. “Nike has about 60,000 kids going to basketball camp, and computer technical camps have about 12,000 kids, but there are only a couple of” specialty camps operated under Jewish auspices.

The camping foundation will use the Jim Joseph gift to provide seed money and mentoring services for not-for-profit camps, with the aim of helping them become viable and financially self sufficient within the next several years.

The foundations are specifically looking for camps to run on existing sites, such as college campuses and boarding schools, to minimize costs. Starting a camp can run about $25 million, including capital costs, while a camp that uses an existing facility can be started for closer to $1.4 million, Silverman said.

The camping foundation will start taking proposals for prospective camps in the next month; those with innovative ideas are welcome to apply, Silverman said.

The Jim Joseph Foundation is trying to seize on the results of recent studies showing that Jewish camps provide one of the Jewish community’s most effective methods for engaging young Jews.

“Our vision is to see an increasing number of Jews involved in Jewish learning and living Jewish lives, and you don’t have to do the research to see the effect of camping on Jews,” the executive director of the Jim Joseph Foundation, Chip Edelsberg, told JTA. “It is clear that they tend to opt into Jewish life. That, along with six to 10 years of Jewish day schools and Israel immersion, is one of the reliable indicators of people choosing Jewish lives.”

The project to start new camps is a shift from the camping foundation’s strategy, which until now has been focused on doubling the number of children who attend existing Jewish camps to 150,000 over the next decade. This is the foundation’s first effort to build new camps.

Silverman estimates that the four new camps will serve 275 children each once they are running and up to 2,200 over the next five years.

The foundations join a growing list of Jewish organizations and foundations starting incubator programs that help seed and grow new, innovative Jewish projects. Originally a model used in the business world, the incubator model has been embraced by Jewish philanthropies in recent years:

* Bikkurim, a joint initiative of the Jewish Educational Services of North America and the United Jewish Communities, has helped found 21 new Jewish organizations;

* Six Points Fellowship, a project backed by several organizations, including the UJA-Federation of New York, the Foundation for Jewish Culture and JDub Records, is helping to groom a new generation of Jewish artists;

* The Andrea and Charles Bronfman Family Philanthropies is offering a two-year visiting professorship at Brandeis University and a book deal to someone with the “next big idea in Judaism”;

* The Harold Grinspoon Foundation recently awarded a $200,000 incubator grant to Rabbi Ethan Tucker to help him grow projects to engage Jews from different streams of Judaism.

The Jim Joseph gift is the second significant allocation made by the $900 million San Francisco-based foundation to the camping foundation since it started making grants last year.

Leaders of the Jim Joseph foundation estimate that eventually it will give more than $25 million per year to Jewish causes. Last year it gave $11.2 million to the camping foundation, to be spent over the next four years, to provide significant stipends to first-time campers between the ages of 11 and 13 at Jewish camps on the West Coast.

The specialty camps incubator idea was in the works for six months, according to Edelsberg, who worked closely with his board and the camping foundation board to put it in motion.

“Our directors pushed them and said, ‘What are your big ideas, and what will it take in order to incentivize you to work with them?’ ” Edelsberg said.