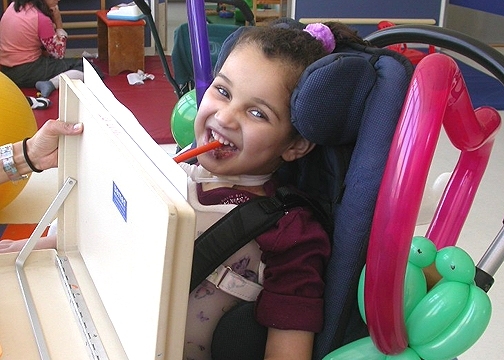 JERUSALEM (JTA) – Maria Amin barrels down the corridors of the hospital in a wheelchair she maneuvers by using a joystick she moves with her chin.

Like many children her age, the 6-year-old watches cartoons and loves puzzles, and she talks animatedly with her aunts and uncles in the Gaza Strip using a Web camera and an Internet connection.

Maria has problems speaking, but says she wants to be a lawyer.

For two years, the Palestinian girl from Gaza has spent her days at an Israeli rehabilitation hospital here after being paralyzed from the neck down by an Israeli airstrike.

The target of the May 2006 strike – Islamic Jihad militant Mohammad Dahdouh, who was responsible for rocket attacks on southern Israeli towns – was killed by a missile, but so were Maria’s mother, older brother and grandmother, who were traveling in her uncle’s car just behind Dahdouh.

Maria was thrown from the vehicle and now needs a respirator to breathe. Her father and doctors at the Alyn Pediatric and Adolescent Rehabilitation Hospital attend to her 24 hours a day.

Israel’s Defense Ministry sparked a firestorm last year when it suggested transferring Maria to Ramallah, eastern Jerusalem or another Arab locale. Ministry officials said those sites would suit her better than a hospital in Jewish Jerusalem.

The ministry pays for Maria’s treatment and education, as well as living expenses for her father and brother.

Public criticism curtailed that plan, and the government agreed it would pay for Maria’s treatment at least until the end of this year.

“Israel assumes its responsibility in this case and only wants what is best for the child,” Defense Ministry spokesman Shlomo Dror told JTA.

Maria’s father, Hamdi, wants to keep his child in Israeli hands. He says Palestinian hospitals are not equipped to care for his daughter and that transferring her from Alyn hospital would pose an unacceptable risk to her life.

“What’s most important is that my daughter gets the care she deserves,” Hamdi said. “I hope that we can stay in Israel. We have met wonderful people here. Jewish people visit us; army officers visit.”

Hamdi, who is represented by Israeli attorney Adi Lustigman, is demanding that the Defense Ministry put its commitment to Maria’s care in writing before he consents to move her. The ministry has refused, and a hearing in the matter is scheduled for July.

Lustigman says Israeli checkpoints and chaos in Palestinian areas would make it impossible to get Maria to an Israeli hospital quickly in case of an emergency. Transferring her would be a “death sentence,” she says.

Dror says the decision to pay for her care is humanitarian and does not constitute an Israeli policy to compensate Palestinian civilians injured in Israeli operations; Israel does not compensate the victims of “acts of war.”

He says the ministry suggested Maria’s transfer only after her rehabilitative therapy had concluded.

Maria is among tens of thousands of Palestinians who receive care every year at Israeli hospitals.

In 2007, Israel issued more than 63,000 permits to Palestinians requiring treatment in Israeli hospitals, according to the army unit responsible for civilian matters in the West Bank and Gaza, the Coordinator of Government Activities in the Territories.

Most Palestinians either pay for their care privately, or have the Palestinian Authority or private foundations such as the Peres Center for Peace handle the expense. The Peres Center’s Saving the Children project has financed treatment in Israel for more than 5,000 Palestinian children since 2003.

But Maria’s case is exceptional in that the Israeli government is footing the bill.

Far from the legal wrangling, every weekday at 6 a.m. Hamdi dresses and feeds his daughter in her hospital room.

“I know what my daughter needs better than the doctors,” Hamdi says as he adjusts Maria’s wheelchair.

Before Maria was hospitalized, Hamdi worked as a construction worker. Now he lives downstairs in a small apartment at the hospital with Maria’s younger brother, Moman.

In the afternoons Maria, a first-grader, attends a bilingual Hebrew-Arabic school for Jewish and Arab children in Jerusalem’s Katamonim neighborhood. She already has picked up Hebrew in addition to her native Arabic, impressing teachers with her lively spirit.

Hamdi says he doesn’t dwell on the cause of his daughter’s injuries.

“We don’t even think about being angry at those who did this to Maria,” he says. “I am a Muslim. I believe that God gives and God takes away.”