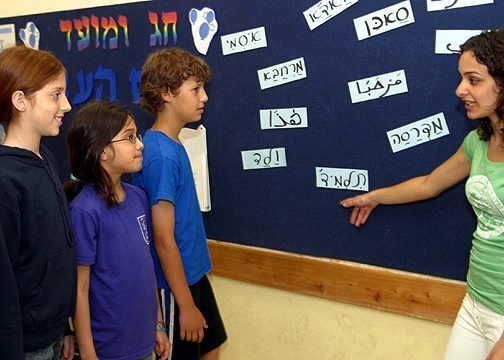 Jewish Israeli children learn conversational Arabic, which is seen as an important step toward “building a culture of coexistence and equality” among Jewish and Arab Israelis. (Courtesy Abraham Fund)
Advertisement

NEW YORK (JTA) – A quiet change is taking place in northern Israel among Jews and Arabs.

Jewish and Arab municipal officials who only a few years ago resisted being in the same room together now are working on collaborative solutions to transportation problems, environmental cleanup, tourism development and job creation.

In cities and regions throughout Israel, thousands of young Jews are studying conversational Arabic language and culture, getting to know their Arab neighbors and finding common ground.

In 1948, the founders of the state declared that Israel will “foster the development of the country for the benefit of all its inhabitants; it will be based on freedom, justice and peace; it will ensure complete equality of social and political rights to all its inhabitants irrespective of religion, race or sex.”

But 60 years after these words were proclaimed in Israel’s Delaration of Independence, the promise of full social and political equality is still elusive for Israel’s 1.4 million Arab citizens.

One in five Israelis is an Arab. Arab citizens of Israel face dramatically higher unemployment and poverty rates than their Jewish counterparts. They are underrepresented in civil service and receive a grossly unequal share of government allocations and services.

While comprising 20 percent of Israel’s population, Arabs are only 5 percent of Israeli college graduates, and many find themselves underemployed and shut out of jobs in the knowledge economy for which they were trained.

Despite Israel’s economic boom, these gaps are growing.

Equally disturbing is the rise of intolerance and mistrust on both sides of the ethnic divide. According to polling data provided by the Association for Civil Rights in Israel, 75 percent of Israeli Jews oppose sharing a residential building with Arabs and feel uncomfortable hearing Arabic spoken; 56 percent support Arab-Jewish separation in places of entertainment; 42 percent are prepared to limit Arab voting rights; and only 22 percent support including Arab parties in governing coalitions.

On the Arab side, the picture is no less concerning. Only 33 percent of Arab citizens believe Israel is a democracy; 62 percent believe Israel cannot be both Jewish and democratic; and 94 percent view Zionism as a racist movement, according to the Arab Center for Applied Social Research, Mada-al-Carmel.

Such trends of polarization and demonization of the “other” are detrimental to the creation of a democratic and egalitarian state of Israel.

The American Jewish community, which for decades has been engaged in building a national home for the Jewish people, has failed to take into account that both ideology and philanthropy have left Israel’s indigenous Arab minority far behind.

Until recently, few Diaspora Jews – single-mindedly focused on the building and survival of the Jewish state – recognized the importance of strengthening Jewish-Arab cooperation, narrowing the socioeconomic chasm between the two communities and developing a sustainable framework for majority-minority relations in Israel.

But just as developing the Negev and the Galilee, constructing hospitals and universities, and absorbing waves of Jewish immigrants were top priorities for Israel during its first 60 years, so too must the creation of a just and inclusive society be a top priority for the decades ahead.

Promoting social and political inclusion and civic equality, raising the standard of living and providing a fair share of public services to Israel’s Arab citizens is both morally just and absolutely critical for insuring a secure and sustainable Israel.

Such a society must reject a faltering educational system and declining academic achievement seen most acutely within Arab schools, shortages of social services and few programs for Arab youth at risk, and employment practices that prevent Arab workers from realizing their potential.

Israeli society must address the crushing pressure on Arab municipalities to provide basic infrastructure needs for their communities. Israel also must address issues of land allocation and planning – most pressing within the Negev Bedouin communities – and the longstanding exclusion of Arab citizens from meaningful participation in Israel’s governing processes.

This is a time of great urgency and opportunity for Israel and for the future of Jewish-Arab relations. For those committed to coexistence and equality, the vision of a safe and just Israel remains clear and focused: an inclusive Israel in which all its citizens – Jews and Arabs – benefit equally from and contribute together to the development of Israeli society, economy and culture.

Learning to live with our next-door neighbor is a precondition for learning to live with our neighbors across the border. Investing in building a culture of coexistence and equality among Israel’s Jewish and Arab citizens is an investment in Israel’s future. We invite Jewish and Arab Israelis, and friends abroad, to join us in this critical undertaking.

(Ami Nahshon is the president and CEO of The Abraham Fund Initiatives. Mohammad Darawshe is the co-director of The Abraham Fund-Israel, a nonprofit organization working for an inclusive and just society for all Israelis, Jewish and Arab.)