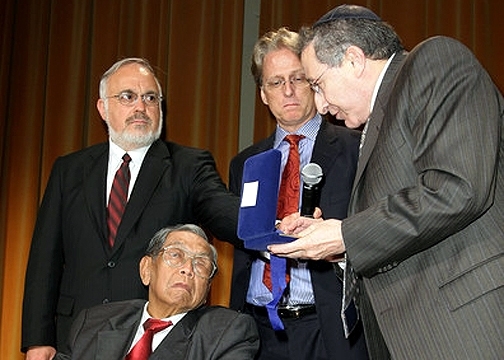 WASHINGTON (JTA) – In its telling, the story of a notorious lynching of Jews is not unusual.

The storyteller, however, is: Abdurrahman Wahid, the former Indonesian president, and a leading Muslim scholar.

In an interview with JTA, Wahid, who traveled to the United States and then Israel in recent weeks to preach his message of Muslim tolerance, revealed the root of his understanding of the risks and perils of Jewish existence.

Wahid was a 29-year-old student at Baghdad University in 1966, earning his keep as a secretary at a textile importer, when he befriended the firm’s elderly accountant, an Iraqi Jew he remembers only by his family name, Ramin.

“I learned from him about the Kabbalah, the Talmud, everything about Judaism,” Wahid recalled of the four-year friendship that included long lunches, quiet walks and talks at the city’s legendary Hanging Gardens.

Wahid has spoken about this friendship before – it is featured in his biography by Greg Barton, “Abdurrahman Wahid: Muslim Democrat, Indonesian President” – but on this recent tour Wahid added to the account his memories of Jan. 27, 1969.

In 1968, the Iraqi government effectively had come under the control of Saddam Hussein, whose title at that time was deputy to the president, Ahmad Hassan al-Bakr.

At Saddam’s behest, Iraqi courts had convicted 14 Iraqis – nine of them Jews – on trumped-up charges of spying for Israel, and they were hanged that day in Baghdad’s Tahrir Square, just steps away from where the textile firm had offices.

Ramin came to his friend Wahid and wept, wondering what would become of Iraq’s ancient Jewish community.

“I said, ‘This is not only your fate, it is my fate,’ ” said Wahid, now frail and in a wheelchair.

Wahid said he decided then that “the Islamic people should learn” about the Jews and their faith.

Ramin’s worst fears were realized: The community that dated to the Babylonian exile heard Saddam’s message loud and clear, and by the early 1970s it had dwindled to barely a hundred Jews. By 2007 there were less than 10, according to media accounts.

Wahid, however, made good on his pledge.

Best known as the president who shifted Indonesia to democracy from 1999 to 2001, Wahid then was forced out due to a combination of financial scandals and hard-liners who opposed his attempts to liberalize restrictions on political groups and the country’s Chinese minority.

Wahid also has gained prominence for his insistence on introducing the world’s most populous Muslim nations to certain truths about the Jews.

As an opposition leader, he broke new ground by visiting Israel in 1994. The apex of this effort, conducted jointly with the LibForAll Foundation, a group that promotes moderate Islam, and the Simon Wiesenthal Center, was the Holocaust conference last year in Bali, Indonesia.

At the conference, which was attended by survivors and Jewish and Muslim clergy, Wahid called Iranian President Mahmoud Ahmadinejad a “liar” for denying the Holocaust.

Wahid, 67, continues to promote his message with LibForAll, founded in 2003 by C. Holland Taylor, a scholar of Southeast Asia and a telecommunications magnate. Wahid, who says he plans to run for president again in 2009, brings to the venture his prestige as the scion of a family of Javanese Islamic scholars.

Earlier this month he attended a Wiesenthal Center tribute dinner in his honor and then traveled to Israel to participate in Israeli President Shimon Peres’ conference celebrating Israel’s 60th anniversary, “Facing Tomorrow.”

This Jewish component is just part of Wahid’s larger effort to promote an ideology of moderate Islam. He wants to demonstrate that the radical factions are not pre-eminent and to promote a faith that preaches equality for women and tolerance of non-believers.

Taylor says the strategy is to reach political, religious and cultural leaders – even pop stars – and through them to “trickle down” the message of Wahid’s moderate Islam.

“We work with top leaders,” Taylor said. “These individuals are able to drip their message down to a grass-roots levels.”

The organization also is disseminating a 30-lesson video curriculum called “What is Islam” that advances a pluralistic vision of the faith throughout thousands of Islamic boarding schools in Indonesia.

One of the project’s highest-profile coups was getting rock star Ahmad Dani, whose group, Dewa, has been likened to U2, on board with the program. Dani has recorded a single taking on Laskar Jihad, Indonesia’s radical Islamist terrorist group. The song is called Laskar Cinta – “Warriors for Love.”

Taylor says plans are under way to translate the videos and tracts into Arabic and other languages.

“We feel that Indonesia has the cultural capital to be a leader in the struggle,” he said.

This strategy might make headway in countries where moderate Islam has roots – Malaysia, Turkey and some East African nations – but Taylor does not have a clear plan of action for how this strategy is supposed to work in places such as Saudi Arabia, which has few Islamic moderates.

“Don’t give any kind of recognition to the fundamentalist view of Islam,” Wahid said. “The Saudis have a double-pronged thing: the first is to give assistance to fundamentalists, on the other side to show the ‘humanist’ side of Islam. These things cannot be reconciled.”