JDC official on the ground in Myanmar 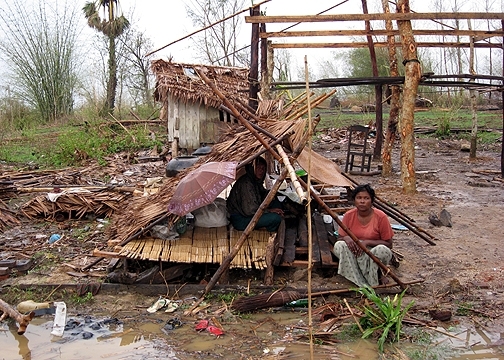 NEW YORK (JTA) – Amos Avgar won’t talk about the signs of death he saw in Myanmar in the days immediately following Cyclone Nargis.

“The death is apparent,” the bespectacled and graying Avgar told JTA in the offices of the American Jewish Joint Distribution Committee last week, the day after returning from a weeklong fact-finding mission to the country. “There is evidence of bodies, but I am not going to talk about it.”

Avgar, the executive director of the JDC’s nonsectarian arm, the International Development Program, was one of the first aid workers employed by an American nongovernmental organization to be allowed into Myanmar after the cyclone wreaked its hell May 3.

Tens of thousands have died and 1.5 million Burmese are without food and shelter.

The military junta that has ruled the country since 1962 has been loath to allow in Americans, fearful of Western influence on the Burmese. But Avgar entered on an Israeli visa with W.H.W. Soysa, a Buddhist native of Sri Lanka who became the point person for the JDC’s efforts there in the aftermath of the tsunami that hit the Indian Ocean coastal region two years ago.

For political reasons, there is much about his journey and dealings with the government in Myanmar that Avgar won’t discuss on the record. Like most aid workers, he is afraid that any misstep with the media, any statement too critical of the junta, will lead the country to ban him or his organization from continuing its work there.

Avgar had been to Myanmar twice before on pleasure trips – once following Israel’s 1967 war, when he trekked through the country with his brother, and again recently with his son. It has become a popular tourist destination for Israelis backpacking after they finish their army service.

“The people are the most hospitable, friendly, happy people,” the 61-year-old said in a thick Israeli accent. “It’s a relatively poor country, especially in the south. They live in small shacks and villages. There are monasteries everywhere, and the last time I visited, I went up to the north. It is gorgeous country, very Buddhist, very religious, very friendly.”

But the country he saw earlier this month was much different.

Avgar arrived in the capital city, Yangon, on the night of May 8. With the supply of electricity low after the storm, the country was pitch black. He compared the darkness to blackouts in Israel when the country invaded the Sinai in 1956.

There was silence, too, as the junta does not allow foreign cell phone service.

“When you come to Yangon, the first impression is it is a tree-full country. There are huge, beautiful trees, hundreds of years old,” he recalled of the Yangon he knew. “Because of the cyclone, now a high percentage of the most beautiful hundred-year-old trees fell over, and you see huge trunks lying on the streets. All of the electricity lines are broken. The houses, the roofs are blown off.”

But Avgar saw the greatest devastation on a trip down the Irrwaddy Delta from Yangon to Laputa, the region hardest hit by the cyclone. He and his entourage – Soysa, a local doctor to act as the JDC’s liaison in Myanmar and a guide – took the “scenic route.”

“It is miles and miles of marshland, rivers and small creeks, a lot of water, a lot of rice patties,” Avgar said. “The population is extremely, extremely dispersed – a shack here and a shack there. The houses are made of bamboo and the roofs made of different kinds of leaves or bananas.

“There is no electricity and no infrastructure, and the closer you got to the south of the delta, to Yaputa, the devastation became more apparent in terms of huts blown off.”

Avgar said the most basic need is drinking water.

Before the cyclone, Avgar said, quite a few international NGOs worked in the country. But since Negris, foreigners have not been allowed to travel to the most affected areas in south Myanmar.

Avgar said the people he met were in shock. They were unaware the storm was coming.

“It just came and blew up everything,” he said of the cyclone. “The water came and flooded everything.”

JDC is discussing how to create an early-warning system to notify those in the delta of future storms.

Most of the dead were drowned, swept away by the swollen river. Flying debris killed the others.

Avgar, who was also JDC’s point man in Sri Lanka after the tsunami and in Pakistan when an earthquake killed 75,000 in 2005, said that in terms of scope area affected, the devastation in Myanmar “is huge.”

But the Burmese Avgar met seemed resilient and ready to rebuild. “Dignified,” he said.

In Yangon, young people have mobilized, sawing fallen trees. In the delta, they are trying to help rebuild, too. Avgar said it is difficult because the land is isolated and had little infrastructure.

Charity dollars from the West have been slow in coming. While Americans generated nearly $2 billion in aid for the tsunami, according to a report released Monday by the Center on Philanthropy at Indiana University, they had donated only $12.1 million in aid for Myanmar, where 130,000 people are either missing or dead.

Part of it, says a report by the Associated Press, is sheer “disaster fatigue,” as people simply cannot conceptualize the needs based on the cyclone followed directly by the earthquake in China that has killed more than 34,000.

For the Jewish nonprofits involved in relief efforts in both countries, trying to heal two massive natural wounds has been a strain, but choosing is impossible.

“The human beings involved in disasters all over the world have equal values,” said Joel Kaplan, the chair of the disaster relief program at B’nai B’rith International, which has sent $20,000 to Israid: The Israel Forum for International Humanitarian Aid for relief in both countries. “We were never faced with choosing one over the other.”

For JDC, which has opened mailboxes to raise money for both disasters, Myanmar has been the focus because the organization can do more in Myanmar than it can in China.

“If you have two brothers and both are suffering, who do you give the money to?” asked July Amit, JDC’s chief operating officer.

The organization has received $500,000 in pledges and donations for Myanmar, she said. Avgar hopes to raise a total of $1 million.

But he knows that for dollars to start pouring in, the face of the death in Myanmar will have to emerge through pictures and media reports that thus far have been stifled by the military junta.

“I object to that phenomenon. I agree that it is the case. People like to have that,” he said of the voyeuristic aspect of disaster philanthropy.

“But I think people should be more drawn to the miseries of the people who are left homeless and orphans and the really helpless. Because like Soysa said to me, with the Buddhist approach, there is nothing that the dead can do. What we need to think now is to emphasize the development, to help people get on their feet, so that such an occurrence will not happen again. The dead need to be buried.”