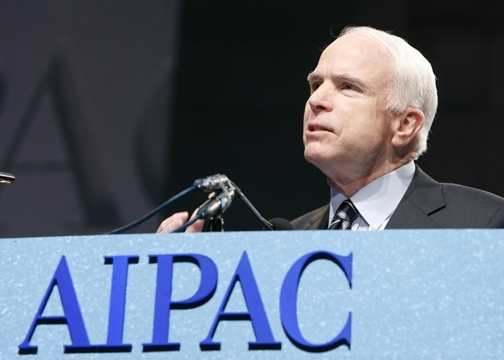 WASHINGTON (JTA) – No confessional bloc rejects the Iraq war more than American Jews do. But in a bit of political jiu jitsu, John McCain is making the policy his own in his plea for Jewish votes.

The presumptive Republican presidential nominee made headlines – and drew heavy fire from Democrats – for launching this year’s American Israel Public Affairs Committee conference on Monday with an attack on Barack Obama’s Iran policy.

But more remarkable was how Sen. McCain (R-Ariz.) chose to close his speech: Defending his commitment to an unpopular war by casting it as important for Israel’s safety.

“Another matter of great importance to the security of both America and Israel is Iraq,” he said. “You would never know from listening to those who are still caught up in angry arguments over yesterday’s options, but our troops in Iraq have made hard-won progress under Gen. Petraeus’s new strategy.”

McCain was referring to the troop escalation that he advocated a year ago, and that was carried out under the command of David Petraeus, the top U.S. commander in Iraq.

“It’s worth recalling that America’s progress in Iraq is the direct result of the new strategy that Sen. Obama vehemently opposed,” McCain continued. “Allowing a potential terrorist sanctuary would profoundly affect the security of the United States, Israel and our other friends, and would invite further intervention from Iraq’s neighbors, including a very much emboldened Iran. We must not let this happen.”

The line earned applause at the AIPAC policy conference – the lobby’s membership skews more hawkish on foreign policy than the wider Jewish voting public – but how it will play with the broader American Jewish public remains to be seen.

Jews and black Protestants oppose the war in greater numbers than any other religious group – more than 70 percent, according to some polls. That and McCain’s commitment to conservative social mores – particularly his anti-abortion positions and stated admiration for recent GOP judicial nominations – would apparently make him a difficult sell to American Jews.

But recent polling has shown McCain – in a race against Obama, the likely Democratic presidential candidate – faring much better among Jews than any Republican candidate has since Ronald Reagan. In a Gallup poll of Jewish voters last month, McCain garnered 32 percent again Obama’s 61 percent, substantially better for the Republican candidate than the 24-75 break President Bush earned in 2004.

McCain’s backers credit a “straight talk” strategy, which would explain McCain’s tack Monday at the AIPAC conference: Voters favor a candidate who says what he means even when they don’t agree with him, the backers say.

“What is most strikingly different from other candidates is that he is strongly principled and an independent thinker,” Lew Eisenberg, a McCain campaign national finance co-chairman, told JTA. He cited McCain’s backing for the surge a year ago and his backing for an unpopular immigration reform bill around the same time.

Democrats are not allowing McCain’s “straight talk” reputation to go unchallenged. In his AIPAC speech, McCain targeted Obama’s signature foreign policy distinction, his willingness to directly engage with the leaders of pariah nations, including Iran.

“The Iranians have spent years working toward a nuclear program, and the idea that they now seek nuclear weapons because we refuse to engage in presidential-level talks is a serious misreading of history,” he said.

That sparked a long detailed reply from the Obama campaign outlining the Illinois senator’s advocacy of tough Iran sanctions bills and resolutions. The statement also continued a Democratic policy of associating McCain with Bush, the most unpopular president in polling histoty.

“John McCain stubbornly insists on continuing a dangerous and failed foreign policy that has clearly made the United States and Israel less secure,” the Obama statement said. “Here are the results of the policies that John McCain has supported, and would continue. During the Bush administration, Iran has dramatically expanded its nuclear program, going from zero centrifuges to more than 3000 centrifuges.

“During the Bush Administration, Iran has expanded its influence throughout a vitally important region, plying Hamas and Hezbollah with money and arms. During the Bush Administration, Hamas took over Gaza. Most importantly, the war in Iraq that John McCain supported and promises to continue indefinitely has done more to dramatically strengthen and embolden Iran than anything in a generation.”

McCain’s campaign will not let the Bush linkage go unchallenged, and is working hard to distance the candidate from the president, particularly in its appeal to Jewish voters, a senior adviser told JTA.

McCain “said in 2003 that unless we change things we’re going to be in real trouble, he argued for a change in strategy, a counterinsurgency, the troops that were needed,” the aide said.

In a recent interview with Jeffrey Goldberg of the Atlantic, McCain displayed a willingness to chart his own course, even while echoing much of Bush’s thinking on Iran and Iraq. In particuar, he signaled a commitment to playing a more active personal role in israeli-Palestinian negotiations.

“I would have a hands-on approach,” McCain said in the interview, in sharp contrast to the current president’s much-noted reluctance to play such a role. “I would be the chief negotiator. I have been there for 30 years. I know the leaders, I know them extremely well. Ehud Barak and I have gone back thirty years. I knew Olmert when he was mayor of Jerusalem. I’ve met many times with Netanyahu. I’ve met with Mahmoud Abbas.”

Another tack for appealing to Jewish voters, McCain backers say, is to argue that although McCain backs conservative policies, he thinks for himself – an approach that they hope will go some way toward assuaging concerns of Jews who are concerned about the conservative shift in the U.S. Supreme Court.

McCain has stated his admiration for Bush’s judicial picks, but also drew the ire of conservatives several years ago, when he spearheaded the so-called Group of 14; the collection of seven Democratic and seven Republican senators who reached a deal that successfully headed off a partisan meltdown in the chamber and effectively paved the way for Democrats to block several of Bush’s most controversial judicial nominees, while permitting the appointment of dozens more.

It’s a consideration that helped shift the vote for Karen Zeiger of San Diego, a reproductive rights activist who had backed Obama’s rival, Sen. Hillary Rodham Clinton (D-N.Y.) in the primaries. She was now considering McCaiin, despite the prospects of a Supreme Court that might overturn Roe v. Wade, the seminal abortion rights decision.

“With the court, you can take chances,” said Zeiger, who was attending the AIPAC conference. “With Israel you have one chance.”