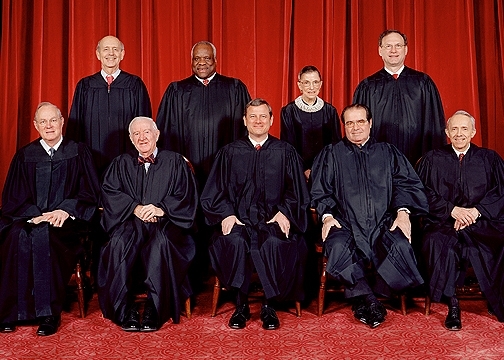 Jewish court watchers agree that this Supreme Court session was not as damaging as the last to issues that concern Jewish civil rights groups. (Courtesy Supreme Court of the United States)
Advertisement

In its 2007-08 session, which ended last week, the majority conservative court turned away a number of church-state cases where its decisions might have had a long-lasting impact in areas of traditional concern to Jews.

“The less church-state cases the Supreme Court takes, the better off we are,” said Jeff Sinensky, the counsel for the American Jewish Committee.

Otherwise it was a mixed bag, court watchers said, with an encouraging victory on the right of prisoners to request court review and a major defeat on gun control.

Most major Jewish organizations favor the liberal view in cases that come before the court, although Orthodox groups often join with conservative groups on some issues, particularly in the church-state area.

The narrow 5-4 votes in the decisions on prisoners and guns underscored a longer-term concern for most Jewish groups: Members of the court’s aging liberal minority are likelier than the more youthful conservative bloc to leave during the next president’s term.

On the right of detainees to demand judicial review – the principle of habeas corpus – which was decided in a case brought by accused terrorists in Guantanamo Bay, Nancy Ratzan, the president of the National Council of Jewish Women, said, “We were relieved that we got five votes on habeas, and deeply concerned about five votes that hung together in the gun case.”

The court last week struck down a strict District of Columbia ban on handgun ownership in a case that brought the greatest number of friend-of-the-court briefs from Jewish groups of any this session.

Briefs were filed by AJCommittee, the American Jewish Congress, the Religious Action Center of Reform Judaism and the NCJW.

Marc Stern, the counsel for AJCongress, said Jews overwhelmingly support gun control because they tend to live and work in urban areas, where support for gun control is strong and gun violence proliferates.

The extent of the court decision’s impact was unclear, Stern said, because it targeted one of the strictest gun bans in the nation. New York City laws, for instance, do not ban handguns but require that owners show a special need for the weapon.

He said the court’s decision was narrow enough that it might not affect such a ban.

“What this means is full employment for lawyers for the next couple of years,” said Stern, who anticipated a flurry of challenges to gun laws across the nation.

The close decisions underscored the importance of appointments to the bench, said Barbara Weinstein, the legislative director at Reform’s Religious Action Center.

The average age of the four justices who tend to vote liberal is 75.

“More organizations in the Jewish community should be speaking out on nominations on the federal level,” she said.

Federal court decisions often do not come before the Supreme Court or are turned away. One of President Bush’s signal successes has been to stack the federal courts with conservative appointees.

“The cases that came down this term are going to affect us for a generation or more,” Weinstein said.

The NCJW has led an often lonely battle against such nominations throughout Bush’s two terms in office.

Ratzan said a decision in the previous session upholding a ban on late-term abortions made the composition of the courts “one of the three priorities” Jews should bring into the polling booth this year.

“What we do in this election is decide the legacy for our children,” she said.

The Jewish court watchers agreed that this session was not as damaging as the last to issues of concern to Jewish civil rights groups. The court ended the 2006-07 session by striking down the right of individuals to challenge funding for religion that does not directly affect them.

This session the court turned away a number of challenges to lower-court decisions on church-state issues. Among them, one upheld New York City’s decision to allow schools to display a menorah but not a creche. Another upheld a California library’s decision not to allow prayer sessions.

“The court was not willing to take the plunge” into church-state issues this session, Stern said.

Why the court chooses to take up one issue during a particular session and ignore it in the next has always been a mystery. The nine judges closely guard their decision-making process.

The decision to join the alleged terrorists at Guantanamo in challenging the Bush administration’s denial of habeas corpus rights marked the Jewish establishment’s rejoining with civil liberties groups after a number of years of silence on such issues.

Jewish groups, sensitive to the threat of terrorism, had limited their challenges of the Bush administration after the attacks of Sept. 11, 2001.

By voting to allow the detainees at Guantanamo habeas corpus rights, the court was “trying to find the right balance on security and civil liberties,” said Steven Freeman, the Anti-Defamation League’s director of legal affairs.

The AJCongress praised the decision but did not contribute an amicus brief, reflecting continued ambivalence over how to fight terrorism, Stern said. The group did not want to be identified with some commentators who insist that terrorism is best handled as a criminal matter, he said.

There were mixed results in other civil liberties decisions, the groups said.

The ADL and AJCommittee were disappointed by the decision to uphold an Indiana law requiring voter identification. They said the ruling would adversely affect the poor, minorities and the elderly, who are less likely to have driver’s licenses.