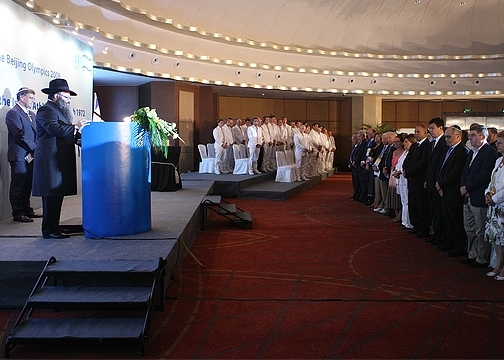 BEIJING (JTA) – Hundreds of Israeli, Chinese and Olympic officials gathered Monday at the Hilton Beijing to commemorate the massacre of Israeli athletes at the 1972 Munich Games.

While it has become a longstanding tradition for the Israeli delegation to visit the memorial to the Munich victims in Tel Aviv on the eve of their departure for the Olympics, the tradition to hold a formal memorial ceremony during the Games only began at Sydney in 2000.

The secretary-general of the Israeli Olympic Committee, Ephraim Zinger, opened the event by reading the names of the 11 athletes and coaches who were killed in the terrorist assassinations in Munich. Rabbi Shimon Freudlich of Chabad Beijing led the El-Maleh Rachamim prayer memorializing the dead.

Fourteen members of the current Israeli delegation attended, as well as coaches and officials, all of whom had finished their competitions and were heading back to Israel the next day.

“Part of their preparation is to learn and be aware of the heritage of our 11 slain athletes,” Zinger said. “All the athletes know and meet the families, and on the way to the Games they visit the memorial to the Munich victims in Tel Aviv. It is a part of their education.”

Israel’s minister of science, culture and sport, Raleb Majadele, spoke on behalf of the Israeli government but also recalled having lost two close friends in the massacre. He said the proper way to honor the Munich tragedy was “to continue to train and to continue to participate in the Olympic Games, just as we are doing here in Beijing.”

Others, however, took a more critical tone.

Zvi Varshaviak, the president of the Israel Olympic Committee, called upon the International Olympic Committee to be involved directly in commemorating the Munich massacre. Zinger said the Israelis raise the issue at every meeting with the IOC, but without results.

“Probably they are concerned about the reaction of those who will disagree with a memorial like this,” Zinger said. “There are 205 NOCs [national Olympic committees] participating in the Olympics, and there are more than a few dozen that will strongly disagree with this kind of event.”

Ankie Schpitzer, whose husband, fencing referee Andrei Schpitzer, was killed in Munich, was one of the evening’s most powerful speakers in advocating for a wider memorial to be witnessed by all the world’s athletes.

“This is not an Israeli issue, this concerns the whole Olympic family,” she said. “Our sons, fathers and husbands were no accidental tourists or visitors to the Games; they were part of it. They believed in the spirit and the dreams of the Olympics, but they all came home in a coffin.”

Schpitzer graphically recalled returning to the Israeli delegation’s quarters in the Munich Olympic village hours after the terrorist action ended in tragedy. She saw blood all over the room and a scene of devastation.

“And I kept repeating to myself, ‘Are these the Olympics they dreamt about? Was this the festival of love and brotherhood that they wanted to be part of?’ ” she thought at the time.

“The overall mood of the night was that the IOC should recognize the 11 athletes who were murdered in 1972 as Olympic victims,” Zinger told JTA. “They were Israelis, yes, but they were Olympians.”

Schpitzer said official recognition of the Munich massacre has been her cause since ’72, and promised that her children and grandchildren would continue to fight for official remembrance by the International Olympic Committee.