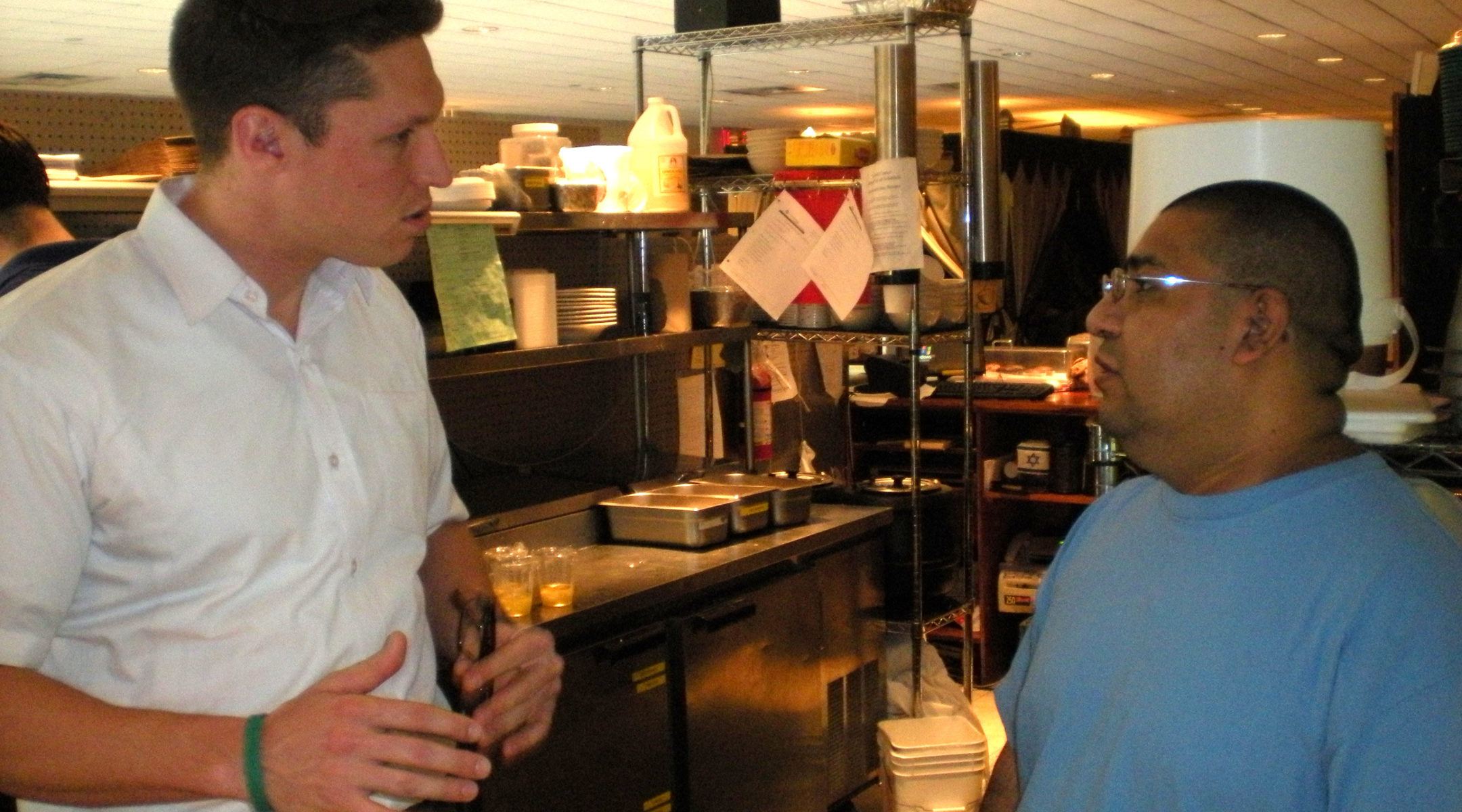 SAN FRANCISCO (JTA) — One year after a massive immigration raid at the largest kosher meatpacking plant in the United States, an Orthodox social justice organization announced the first seven recipients of its seal of ethical business practice.

Uri L’Tzedek recognized six kosher restaurants and a kosher supermarket in Manhattan with a Tav HaYosher, or ethical seal.

Mike’s Bistro, Mike’s Pizzeria and Italian Kitchen, Cafe Nana, Hewitt Dining, Your Heights Cafe, Hartley Kosher Deli and Supersol of the Westside are displaying the seal in their windows.

Uri L’Tzedek, which was founded by rabbinical students at the liberal Orthodox Yeshivat Chovevei Torah in New York, timed its announcement to May 12, the anniversary of the 2008 raid at Agriprocessors in Postville, Iowa.

Uri L’Tzedek developed the Tav HaYosher project last summer to shine a spotlight on kosher restaurants that treat their workers well, pay fair wages, give adequate work breaks and maintain a safe work environment. It is based on a similar Israeli ethical seal, Tav Chevrati, that has been given to more than 350 kosher and non-kosher restaurants in that country.

“Given recent events in the kashrut industry, it is imperative that we implement a system that will prevent abuse and exploitation,” Uri L’Tzedek’s Web site explains.

Noting that “thousands” of New York restaurant workers are paid below minimum wage, denied overtime pay and subjected to unsafe working conditions, the statement continues, “we must ensure these abuses are not taking place in kosher restaurants.”

The L.A. project, Peulat Sachir, also looks at employment conditions, but is not limited to restaurants. In fact, Rabbi Elazar Muskin of Young Israel of Century City, one of the co-creators, says the group wants synagogues to sign on first.

“Change begins at home,” he said.

Neither project is adversarial, its leaders insist. The intention is not to shame restaurants that do not meet the groups’ standards, but to publicize those who do and encourage others to follow suit.

In the Tav HaYosher program, restaurants apply for the certification and staffers visit to vet working conditions. Volunteer compliance officers trained by the organization visit the sites every four to six weeks to ensure continued compliance.

“We speak with the owners and the workers, we go through payroll records,” says Yeshivat Chovevei Torah student Shmuly Yanklowitz, one of the founders of the Uri L’Tzedek program. “There’s an anonymous tip line workers can use to call us.”

Not all applicants pass. One kosher restaurant that applied for the seal pays its undocumented workers $2 an hour, far less than the minimum wage of $7.15 an hour for non-tipped employees.

“We said, at least pay them $4.80, the minimum wage for delivery workers,” Yanklowitz said. “They said no and we walked away.”

Uri L’Tzedek has trained nearly 60 volunteer compliance officers and is developing a core group of 12. Virtually all are in their 20s or early 30s.

This summer, 10 to 15 college students will receive fellowships to spend six weeks in New York studying Jewish teachings on social justice and serving as field workers for the project.

Yanklowitz says he has fielded calls from Jewish food activists in Washington and Chicago eager to bring the program to their cities, but for now the group is focusing just on Manhattan and plans to build slowly.

The fact that the project is up and running gives the lie to the notion that it’s too difficult, or inappropriate, to monitor the ethical practices of kosher establishments, Yanklowitz says.

“There’s a huge cultural shift taking place,” he insists. “Thousands have signed on to say they will only buy from these places. The spirit of volunteerism in the young Jewish community is very strong.”