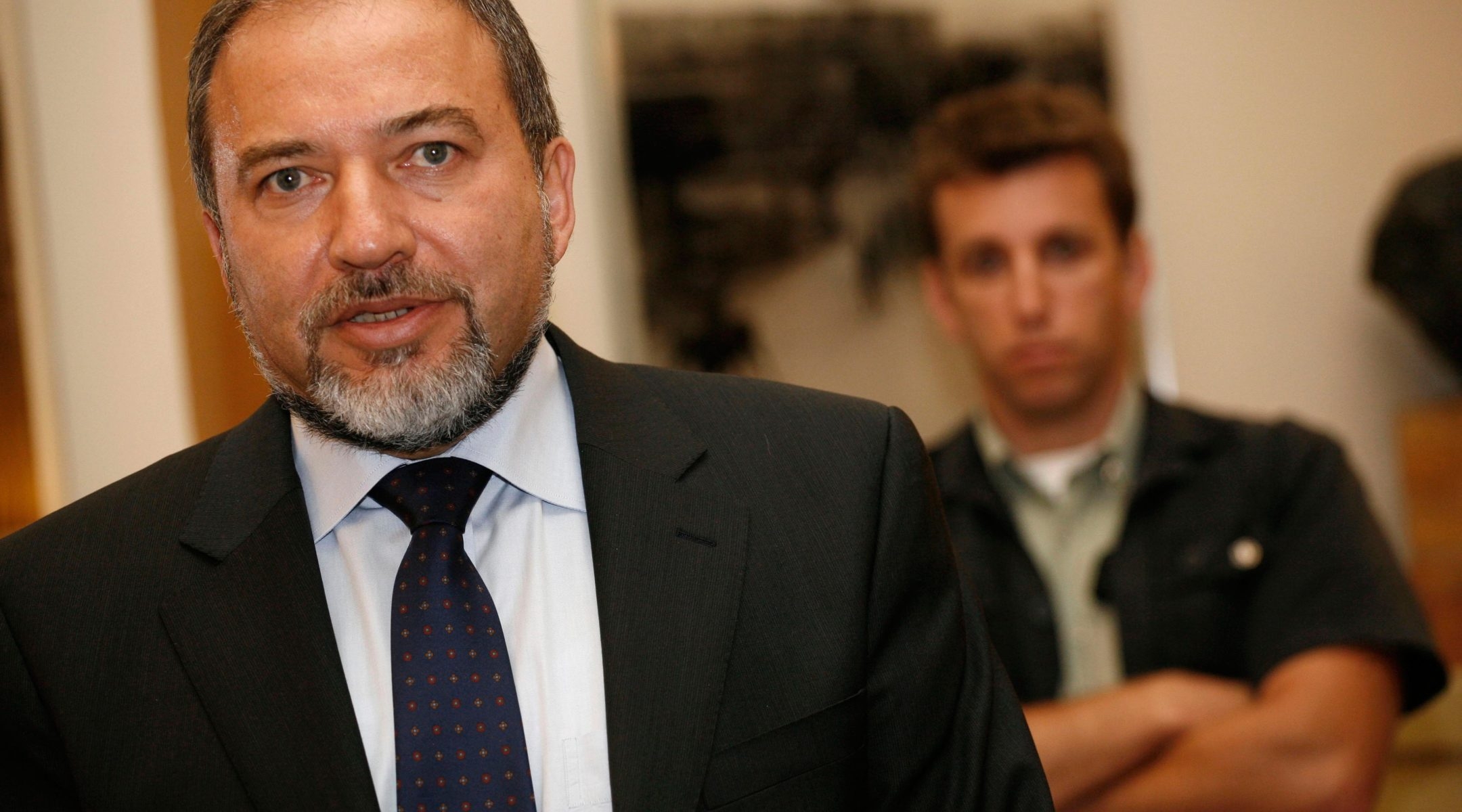 A bill favored by Yisrael Beiteinu leader Avigdor Lieberman mandating a loyalty oath as a condition of Israeli citizenship stalled in the Cabinet on May 31, 2009. (Miriam Alster/Flash90/JTA)
Advertisement

TEL AVIV (JTA) — A proposed bill in Israel calling for a year imprisonment for anyone denying Israel’s existence as a Jewish and democratic state has touched off debate here about the role and character of the country.

“Are you the thought police? Have you gone crazy?” raged Chaim Oron, leader of the Meretz Party, the standard-bearer of Israel’s left wing, during a stormy Knesset session last week.

The bill is one of a series of laws some Israeli legislators are pushing for in a bid to radically reshape Israel’s approach to its Arab minority — or at least generate discussion about it.

The most controversial one of all, which seeks to make loyalty oaths to the Jewish state a condition of citizenship, was rejected by Cabinet members Sunday. But a Channel 2 TV poll released this week found that 66 percent of Israelis surveyed said they supported the idea of a loyalty oath.

And many of the bill’s supporters in the government — which include Foreign Minister Avigdor Lieberman, who made it a cornerstone of his Yisrael Beiteinu Party’s recent Knesset campaign — have vowed to press forward with it.

Another proposal called for a ban on any public commemorations of the Nakba — the “catastrophe” of Israel’s birth — which Arabs, including Arab Israelis, commonly use to mark Israel’s Independence Day.

While not expected to pass, the bills’ proposals have sparked fierce debate in Israel about what it means that they emerged on the political horizon at all.

“These bills negate the substance of Israeli democracy,” warned Arye Carmon, president of the Israel Democracy Institute, a Jerusalem think tank, in an e-mailed reaction. “Inclusivity is the fundamental building block of democracy. Democracies, by their very nature, bind a diverse body of citizens to a unified political framework that includes and protects them irrespective of their beliefs.”

Mindful of such critiques in both Israel and abroad, Israel’s Cabinet on Sunday also watered down the so-called Nakba law. In its new form, the bill stipulates that no public funding would go to Nakba commemorations but stops short of outlawing Nakba ceremonies.

The original Nakba legislation may still be introduced independently, and the bill that mandates jail terms for deniers of Israel’s Jewish and democratic character awaits a second of three readings.

The timing of the legislation appears to have emerged from a confluence of events, at the forefront of which is the success of right-wing parties in Israel’s elections in February. In that vote, Yisrael Beitenu, whose campaign openly played on Jewish suspicions of Israel’s Arab minority, vaulted into the No. 3 spot in the Knesset.

The legislation “emerged from what we’ve been seeing in recent years, which is that some citizens here are engaging in terror activities and spying against the state,” said Tal Nahum, a spokesman for Yisrael Beitenu. “It may be a minority, but as citizens we have to demand that people have duties to take on that go along with citizenship.”

Jafar Farah, director of the Mossawa Center, an advocacy center for Arabs in Israel, said Arab Israelis are concerned that there is a targeted attempt to create a backlash against them in order to thwart progress on the Israeli-Palestinian peace front.

“There is a political agenda among the extreme right wing in Israel that wants to prevent peace by creating a new enemy,” Farah said. If Arab Israelis are provoked and become hostile, the government can then turn around and say regional peace cannot be expected because of instability within Israel itself, he said.

“They keep pushing this community, which has not been part of any military confrontation against the state since 1948, and they want to push us to the corner where we will feel forced to protect ourselves,” he said. “Any such confrontations will be a lose-lose game.”

The focus on Israel’s Arab citizens by Yisrael Beitenu and right-wing legislators coincides with a relatively new level of outspokenness by Arab Israeli rights advocates. In recent years, Arab citizens of Israel have become more vocal in expressing their political identification with their Palestinian counterparts in the West Bank and Gaza and demanding their own rights in Israel. Some have called for an end to Israel’s status as a Jewish state.

Meanwhile, polls show the level of distrust rising between Israeli Arabs and Jews. The 2007 Israeli Democracy Index found that 64 percent of Israeli Jews express distrust of Arabs. A recent University of Haifa poll found that only 41 percent of Arab Israelis recognize Israel’s right to exist as a Jewish and democratic state — a drop from 66 percent six years ago. In another dramatic change, 13 percent said they would support using violence as means of improving their lives.

David Rotem, the Yisrael Beitenu Knesset member who authored the loyalty oath bill, cited the poll as proof that Israel’s Arabs should be under suspicion.

“We must wake up and smell the coffee immediately,” he told the Israeli news service Arutz Sheva.

This week, a significant number of politicians welcomed the Cabinet’s rejection of the loyalty oath.

“I hope that such proposals never return to the government,” he said, “and that sanity will return to serve as a key component in the difficult task of managing the State of Israel.”