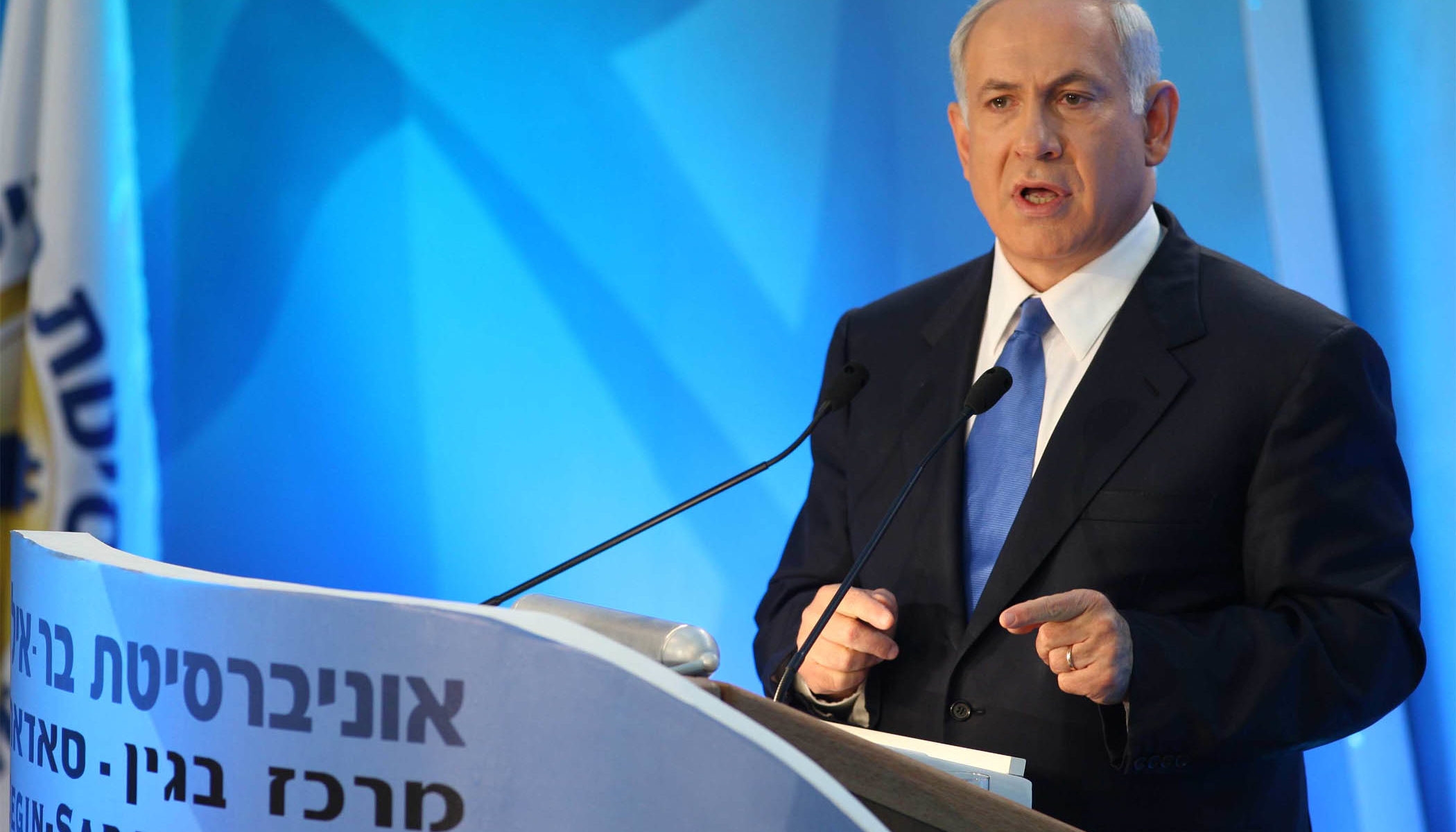 In a major policy address at Bar-Ilan University in Israel on June 14, 2009, Israeli Prime Minister Benjamin Netanyahu for the first time endorsed a Palestinian state, but with conditions. (Michael Kramer / Flash90 / JTA)
Advertisement

In a major foreign policy address Sunday at Bar-Ilan University, Netanyahu also said the Palestinians to have a state must recognize Israel as a Jewish state.

“It is impossible to agree on the principle of a Palestinian state without these” conditions, he said.

If Israel receives assurances that the two conditions are met, Netanyahu said, “we will be ready in the future” for a “demilitarized Palestinian state that exists alongside a Jewish state.” Such a demilitarized state, he said, could not import weapons, make pacts with enemies of Israel and would not be able to close its airspace to Israel.

“We want both Israeli and Palestinian children to live without war,” he said, citing the root of conflict to the refusal of regional entities to accept Israel as Jewish state. “We must ask ourselves, why has peace not yet arrived after 60 years?”

Netanyahu, whose Bar-Ilan address was called a response to President Obama’s Cairo speech earlier this month in which the U.S. leader tried to reach out to the world’s Muslims, said he was prepared to meet with the leaders of neighboring Arab countries at any time to promote regional peace.

“We want peace in Damascus, in Riyadh, in Beirut, and also in Jerusalem,” he said.

In another portion of the speech that was closely watched at the White House, Netanyahu said that Israel had no intention of creating new West Bank settlements or expanding existing towns, but said there is a “need to allow residents to live normal lives.” The Israeli leader did not expound.

The United States has demanded all settlement activity be stopped, including “natural growth.”

Netanyahu added that settlers are not “enemies of peace” but “are our brothers.”

“The President is committed to two states, a Jewish state of Israel and an independent Palestine, in the historic homeland of both peoples,” said a statement from White House press secretary Robert Gibbs. “He believes this solution can and must ensure both Israel’s security and the fulfillment of the Palestinians’ legitimate aspirations for a viable state, and he welcomes Prime Minister Netanyahu’s endorsement of that goal.”

The Obama administration did not mention Netanyahu’s statement on West Bank settlements.

Netanyahu in his speech reiterated his deep concern over Iran.

“The Iranian threat looms large in front of us, as we learned yesterday,” Netanyahu said, referring to the apparent re-election of Iranian President Mahmoud Ahmadinejad, which has brought protests in the Islamic Republic over the fairness of the election.

“The greatest danger” to the region, he said, is the intersection between “radical Islam and nuclear weapons.”

The prime minister also said that Jerusalem must remain united and that the Palestinian refugee problem “must be resolved outside Israel’s borders.”

In an apparent response to Obama’s statement in Cairo that the creation of Israel was “rooted in the tragic history” of the Holocaust, Netanyahu emphasized that the “connection between the land of Israel and the Jewish people has lasted more than 3,500 years.”

“This is not an alien land, this is the land of our forefathers,” he said. “This is the homeland of the Jewish people, this is where our identity was forged.”