In Beit Shemesh, seen here, the neighborhood of Ramat Beit Shemesh Bet has become a flashpoint in haredim trying to impose an uncompromising brand of religious fundamentalism on their community. (Dustin Royer/Creative Commons)
Advertisement 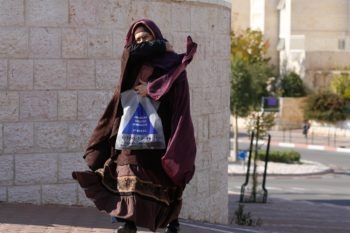 A fringe group of haredi fundamentalists in Beit Shemesh has taken to covering their faces and dressing in burka-like clothing, like the woman pictured here on Feb. 1, 2008. (Michal Fattal/Flash 90/JTA)

BEIT SHEMESH, Israel (JTA) — The 15-year-old girl remembers a roar of male voices, a blur of bearded faces and being kicked from behind as she was pelted with raw eggs.

She was with two other girlfriends who, like her, are Modern Orthodox, and they had been walking on a Friday night through a fervently Orthodox neighborhood of Beit Shemesh known for being hostile to outsiders — including fellow observant Jews like themselves.

But things had been quiet for months and the girls shrugged off any concerns. Then a mob approached.

“They were screaming at us, ‘Shame on yourselves! Get out of here!’ ” said the girl, who did not want to give her name. “There were about 50 men screaming on the top of their lungs.”

The incident was among the more recent examples of violence by a pocket of fervently Orthodox Jews in Beit Shemesh who employ sporadic violence, threaten business owners and post street signs warning women not to walk on certain sidewalks to impose an uncompromising brand of religious fundamentalism on their community.

In Beit Shemesh, a city of some 70,000 approximately 30 minutes from Jerusalem, it is the neighborhood of Ramat Beit Shemesh Bet (Beit Shemesh Heights B) that has become a flashpoint. Though the thuggish elements are relatively small in number — as few as several dozen, some say — their use of gangster tactics has sown fear among Beit Shemesh residents, who range from haredi, or fervently Orthodox, Jews to Modern Orthodox.

The neighborhood has a mall that stands only half built after some haredim threatened a boycott if separate shopping times for men and women were not designated. Stone-throwing riots erupted when the owner of a pizza parlor, who had received threats warning against allowing boys and girls to congregate together, took down a sign calling for “modesty.”

Two years ago, a woman and a male soldier who tried to protect her were beaten when the woman refused to move to the back of a public bus. The police who arrived at the scene reportedly were attacked by the crowd.

One haredi rabbi who lives in the neighborhood and spoke to JTA on condition of anonymity said that most of his neighbors, like him, oppose the behavior of the violent haredim, but they are too intimidated to act against them.

“Most rabbis definitely do not accept what is going on,” he said. “But as for coming out in public, I believe they are afraid to because if they do so, they, too, would be attacked.”

Although it has been relatively quiet in Beit Shemesh for the past year — a calm some credit to local mediation efforts — the attack on the three schoolgirls reignited tensions.

“An abomination has happened in Israel,” read a flier that was posted throughout the neighborhood after the attack. “We will not let this pass quietly.”

Written with the help of haredim who were outraged by the attack, the fliers — known in the haredi world as pashkivilim and used to disseminate information in religious communities where members rarely watch TV, listen to the radio or read newspapers or the Internet — were the result of an outreach and mediation effort launched by a group of local Modern Orthodox Jews.

Community members said the response was welcome — and surprising.

Residents were “shocked that for the first time anyone stood up to the” fundamentalists, said Rabbi Dov Lipman, a Modern Orthodox immigrant from Maryland who has been at the forefront of both confronting and mediating with the more extreme haredi sects in Beit Shemesh. “As much as we are protecting ourselves, we are also freeing those who live in the community who are under siege.”

The haredim causing trouble are mostly transplants from Neturei Karta and Satmar haredi communities in Jerusalem who migrated to Ramat Beit Shemesh Bet, like many suburbanites, in search of more affordable housing.

For years Beit Shemesh had been known as a sleepy working-class town populated mainly by Moroccan immigrants and their descendants. But in the past decade or two the demographics of the city have shifted dramatically as Orthodox Ashkenazim, ranging from haredi Jerusalemites to Modern Orthodox new immigrants from North America and England, have moved in.

Menachem Friedman, an Israeli sociologist and expert on haredim, said the haredi violence in Beit Shemesh is far more extreme than the haredi protests in places such as Jerusalem because Beit Shemesh lacks an established rabbinic authority. In larger cities, he says, rabbis generally rein in the rogues.

The extremists “think they live in an area with weak local government and a weak local population, and that lets them feel that they can maneuver and spread power and dare to act violently,” Friedman said.

A haredi who identified himself as Yisrael and hails from the more extreme haredi faction, is among those who has been meeting with Lipman. Yisrael attributes the violence to “provocations,” saying he and his cohorts will not be silent when their religious way of life is threatened.

Lipman, who teaches at a local yeshiva for American students, admits that some view as naive his efforts to broker an understanding with the extremist elements in the city. He says it’s about taking communal responsibility for his town.

“This problem is something we could not have ever imagined as we sacrificed so much to make aliyah, and we are enraged,” Lipman said. “But the problem won’t simply go away by itself. We feel that we have a responsibility to do something about it both for ourselves and on behalf of our native Israeli neighbors who understandably don’t want to take up this battle.”

New York-born Rachel Lisbon, who immigrated to Israel two years ago with her young family, lives in a neighborhood that borders on Ramat Beit Shemesh Bet. Soon after moving into her newly built apartment, she received a threatening note in the mailbox from neighbors across the street who said they could see the family’s television from their apartment across the road.

The note said that TV watching was immodest and, “Should anything happen to your family, we will not be responsible.”

Lipman helped Lisbon talk to the neighbors, and an apology was issued, but not long afterward another of Lisbon’s neighbors received a similar note.

Lisbon also participated in a gathering of her fellow English-speaking Modern Orthodox neighbors and some of their more hard-line haredi neighbors. But she left wondering how much mutual understanding was forged.

“We are just as human as they are, just as religious as they are,” she said, “though we may do things differently.”