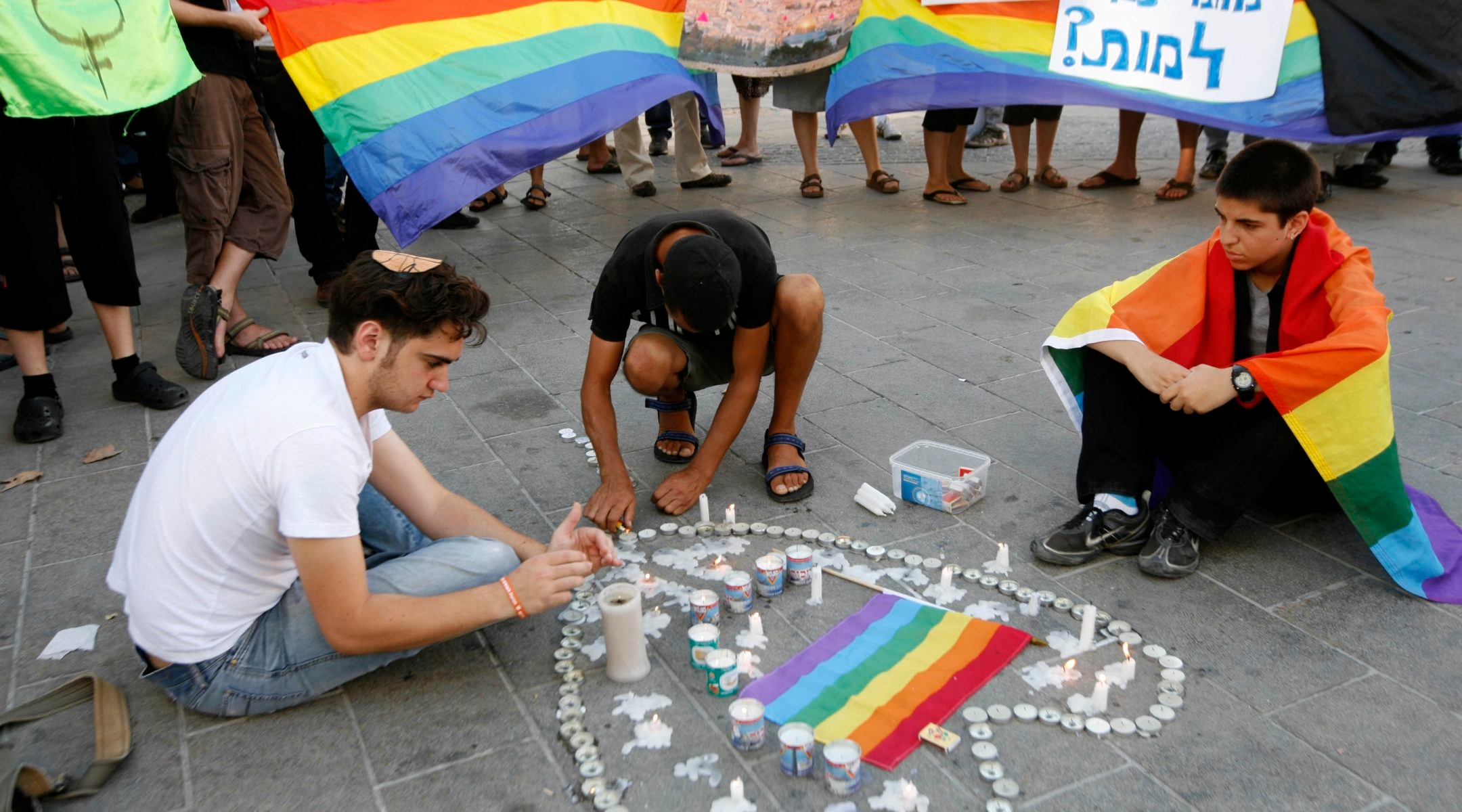 TEL AVIV (NEW YORK JEWISH WEEK) — Amid beefed-up security outside a gay community center where two young Israelis were shot and killed, the shock that greeted the attack was replaced by sobriety — and even a sense of opportunity.

Gay Israelis said the murders on Saturday night, in which a masked gunman not only killed two but wounded about a dozen others before fleeing — robbed them of a sense of security in Tel Aviv’s otherwise gay-friendly cocoon.

It also has stoked anger at fervently Orthodox groups in Israel accused of inciting hatred against gays.

Etai Pinkas, the founder and chairman of the gay community center, said that the tragedy, which some have cited as the worst hate crime in Israel’s history, has given Israel’s gay community a “teaching moment.”

“We received some focus, unfortunately,” Pinkas said. “And the focus is that we don’t have equal rights. Maybe something will start because of this.”

Pinkas was planning a gay solidarity rally for Saturday night in Tel Aviv’s Rabin Square consisting of songs and speeches. Activist groups will set up booths to distribute information about Israel’s gay community.

A day after the shooting, hundreds of gay Israelis marched through central Tel Aviv. Some pointed fingers at the Orthodox Shas Party, whose leader, Eli Yishai, has referred to homosexuals as “sick people.”

“Years of continuous incitement by Knesset members, rabbis and public figures have exacted a terrible price,” said Nitzan Horowitz, an openly gay Knesset member from the Meretz Party. “We won’t forget and we won’t forgive.”

Shas Knesset member Nissim Ze’ev, who has said that homosexuals would be reincarnated as rabbits, said he received death threats after the attack.

Israel’s Chief Rabbinate issued a statement condemning the shooting, as did Shas. Addressing a special Knesset session on the shooting, Public Safety Minister Yitzhak Aharonovitch promised to bring the assailant to justice.

Even though many gay Israelis said they feel less secure after the attack, public reaction has been sympathetic, Pinkas said. Prime Minister Benjamin Netanyahu, President Shimon Peres and others denounced the shooting. Pinkas said he hoped Netanyahu would send a message to the planned solidarity rally.

“It’s a seminal moment,” Pinkas said. “People better understand what the meaning of discrimination and the price of incitement is. Israelis don’t know there is discrimination.”

The shooting occurred just before 11 p.m. last Saturday in the basement club at the center just off of Rothschild Boulevard. The gunman entered the club and began firing randomly as youths dove for cover, said Ori Gil, 26, in an interview with Israel reporters from a hospital wheelchair.

“He didn’t shoot steadily,” Gil said of the gunman. “That was the shock. He aimed everywhere.”

Nir Katz, 26, a counselor at the center, and Liz Tarboushi, 17, were killed. Eleven people were wounded, four of them critically.

As Tel Aviv is considered unusually friendly to the gay community, the shooting surprised many. The city has a gay community center, gay representatives on the City Council and an annual gay pride parade that draws tens of thousands. At the end of this year’s parade in mid-June, Mayor Ron Huldai presided over an unofficial sunset wedding for gay couples on the beach.

Israel’s chief of police has cautioned against a rush to judgment before investigators whittle down theories on the possible motive for the shooting. In addition to a hate crime, investigators are checking to see if the attack may have been because of a personal quarrel or even a terrorism. There is a gag order in place on the investigation.

Red police tape blocked the driveway at the gay center two days after the attack. Posters reading “Silence Equals Death” and “Love, Not Hate,” hung along gay pride flags and a flower wreath courtesy of the Tel Aviv municipality. A trickle of mourners lit memorial candles on the sidewalk entrance to the building’s courtyard.

After kneeling to light a candle, Yarden, a 22-year-old army medic, said his mother called him Saturday night to see if he was at the club.

“I used to come here when I was younger. I’m shocked,” he said. “People say that they don’t know what the reason was, but it was obvious that it was homophobia. This is the first time something like this has happened in Israel.”

Pinni Altman, an Israeli American visiting from San Francisco, came with his life partner and 9-year-old son. Altman said he raised money for the center back in the 1990s.

It wasn’t so long ago that the gay community huddled into one club not much bigger than a car and feared harassment by police and roughnecks in public areas, he said. Now, Altman said, he points to Tel Aviv’s embrace of gays to counter anti-Israel rhetoric from the American left.

“I always thought Tel Aviv was the San Francisco of Israel,” Altman said. “You have to go thousands of miles to find another city that’s as gay friendly. I don’t know if it changes the reality, but it changes the picture in my head. It smashes the bubble.”

Israel has repealed anti-sodomy laws and gays are open about their sexual identity in the nation’s military. Gay marriages are not legally recognized and gay couples are not always eligible to receive certain social benefits.

Mike Prashker, the founder of Merchavim, a group that promotes pluralism among Israeli youth, said that regardless of the shooter’s motive, the attack has highlighted the difficulty of promoting tolerance among Israel’s diverse groups.

“We need to do a better job at helping Israelis of all backgrounds feel comfortable with their fellow citizens,” he said. “Ignorant attitudes toward diversity must be delegitimized, whether it’s homophobia or xenophobia.”

Avner Berenheimer, who co-wrote “Yossi & Jagger,” a film about a gay couple in the Israeli military, said the Israeli public has undergone a dramatic change in its attitudes over the past decade.

“If it’s a hate crime, then it’s the first major hate crime in Israel since the foundation of the country,” Berenheimer said. “Suddenly we’ve joined all these countries with violence and bigotry against gay people.”