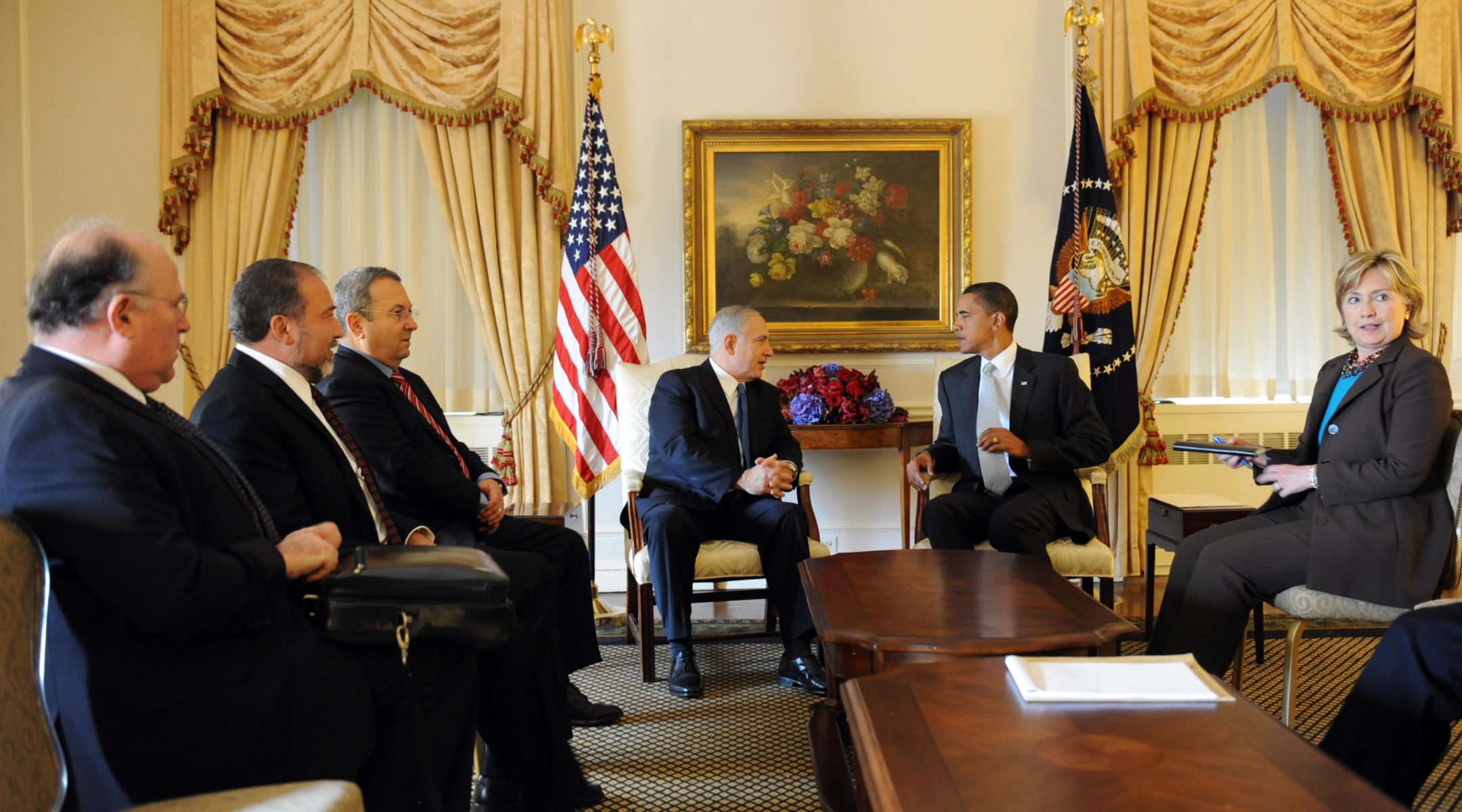 WASHINGTON (JTA) — The meetings ran overtime, and Mahmoud Abbas wouldn’t stop arguing even after he stepped into a room full of cameras.

Reporters could not make out exactly what was exercising the Palestinian Authority president in his exchange with President Obama, but fist pounding isn’t usually a sign of things going well.

The meeting and its aftermath suggested a shift in the U.S. strategy toward bringing the sides together. Instead of emphasizing a settlement freeze, which Obama has not been able to obtain from Israel, the Obama administration is charging ahead by pushing for discussion of a comprehensive, final-status deal, including Jerusalem and refugees.

The shift gives something to each side. For the Israelis, it eases the pressure for a full settlement freeze as a precondition to negotiations. For the Palestinians, it puts the issue of Jerusalem’s status and Palestinian refugees on the negotiating table; both are final-status issues that Israel does not want to negotiate now.

Abbas confronted Obama as the U.S. president was preparing to deliver a statement prior to his three-way meeting Tuesday with Abbas and Israeli Prime Minister Benjamin Netanyahu. Obama had just met separately with both leaders at the Waldorf Astoria, on the sidelines of the U.N. General Assembly in New York.

Obama’s statement was not hopeful. Instead of announcing renewed peace talks, the administration’s optimal outcome, Obama was reduced to delivering a polite kick to both leaders’ backsides. “We cannot continue the same pattern of taking tentative steps forward and then stepping back,” he said. “Success depends on all sides acting with a sense of urgency.”

Speaking on background, a senior aide to Obama spoke in blunter terms.

“The president is impatient,” the aide told JTA. “He’s determined but impatient. He wants to get talks started now. There’s a window of opportunity. We have to seize it. There’s been enough talk about talks.”

Obama praised the sides for some movement, but said they had to do more.

“Palestinians have strengthened their efforts on security, but they need to do more to stop incitement and to move forward with negotiations,” the president said. “Israelis have facilitated greater freedom of movement for the Palestinians and have discussed important steps to restrain settlement activity. But they need to translate these discussions into real action on this and other issues.”

Hopes for a breakthrough were dashed last week after a period of intensive shuttle diplomacy by George Mitchell, Obama’s top envoy to the Middle East, ended without agreement on the basis for renewing Israeli-Palestinian talks.

Palestinians objected to Israel’s failure to agree to a total settlement freeze. Israeli officials for months have pledged to institute only a freeze that would allow for “natural growth” in settlements Israel hopes to keep in a final-status deal.

Israel wants to keep the topics of Jerusalem’s status and Palestinian refugees — key final-status issues — off the table. The Palestinians want those issues on the table.

“Those are issues that have long been agreed as final-status issues,” Obama’s aide said, adding that Obama pushed for talks without any preconditions.

In his speech Wednesday to the U.N. General Assembly, Obama downplayed the issue of settlements and made his emphasis the comprehensive deal.

“The time has come to re-launch negotiations, without preconditions, that address the permanent-status issues: security for Israelis and Palestinians, borders, refugees and Jerusalem,” Obama said. “The goal is clear: two states living side by side in peace and security — a Jewish State of Israel, with true security for all Israelis, and a viable, independent Palestinian state with contiguous territory that ends the occupation that began in 1967 and realizes the potential of the Palestinian people.”

Netanyahu told reporters after the three leaders met that there was agreement on the need for talks to restart, but he did not say when or how the two sides would get to that point.

“There was general agreement, including on the part of the Palestinians, that the peace process has to be resumed as soon as possible with no preconditions,” Netanyahu said.

“We have substantially and significantly progressed in reducing the number of issues on which there is disagreement, and we hope to complete that process in the near future,” he told reporters.

Obama administration officials said the teams would meet again in New York this week and in Washington next week.

The aide suggested that Obama would forcefully resist efforts by Netanyahu to change the parameters of negotiations. Netanyahu wants for now to play down talk of two states and instead focus on economic development, with an eye on a small demilitarized entity.

“There’s a body of previous agreements and previous negotiations that all produced a series of principles that still apply,” the aide said, referring to parameters that outline a state along the 1967 borders, with Jerusalem as a shared capital. “We should build on what has been achieved.”

Both sides needed to come down from the tree, the aide said, adding that “Nobody should hold out for a perfect formula.”

Smaller Arab states are believed to favor such moves but will not come forward without Saudi Arabia. The Saudis say Arabs have been burned in the past when they made concessions and now want to see Israel move first.

In a reply to a letter from members of Congress urging Saudi concessions, Adel bin Ahmed Al-Jubeir, the Saudi ambassador to Washington, outlined a chronology of Israeli settlement growth from 5,000 in 1967 to more than 200,000 today even as Egypt and Jordan made peace with Israel, smaller Arab states initiated low-level ties with Israel and the Palestinians started peace talks.

“Given the above history, it is reasonable to conclude that an incremental approach, or one built on temporary confidence-building measures or gestures, will not work,” Al-Jubeir said. “It is our firm view that resolution of this conflict does require outlining the final settlement at the outset, followed by prompt resumption of negotiations on all final-status issues — borders, Jerusalem, water, security and refugees — with a deadline set for their early conclusion.”

Israel’s advocates in Washington pledged to continue pressing the issue as one of Israel ready to go and Arabs as recalcitrant.

“AIPAC calls on the Palestinians to follow Israel’s lead and drop all preconditions to negotiations and on the Arab states — Saudi Arabia especially — to heed the calls of both the U.S. House and Senate and President Obama to take immediate and meaningful steps toward normalization, and after 60 years, grasp the hand that Israel has outstretched in the cause of peace,” the American Israel Public Affairs Committee said in a statement.