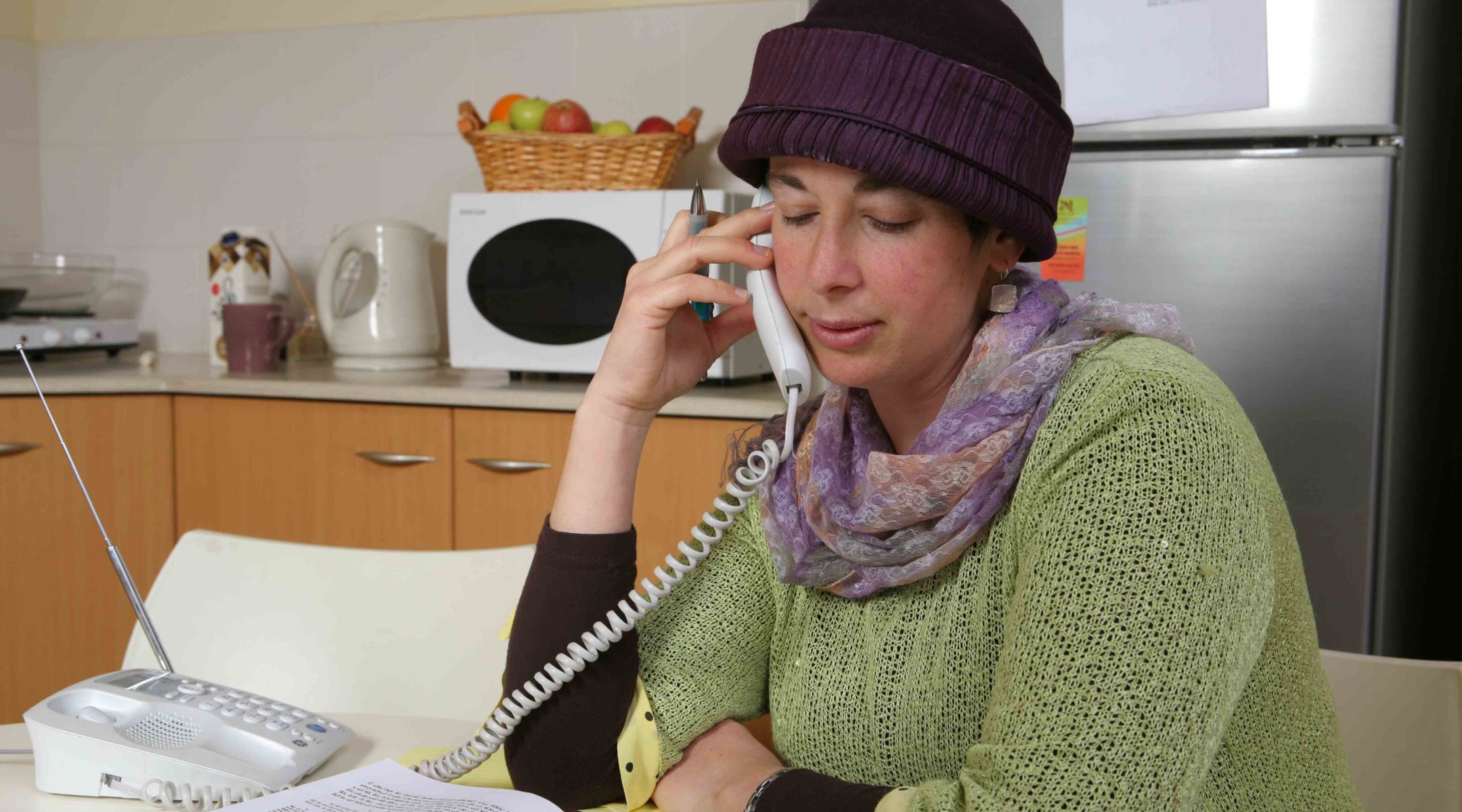 A yoetzet halachah, or Jewish legal counselor, answers a hotline for women with questions relating to Jewish laws on sex and intimacy. (Courtesy Nishmat)
Advertisement

JERUSALEM (JTA) — With Shabbat fast approaching, the sun was beginning to melt in the Jerusalem sky when the phone rang in Noa Lau’s kitchen.

On the line was a woman who spoke in a voice still raw from the grief of a recent miscarriage. She was anxious to ask Lau, trained as a consultant on Jewish law, when she could again visit the mikvah, the Jewish ritual bath, and resume physical intimacy with her husband.

Lau reviewed the relevant Jewish laws with the woman, providing her with an answer both compassionate and in accordance with halachah, or Jewish law.

“At times like this I tell myself, so what if I have cooked a bit less for Shabbat? I’ve helped calm and reassure someone who was distraught,” said Lau, one of the first women to become a yoetzet halachah, Hebrew for consultant in Jewish law.

Lau is the coordinator of an accreditation course for these consultants at Nishmat, an Orthodox seminary for women. It is the only one of its kind in the Orthodox world, and most of its graduates live in Israel.

Lau and the 60 other certified yoatzot, as the consultants are known in Hebrew, have been become accustomed to women stopping them without notice, often with a whispered, urgent question about Jewish law. Whether on their doorstep, in the synagogue or at the supermarket, women have questions for which they ache for answers but are hesitant to ask a male rabbi, especially when it comes to family purity laws — the laws relating to sex.

The emergence of women scholars serving as authorities in Jewish law marks something of a quiet revolution in an Orthodox world dominated by male authorities, where change has come slowly and incrementally. The emergence of the yoatzot — 10 years have passed since Nishmat’s program was inaugurated — also is a reflection of the advancement of women’s religious education in the modern Orthodox world.

For the women who turn to them, the yoatzot appear to be fulfilling a deep need.

Shirley Kapon, a religiously observant doctor in Ramat Gan, met with a yoetzet several times as she prepared to marry a secular man. She wanted guidance on following family purity laws, and sought a trained woman’s knowledge and depth of understanding.

“I cannot tell you how many times people have said to me, ‘Your yoatzot have saved me,’ ” said Rabbanit Chana Henkin, dean of the program at Nishmat.

“There is a lot of pain out there,” Henkin said. “If you don’t have a competent address, people will suffer. Women want ownership of their religious lives, and if they don’t understand what they are experiencing and don’t understand the laws, they feel left out.”

Women who are too intimidated to ask a halachic question often become overly severe in their observance for fear of violating Jewish law. That can lead to months or even years of suffering from unresolved medical or sexual questions — some needlessly exacerbating fertility problems, several yoatzot said.

According to traditional Jewish law, married women must refrain from physical intimacy with their husbands for at least 12 days from the onset of menstruation; the period is called niddah and ends with a visit to the mikvah. Irregular periods, bleeding and other anomalies and ambiguities prompt questions to Jewish legal authorities.

“We are dealing with an area of halachah that affects the core of our marriages,” said Atara Eis, a yoetzet in New York. “I can think of no area of Jewish law that impacts the family more, and having a proper dialogue in this area of law truly affects the bedrock of Jewish life, the family.”

Expanding women’s leadership in this area is crucial, Eis said, and rabbis are beginning to understand that.

“What happens if a woman’s physiology causes that period of niddah to last for six months?” Henkin said. “Yoatzot are finding solutions.”

The yoetzet program focuses on the study of family purity laws along with the other two fundamental areas of observant Jewish life, Shabbat and kosher laws. Students in the program take an intensive two-year course Jewish law and women’s health, studying fertility, sexuality, prenatal testing, menopause and diseases including breast cancer.

The questions the yoatzot field range from women asking if a baby born to a non-Jewish surrogate will be considered Jewish to questions from observant Israeli backpackers traveling in India asking if the Ganges River qualifies as a kosher mikvah (a mikvah must be a natural body of water).

Nishmat’s yoatzot program has a $500,000 annual budget that is privately funded and helps cover the salaries of the women who work on the hot line and the Web site.

Many of the yoatzot go on to work on a volunteer basis; there are few opportunities for pay.

Eis is one of the handful of yoatzot in the United States who is paid for her work. She works for several congregations in New York, including Manhattan’s Lincoln Square Synagogue and Kehilath Jeshurun. She consults by phone and in person at synagogue gatherings on Shabbat.

Eis says the idea of using a yoetzot is catching on, albeit slowly.

“We are off to a decent start,” she said. “We are changing from a culture of silence to a culture of discussion, and that takes time.”

In the fairly remote West Bank Jewish settlement of Hemdet, in the Jordan Valley, yoetzet Ruth Madar dispenses information and counsel to an increasing number of women, many of them the newly married wives of local yeshiva students. She receives no salary for her work.

“Especially for young women with no experience before marriage, there is a real lack of information,” Madar said of couples who have no physical contact until they marry.

“Sometimes people just have very little knowledge about their own bodies,” Lau said. “The focus on modesty education has become so central. Women are told to cover up and everything is forbidden, and then suddenly everything is permitted. The transitions can be very fast and sometimes it’s very scary.”

During a recent morning at Nishmat, women studying in the program sat in study pairs poring over religious texts. Many are mothers, and several babies gurgled on blankets near the rows of desks or in the women’s arms.

One study pair, Judith Fogel and Sara Cheses, discussed a text written in the 16th century dealing with family purity.

“I find it fascinating how early commentators understood the woman’s body and that we are now applying that knowledge and using it today,” Fogel said. “It’s a wonderful opportunity we have now that women do have access to learning in a way that extends beyond knowledge of kashrut and Shabbat.”