Op-Ed: Kristallnacht in Munich, then and now

Munich was singled out for special attention five months before the “real” Kristallnacht on Nov. 9, 1938 — when hundreds of synagogues were torched, Jewish businesses pillaged, and angry mobs chased Jews through the streets in Germany and Austria —  because it was Hitler’s political home.

The violence in Munich was triggered by the presence of the awe-inspiring synagogue on Herzog-Max Strasse, a sight unbearable to Hitler because he felt it polluted his beloved “capital of the movement.”

In the Munich of 2009, the 71st anniversary of Kristallnacht will be marked on the date commemorated the world over, Nov. 9, by a Jewish community that no longer appears to be living in fear.

Not coincidentally, the date also will mark the third anniversary of the dedication of a magnificent new synagogue and Jewish community center located within a central square in the heart of the city, adjacent to the city’s Jewish museum.

Munich Jewish community leaders, eager to declare that their past won’t ever be forgotten even as they build for the future, deliberately chose the dedication date in 2006.

It is a bold statement: Bavarian Jewry is back and here to stay.

It’s hard not to be skeptical. This is Germany, after all. But spending Shabbat in Munich nearly assuages the doubts.

One Friday in October, fresh from several days in nearby Oberammergau, where I engaged in Christian-Jewish dialogue regarding its infamous Passion Play, I arrived to witness the Munich Jewish community in action.

I sat in on an Ivrit b’Ivrit (only Hebrew spoken) lesson at the day school, complete with Smart Boards and the latest Israeli curricular bells and whistles. German-Jewish children speaking Hebrew!

The Friday evening Shabbat service at the Ohel Jakob synagogue was followed by a festive communal dinner. On Shabbat morning, the congregation celebrated the bar mitzvah of a young man of Russian-Jewish descent who skillfully chanted the maftir and haftarah.

The rabbi has assiduously restored the fabled German-Jewish synagogue traditions, including formal dress — he and the cantor wore black-tie clerical garb and ecclesiastical hats — a choir (also in black tie) singing classic German-Jewish melodies and cantillations, and the legendary decorum. Closing my eyes, I imagined German Jewry in its heyday.

I observed what was taking place around me with admiration and some astonishment, but also with some sadness for what had been lost. Frankly I was a bit spooked by this German-Jewish renaissance and by the elaborate security that is a fact of life for Jewish institutions in Munich.

After World War II, a small group of Munich’s survivors joined forces with displaced Jews, mostly from Poland, to establish the new Jewish community in the city. It was rough going at first, as these Munich Jews wondered whether there was any justification to the attempt to establish a community, but an enormous influx of Russian Jews returned Munich to its pre-World War II Jewish population.

Today this amalgam of Shoah refugees and their descendants, Russian Jews and some Western transplants — including Americans and Israelis — are blessed with enviable institutions. There are four synagogues — three Orthodox and one Liberal — a Chabad presence, a Jewish bookstore better stocked than most in New York and a smattering of kosher food outlets.

The central address of the Jewish community of Munich and Upper Bavaria is the modern, imposing Ohel Jakob synagogue, which resembles the Israelites’ portable Tabernacle described in the Torah. Connected to it through an underground passageway is a state-of-the-art community center, complete with a day school that enrolls 180 children from preschool through fourth grade, a world-class kosher restaurant, a mikvah, a library, and numerous offices and public spaces.

The capital campaign to pay for all of this raised tens of millions of euros funded by the Munich municipality, the Bavarian state, and donations from Jews and others. Germany wants the Jews to feel at home and was willing to pay a significant share of the cost.

Should Jews be back in Germany? Is there a Jewish future in this tainted land?

Today’s German Jews have learned to live with these questions, but they are too busy rebuilding what has been — at least until Germany changed its immigration laws in 2005 — the fastest-growing Jewish community in the Diaspora to allow it to affect them. If Munich is any indication, German Jewry has arrived.

Deep in the eerily peaceful underground passageway between the synagogue and the community center is a haunting memorial to the 4,500 Munich Jews murdered by the Nazis. A few flights above, the voices of Jewish children celebrate the arrival of Shabbat with the weekly Friday Kabbalat Shabbat program.

Kristallnacht was the beginning of what many believed to be the end, but now there is a new beginning. As it has so often in the past in so many different places, a Jewish community has reinvented itself, with allegiance to the past and promise for the future. 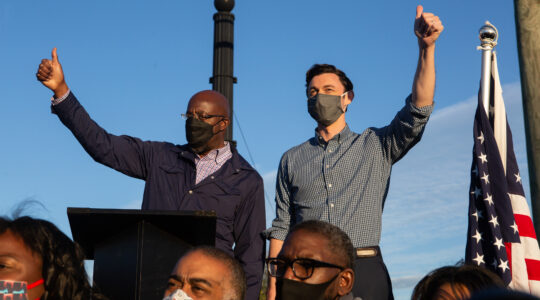 Partisan actors are using Israel to divide Black and Jewish voters. Let’s not let that happen in Georgia.