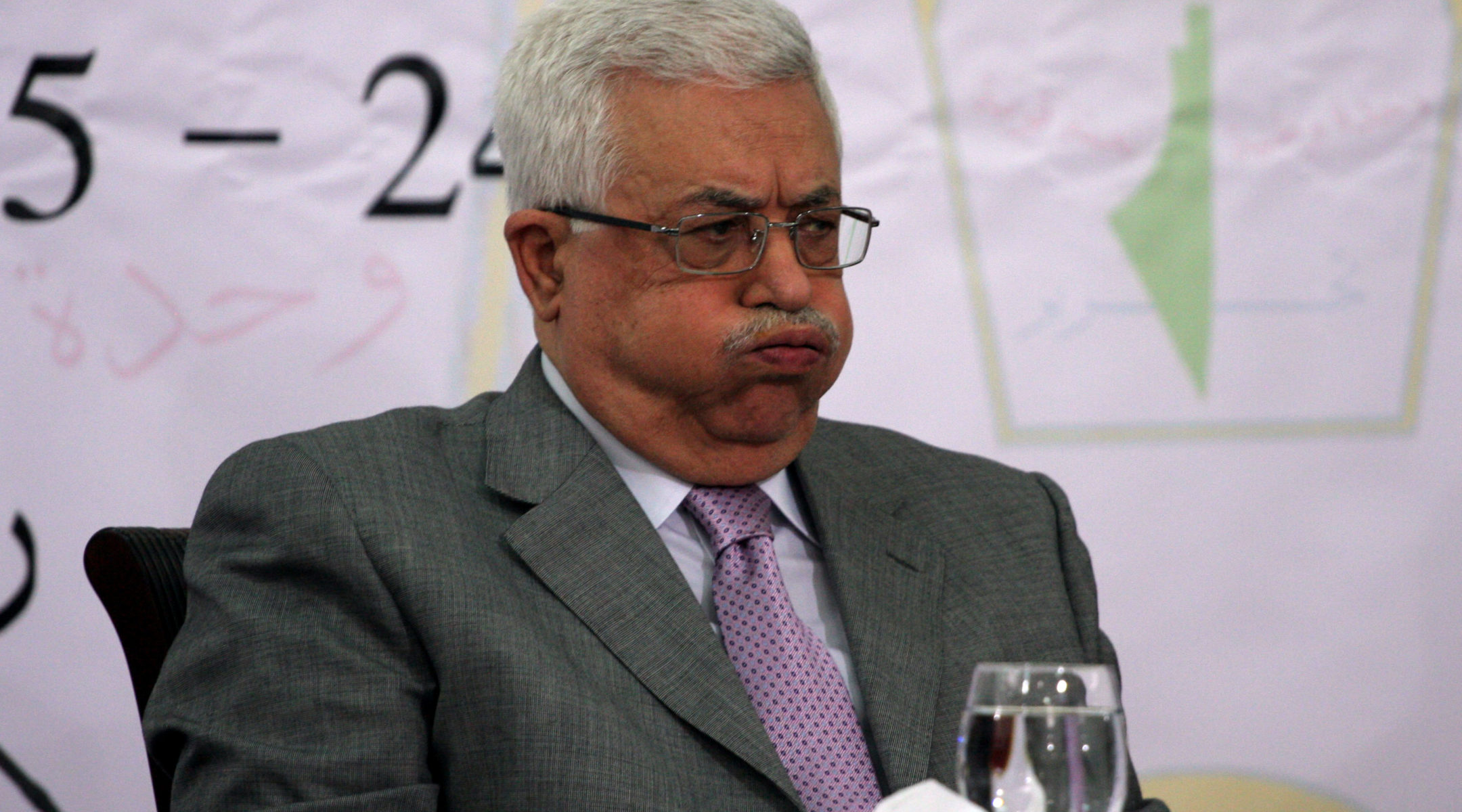 Palestinian Authority President Mahmoud Abbas, shown speaking in Ramallah on Oct. 24, 2009, is insisting that his decision to resign is not a tactical ploy. (Issam Rimawi / Flash 90 / JTA)
Advertisement

JERUSALEM (JTA) — Just as he hoped it would, Palestinian Authority President Mahmoud Abbas’ threat to resign has concentrated the minds.

Both Israel’s prime minister and the U.S. president are considering new ways to kick-start the stalled Israeli-Palestinian peace process in a bid to keep the two-state vision alive. Benjamin Netanyahu and President Obama both fear that Abbas’ departure could lead to instability, chaos and even violence in the Palestinian-populated territories.

With the process deadlocked ever since Israel went into a new election cycle more than a year ago, an element of desperate brinkmanship is in the air. Abbas threatening to resign is aimed at pressuring the United States and Israel to come back with a serious offer.

Abbas, 74, announced last week that he would not seek re-election in a ballot scheduled for January. One of the main reasons he gave was a profound sense of betrayal by the U.S. administration after Obama dialed back the pressure on Israel for a full settlement freeze.

“We had high hopes in President Obama — they had a very clear attitude on settlements –but it turned out that the American administration favored Israel,” Abbas declared.

Abbas had understood from Obama that he would force Israel to stop all settlement construction and then launch peace talks. The Palestinian leader believed the policy would push Netanyahu into a corner and possibly even topple his Likud-led government for one more likely to cut a deal with the Palestinians.

Taking his cue from Obama, Abbas made a full freeze of settlement construction a precondition for talks.

But when the Americans backed down several months later after Netanyahu offered a slowdown but not a freeze, Abbas was left high and dry. He held to a condition he could not abandon without losing face among his people, but he could not approach the negotiating table so long as he stuck to it.

The last straw was U.S. Secretary of State Hillary Rodham Clinton’s statement early last week aligning herself with the Israeli view of the settlement issue. Clinton backed Israel’s claim that the Palestinians had never before made a settlement freeze a condition for talks before, and she praised Netanyahu’s agreement to restrictions on settlement building in the West Bank as “unprecedented.”

Clinton’s forthright language stunned the Palestinians. For Abbas it meant his gamble on a settlement freeze had failed. A few days later he announced his intention to step down.

While insisting that his decision was not a tactical ploy, he raised the specter of the two-state solution for which he had worked so hard slipping away.

Abbas also finds himself in a no-win situation with regard to Hamas. If he backs down on settlements, the fundamentalists will accuse him of being an Israeli-American lackey. If he resigns, they will say his resignation is proof of their thesis that negotiations with the Zionist enemy can only lead to grief.

For Abbas, who had hoped to regain legitimacy as leader of all the Palestinian people through the ballot box, this is another source of deep frustration.

A third source of frustration is Netanyahu’s refusal to recognize the progress Abbas made with the previous Israeli government under Ehud Olmert. Abbas says he was very close to an agreement with Olmert: On borders, he says, they were already reviewing detailed maps, and on the thorny question of the right of return to Israel for Palestinian refugees, Abbas says the differences were only over numbers.

Abbas would like to continue negotiations from the point Olmert left off. But by insisting on “no preconditions,” Netanyahu seems to be indicating that he wants to start from scratch.

To break the impasse, P.A. Prime Minister Salam Fayyad is considering declaring independence unilaterally if the United States agrees to back a self-declared Palestinian state along the 1967 borders. But other voices in the Palestinian camp are talking about a return to armed struggle and a new intifada.

What makes the situation even more volatile is the lack of an obvious successor to Abbas if he goes through with his threat to stand down. The front-runner is the jailed former leader of the young Fatah military cadres, Marwan Barghouti, who would likely take a more militant line toward Israel — if he’s even able to compete.

Abbas’ move has forced early decision time on the main players: Obama must decide whether to work with Netanyahu to appease Abbas — by, for example, getting the Israelis to release Fatah prisoners and make a serious peace offer — to disengage altogether until both parties are ready to talk business, or to shake things up by putting a detailed American peace plan on the table.

Netanyahu must decide whether to seize the moment to launch a major peace initiative or face the consequences of a resignation by Abbas that could spark chaos on the Palestinian side. If he really wants to convince Abbas to stay, he will have to make a far-reaching offer on settlements or on substance.

Although there has been no hard evidence yet, confidants say he is ready to go much further than most people expect.

The next few weeks could be crucial.