Can West Bank improvements hold in 2010? 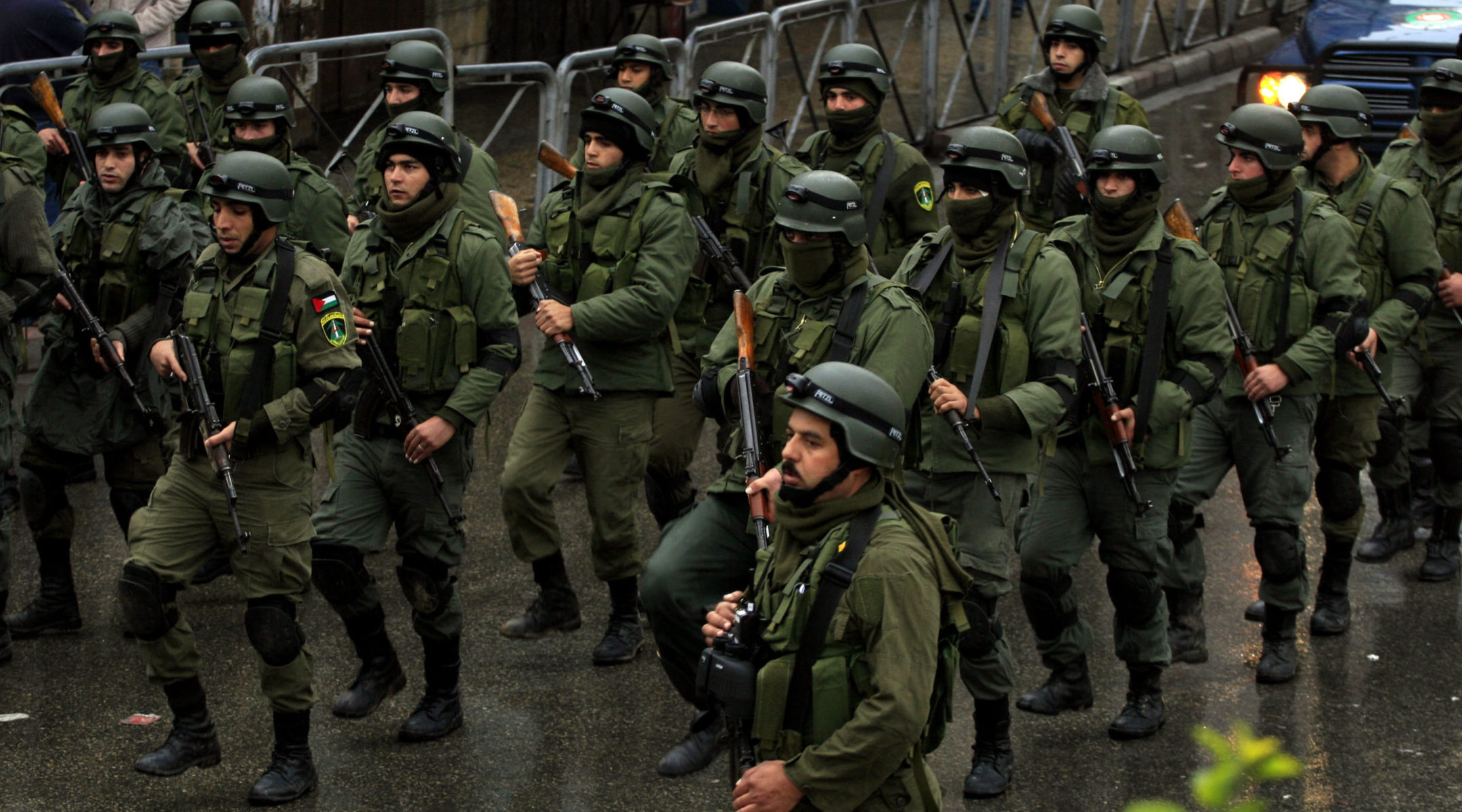 Members of the Palestinian security forces marching through the West Bank city of Ramallah as part of a training session, Dec. 18, 2009. (Issam Rimawi / FLASH90 / JTA)
Advertisement

JERUSALEM (JTA) – In Israel and the West Bank, 2009 was the year that ended without a bang — and people were grateful for it.

Shooting attacks were down to 22 in 2009 from 83 the previous year, while the use of explosive devices fell to 13 from 54. Of the 633 recorded terrorist incidents in 2009, more than 90 percent were considered minor — including the throwing of stones or Molotov cocktails.

The decline owes both to Israeli and Palestinian practices.

The security fence Israel erected in the West Bank is proving to be a highly effective barrier against terror spilling over from the West Bank into Israel proper.

Inside the West Bank, besides the deployment of roadblocks and checkpoints, Israeli troops have honed a successful modus operandi around Palestinian cities: During the day they usually stay out of sight, and at night, acting on real-time intelligence, they move in on would-be terrorist cells.

More important than enhanced Israeli anti-terror capabilities, however, is the sharp decline in Palestinian efforts to wage terrorist attacks.

Palestinian Authority President Mahmoud Abbas, in power since 2005, has consistently opposed the use of violence as a means of attaining Palestinian goals. He argues that when pitted against Israel’s military superiority, it is ineffectual and ultimately self-defeating.

Terrorism also does not sit well with PA Prime Minister Salam Fayyad’s two-year state-building project, which requires a modicum of stability and a great deal of international support.

The West Bank also is in the midst of a major economic boom, which a new round of terrorist attacks would undermine.

Underpinning the newfound calm is the successful training and deployment of local Palestinian forces, responsible for law and order in major West Bank cities. Since 2006, U.S. Lt.-Gen. Keith Dayton has been building a Western-style gendarmerie intended to provide the security foundation for the would-be Palestinian state. The carefully vetted recruits are sent on intensive four-month training courses at a base near Amman, Jordan, run by U.S., Canadian, British and Turkish instructors, and return to the West Bank imbued with new Western standards of policing.

The results on the streets have been dramatic: Armed gangs have disappeared and crime rates are down, and there is a new can-do social and economic atmosphere fueled at least partly by the new sense of law and order.

In the context of local Palestinian politics, the National Security Force, known derogatively as “Dayton’s Army” by its detractors, is very much an arm of Abbas’ Fatah Party. As such, it is helping to keep a lid on violence by its more radical Hamas rivals. This also helps explain the decline in terrorist acts against Israelis in 2009.

The establishment of the new security force is an integral part of Fayyad’s state-building plan. Not only are Dayton’s men set to provide the security nucleus of the emerging Palestinian state, their uniformed presence on the streets is perhaps the most overt sign for Palestinians that their state indeed may be on the way, again reducing the incentive for Palestinian violence.

The law and order imposed by the combined efforts of the Israel Defense Forces and the Palestinian security force has enabled Israel to eliminate dozens of roadblocks and checkpoints, allowing more freedom of movement. This has helped accelerate the economic boom in the West Bank, itself one of the strongest brakes on Palestinian terrorism.

By any standards, the boom in 2009 has been impressive. Economic growth in the West Bank reached 7 percent — far higher than in Israel or the West. Tourism to Bethlehem, which doubled to 1 million in 2008, was up to nearly 1.5 million in 2009. New car imports increased by 44 percent. Gleaming new shopping malls opened in Jenin and Nablus. Palestinian developers are planning to build the first modern Palestinian city, Rawabi.

Law and order, the boom and the state building all augur well for peacemaking over violence.

“One of the things holding back progress towards a permanent settlement is an Israeli concern that there is no one on the other side capable of cutting a lasting deal,” Shlomo Brom, director of the program on Israel-Palestinian relations at the Tel Aviv-based Institute for National Strategic Studies, told JTA. “But the more you go forward on the state-building project, the more you will be able to overcome that lack of confidence.”

Yet as encouraging as today’s trends are, it all could unravel very quickly.

With Israeli-Palestinian peace deadlocked for more than year, Palestinian leaders have begun showing a degree of ambivalence toward terrorism. In late December, Abbas commemorated the 50th anniversary of the birth of female terrorist Dalal Mughrabi, and the governor of Ramallah named a square in her honor. Mughrabi was one of the leaders of a 1978 bus hijacking in which 38 Israelis, including 13 children, were killed.

Security experts estimate that potential Palestinian militants have about 120,000 weapons hidden underground in the West Bank, all of which could come out should the situation deteriorate. That’s aside from the possibility that in a crisis, Palestinian security forces could turn their guns on Israel; that happened when the second intifada broke out in 2000.

Past experience shows that economic prosperity alone is no guarantee of peace and quiet. Both previous Palestinian intifadas, in 1987 and 2000, erupted at a time of economic growth.

Whether the West Bank terrorism statistics rise or fall in 2010 could depend on whether or not serious peace talks between Israel and the Palestinians get off the ground.