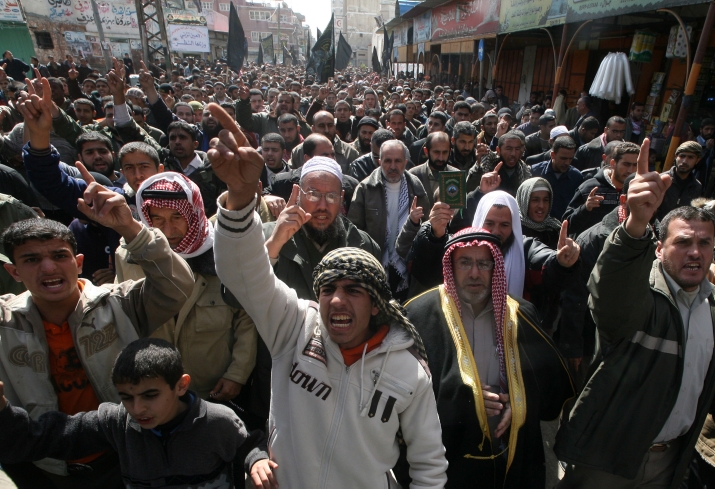 Bold strokes, but already Biden’s initiative is being dogged by scribbly little details — timing on Iran, building in Jerusalem, restoration in the West Bank, and just how far apart will Israelis and the Palestinians sit.

Biden was set to meet Tuesday afternoon with pro-Israel leaders and the White House’s top Middle East staffers, evidently in a bid to see how he can smoothe the picture’s corners before heading to Israel. The meeting, at the vice president’s home, is hush-hush — a sign of how vexing some of the problems have been.

* Plans by Jerusalem’s mayor to level some Palestinian dwellings and move the families elsewhere;

* A Palestinian reluctance to return to direct talks, resulting in awkward “proximity” talks, where the parties communicate only through a U.S. interlocutor;

* Israeli anxieties about the Obama administration’s reluctance to go for the jugular ASAP in confronting Iran.

The decision causing the greatest waves this week has perhaps the smallest bore: Netanyahu announced plans to include the Cave of the Patriarchs in Hebron and Rachel’s Tomb in Bethlehem among 150 heritage sites entitled to about $100 million in renovation funds.

Both sites are in heavily Palestinian areas. U.S. officials reportedly have blasted their Israeli counterparts for the decision, and the Palestinian Cabinet held its most recent meeting in Hebron to protest. Palestinian protests in Hebron last week spilled over into Friday afternoon rioting at the ultrasensitive patch of Jerusalem land where two mosques abut the Western Wall.

Hamas, the Islamist terrorist group controlling the Gaza Strip, called for the launch of a new intifada, and Palestinian Authority President Mahmoud Abbas fretted that the Israeli decision could lead to religious war.

“These sites are in occupied Palestinian territory and are of historical and religious significance not only to Judaism but also to Islam, and to Christianity as well,” said Robert Serry,  the U.N. special coordinator for the Middle East peace process.

True enough, Israeli officials say — and they have facilitated renovations to the Muslim part of the Patriarchs’ cave in the recent past, undercutting arguments that this is part of an attempt to “Judaize” the sites.

“This is not in any way changing the status quo,” Netanyahu spokesman Mark Regev told JTA. “This is about renovating important historical and religious sites of the Jewish people.”

Settler leaders said the Palestinian reaction underscored how important it is to remind the world of the Jewish stake in the sites.

“The reaction of the Palestinians shows how important it was,” Danny Dayan, chairman of the Council of Jewish Communities in Judea, Samaria and the Gaza Strip told JTA. “They erroneously thought the Jewish people had abandoned” the sites.

Netanyahu is not insensitive to the appearances of such initiatives.

On Tuesday, his government talked Jerusalem’s hard-nosed mayor, Nir Barkat, into delaying a scheduled rollout of his plan to move out Palestinians living in Silwan, neighboring the Old City, and to raze their homes for a park. The mayor would offer the Palestinians the opportunity to build elsewhere.

But the prime minister leads a government that is predominantly right wing, and that includes parties that draw support from West Bank Jewish settlers and their sympathizers. In a bid to simultaneously please the United States, Israel’s best and closest ally, and his hardest-line constituents, he ends up veering both ways.

In meetings last week, top Israeli officials dropped their demand for direct talks with the Palestinians and agreed to “proximity” talks, the cumbersome process where every back-and-forth runs through U.S. diplomats.

That was a “get” for the Obama administration, but it was followed this week by Israel’s announcement of building starts in the eastern Jerusalem neighborhood Pisgat Ze’ev. And that earned a rebuke.

“We have relayed our strong concerns to the Government of Israel that this kind of activity, particularly as we try to relaunch meaningful negotiations, is counterproductive and undermines trust between the parties,” Crowley said in a statement Monday.

The Obama administration advocates a holistic approach to tamping down Middle East tensions. Its officials want to see Israeli-Arab talks moving while rallying international efforts to isolate Iran as long as it fails to make transparent its nuclear plans.

Again, the Israelis are happy with any effort to push Iran back from the nuclear brink — but the devil is in the details. The Obama administration is still operating on assumptions that the Iranians are several years away from weaponization, while the Israelis are convinced that it will happen before 2010 is out.

That has led Israel to press the Obama administration to adopt unilateral and punishing sanctions targeting Iran’s energy sector immediately. Such sanctions are written into bills that have passed both chambers of the U.S. Congress and are backed by almost every pro-Israel group.

The Obama administration will not count out the so-called “crippling” sanctions, but prefers for now to focus on getting the U.N. Security Council to adopt more narrow sanctions targeting the Iranian leadership.

Israeli Defense Minister Ehud Barak made his country’s case last week in Washington in meetings with top U.S. officials. He emerged confident that the relationship was as sound as ever, but nonetheless noted differences on Iran in an address Feb. 26 to the Washington Institute for Near East Policy.

Barak, however, could not resist a subtle jab at Americans who do not have the same stake in protecting the region from Iranian hegemony.

“We clearly think that in spite of the fact that from America, when you look at a nuclear Iran, you already have, just besides allies like France and UK, you have a nuclear Russia, nuclear China, nuclear India, nuclear Pakistan, North Korea is going toward turning nuclear,” Barak said. “So probably from this corner of the world, it doesn’t change the scene dramatically.

From a closer distance, in Israel it looks like a tipping point of the whole regional order with a quite assured, quite certain consequences to the wider world, global world order.”