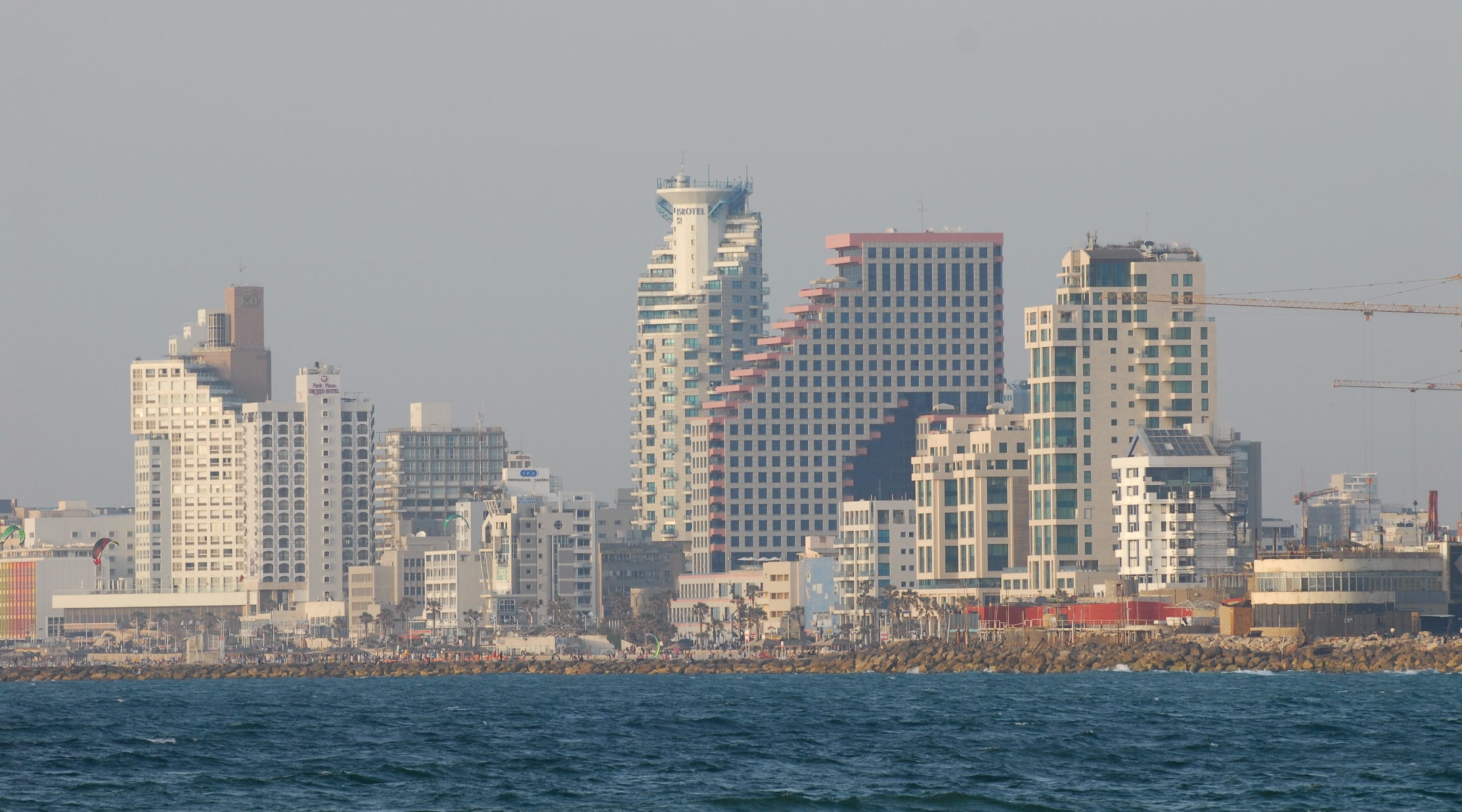 Tel Aviv, whose skyline is visible along its beach, has outlawed the construction of new skyscrapers in the city center. (Gili Yaari / Flash90)
Advertisement

JERUSALEM (JTA) — Here are some recent stories from Israel that you may have missed.

A (gray) whale of a tale

The whale reportedly followed a Russian ship from Turkey into the Haifa port. Gray whales live in the north Pacific and migrate to warmer waters off of Mexico in the fall.

Some scientists believe the whale got through the Northwest Passage, which links the Pacific and Atlantic oceans. In the past, the route through the Arctic Sea has been blocked by ice all year round, but it is now open at certain times of the year due to global warming, according to reports.

The whale left Haifa Bay five days after it arrived, without the help of scientists.

“Over a lifetime, a gray whale migrates the equivalent distance of a return trip to the moon. However, these new images show that this particular whale would have had to beat all previous distance records to end up where it has,” whale expert Nicola Hodgins said.

The King is dead, long live the ranch

Burger King will close its doors in Israel this summer after losing out to a local burger chain.

The 55 Burger King fast food restaurants will be renovated and reopened as Israeli Burger Ranch restaurants.

Burger Ranch first opened in Israel in the 1970s, beginning with two branches in Tel Aviv. When McDonalds entered Israel’s fast food market in 1993, Burger Ranch had nearly 50 restaurants and was the largest restaurant chain in the country. Israelis appear to prefer an Israeli-style burger to Burger King’s American-style Whopper, the company said in a statement.

Burger King joins Starbucks, Wendy’s and Dunkin’ Donuts as American franchises that did not make it in the Israeli market.

The same week as the Burger King announcement, McDonald’s Israel announced it is launching a new lower-fat hamburger. Israel’s Big Mac already has 30 percent fewer calories than a Big Mac in the United States; now it will have only 9 percent fat compared to the 19 percent fat of an American burger.

Bar and the great iPad caper

Israeli supermodel Bar Refaeli was caught trying to smuggle an iPad into the country.

Refaeli put her luggage through the nothing-to-declare line at customs, saying that all she had in her bags was clothing, but an X-ray of her bags showed a new Apple iPad.

The Israeli supermodel, who returned home to Israel to make a brief commercial appearance, will have to pay at least twice the amount of import tax that would have been charged on the device.

Israel recently lifted a ban allowing personal imports of the iPad into the country. Items brought into Israel worth more than about $200 are subject to duties.

In January, Refaeli asked the Israel Tax Authority to exempt her from paying taxes because she works mostly abroad and, as she put it, “The center of my life is no longer in Israel.” Refaeli earned about $2 million over the past two years, according to reports, and paid about 46 percent in taxes in Israel.

The Tel Aviv municipality will no longer approve the construction of skyscraper buildings in the center of the city.

The new policy is part of the Tel Aviv 2025 plan created by the city’s engineering administration, Ynet reported. Buildings under construction can go forward, but those in the planning stages have been dumped, the news service said.

The new plan does not address the eastern part of the city.

Free dental care for kids gets a root canal

The high court revoked the government’s decision, saying that the health basket funds were not earmarked for dental care. The $17.2 million plan was supposed to begin in July. The Health Ministry responded to the ruling by saying it will continue to seek ways to subsidize dental treatment for children.

A gold coin bearing the likeness of 19th century-French ruler Napoleon III was found during an archeological excavation in Jaffa.

The 10-franc coin with a picture of the nephew of Napoleon Bonaparte was minted in Paris in 185, and is made of almost completely pure gold.

The discovery of gold coins during archaeological excavations is a rare occurrence, according to Robert Kool, a numismatist with the Israel Antiquities Authority. Coins have been found in the past in Tel Aviv and Beersheba, attesting to the popularity of European gold throughout the world until the end of World War I.

Meanwhile, part of an ancient aqueduct that carried water to the Temple Mount was uncovered during an excavation during sewage infrastructure near Sultan’s Pool in the walls around Jerusalem National Park.

“The bridge, which could still be seen at the end of the nineteenth century and appears in old photographs, was covered over during the twentieth century. We were thrilled when it suddenly reappeared in all its grandeur during the course of the archaeological excavations,” said Yehiel Zelinger, excavation director on behalf of the Israel Antiquities Authority.

The Israel Antiquities Authority, in cooperation with the Nature and Parks Authority, is working to expose the entire length of the arched bridge, conserve it and integrate it in the framework of the overall development of the Sultan’s Pool, as part of underscoring the importance of the water supply to Jerusalem in ancient times.

Israeli lawmakers are set to attend a government-sponsored finishing school.

The members of Israel’s Knesset will learn how to better represent Israel abroad after completing their classes on improving self-confidence, public speaking and dressing for success. The classes will be led by expert academics and media figures, as well as by some fellow lawmakers with media experience.

Attendance at the classes, which will begin in the coming months and will be held for several hours over the course of one week, will not be mandatory, but highly recommended, Ynet reported.

The new program was initiated by the chairman of the State Control Committee, Yoel Hasson of the Kadima party, after several lawmakers admitted to difficulty in meeting the challenges of confrontation in front of audiences around the world.

“The 120 members of Knesset are the State of Israel’s ambassadors in their appearances around the world and in Israel,” Hasson said. “Some of them are well acquainted with PR work, but there are quite a few that need guidance, assistance, and tools to get to know the subject better. This course can also help the more experienced, as well as the less experienced.”