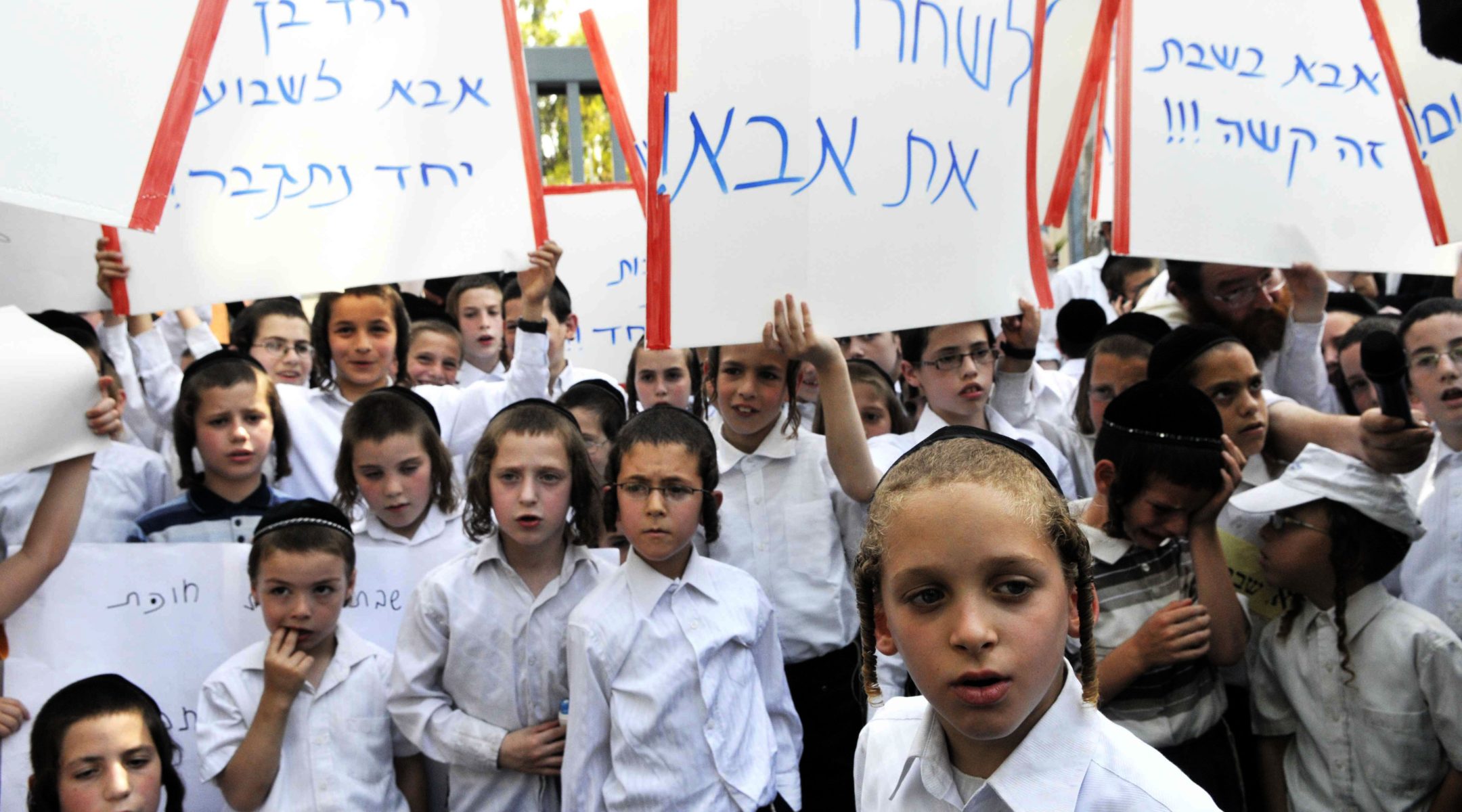 Haredi Orthodox children protest opposite the Ramle prison, where a group of haredi parents were jailed for defying a court order to send their daughters to a school in Emanuel, June 18, 2010. (Yossi Zeliger / Flash 90 / JTA)
Advertisement

NEW YORK (JTA) — The recent Israeli Supreme Court ruling against parents of students in the Jewish town of Emanuel and the ensuing massive haredi-Orthodox demonstrations on the parents’ behalf present an opportunity either to jump to conclusions or objectively evaluate the facts.

Several Sephardic parents – Israelis of North African and Middle Eastern backgrounds – in the town brought a lawsuit aimed at preventing other parents of students who had been studying in the local Beit Yaakov girls’ school from maintaining a new school the latter group had established.

The court ruled that the new school was born of illegal ethnic discrimination and later that the “new school” parents’ subsequent second choice – to send their daughters to a school in another city – also was forbidden to them.

The court fined those parents for each day they refused to comply with its order to return their children to the Emanuel Beit Yaakov, threatened them with prison and then made good on the threat. On June 17 the parents, wearing their Sabbath clothes, were held aloft and given a send-off to the prison by a peaceful crowd of tens of thousands singing and dancing in a demonstration of support for the parents.

What gives here? There are two versions.

First, the one presented by most media: Racial prejudice lay at the root of the parents’ desire for a separate school for their children and their refusal to abide by the court ruling. The large number of supporters who turned out on their behalf reflected a general haredi Ashkenazi disdain for Sephardim.

Version 2: The jailed parents sought only to preserve the religious standards the Emanuel school had maintained for many years. Changing demographics over the years in Emanuel brought an influx of families with less stringent standards of Jewish observance, dress and insularity (including things like the use of the Internet and personal messaging, which are shunned by many haredim for religious reasons) than the original residents of the town.

Some of the longtime residents with school-age children saw a need for two different educational institutions to service Emanuel’s girls. That most of the new families happened to be of Sephardic heritage played no role at all in that decision.

The first version was endorsed by Israel’s Supreme Court, which pronounced that the new school evidenced prejudice and ordered the parents who had founded it to return their children to the Emanuel Beit Yaakov.

Those parents, however, insisted — and continue to insist — that the court finding was wrong and that their choice was a matter of religious conscience. They refused to be coerced to send their children to a school of the court’s choice and readily went to jail fighting for that right. The larger haredi community, wary of the Supreme Court in the best of circumstances and seeing it as having ignored clear facts in this case, rallied to the parents’ side.

Which version reflects the truth?

There is no doubt that discrimination against Sephardim exists in Israeli society, and that it is pernicious and must be fought wherever it appears. The question at issue in Emanuel, though, is whether such discrimination – or, rather, parents’ concerns for the tenor of their children’s educations – motivated the establishment of the new school.

Several simple facts, although oddly absent from most news reports, seem to point in one direction: More than a quarter of the girls who had been enrolled in the new school were Sephardim. And there were Ashkenazi girls who remained in the original Beit Yaakov, too. What is more, not one applicant to the new school was rejected. Any girl willing to abide by the school’s standards was welcomed, regardless of her ethnic background. The “segregation,” it seems, consisted of nothing more than two schools offering two different sets of religious standards.

The Supreme Court emperor’s nakedness may have been most succinctly voiced by one of the parents who went to jail as he was held aloft by the crowd and a reporter’s microphone was put before him.

“Are you a Sephardi?” asked the off-camera voice, its owner having apparently noticed the man’s complexion.

Then, with a wry smile at the absurdity of it all, he added, “A Yemenite is being taken in [to prison] for racism. You understand?”

Yet the headlines blared on, using charged phrases like “ethnic prejudice” and “segregation,” and portraying the jailed parents and their supporters as seeking to discriminate against Sephardim, invoking, as did the court, the  struggle by American blacks for civil rights in the 1950s and ’60s.

They got it backward. The haredi parents and marchers were championing their rights as parents to educate their children as they wish. They, if anyone, are the Martin Luther Kings here. The court, sad to say, assumed the Bull Connor role.

(Rabbi Avi Shafran is director of public affairs of Agudath Israel of America.)