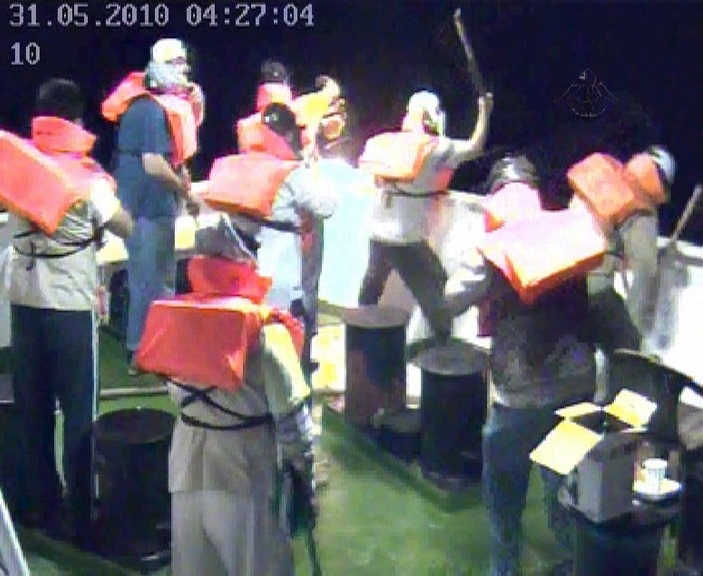 Footage taken from cameras aboard the Mavi Marmara show passengers apparently preparing for a confrontation with Israeli soldiers, May 31, 2010. (IDF / Flash90 / JTA)
Advertisement

NEW YORK (JTA) – The decision by Israel to participate in the U.N. probe of the Turkish flotilla incident marks a stark departure from Jerusalem’s practice of opposing the world body’s investigations of Israeli actions.

A year-and-a-half ago, faced with a similar decision when the U.N. Human Rights Council decided to appoint a fact-finding mission to investigate Israel and Hamas’ actions during the Gaza war, Israel boycotted the inquiry led by retired South African judge Richard Goldstone. Israel would pay a heavy diplomatic price: The Goldstone report was harshly critical of Israel and generated months of negative publicity for the Jewish state.

A year later, Prime Minister Benjamin Netanyahu is taking the opposite course with the U.N. review panel looking into the May 31 flotilla confrontation. Nine Turks, including a dual Turkish-American citizen, were killed in the melee that ensued when Israeli commandos tried to board the Mavi Marmara, part of a flotilla of ships sailing for Gaza in a bid to break Israel’s blockade of the strip. The incident drew worldwide condemnation of Israel.

“Israel has nothing to hide. The opposite is true,” Netanyahu said in a statement Monday. “It is in the national interest of the State of Israel to ensure that the factual truth of the overall flotilla events comes to light throughout the world, and this is exactly the principle that we are advancing.”

The U.N. inquiry out of New York will be led by a former prime minister of New Zealand, Geoffrey Palmer, and will include the outgoing president of Colombia, Alvaro Uribe, as well as a Turkish and an Israeli representative who have yet to be named. The panel is expected to begin its work Aug. 10 and submit a progress report in mid-September.

The decision to cooperate with the U.N. probe comes after two months of Israel resisting calls for an international inquiry and signals a tactical shift for Israel when it comes to dealing with U.N. investigations of its actions. It marks the first time that Israel will be part on a U.N. committee looking into Israeli actions.

“This could be viewed as a new approach,” confirmed a source at Israel’s embassy in Washington.

U.N. Secretary-General Ban Ki-moon hailed it as an “unprecedented development.”

Israel’s decision to cooperate on the probe follows weeks of urging by the Obama administration, but it’s also a way for Israel to mollify Turkey, which had threatened to sever diplomatic ties with the Jewish state unless Israel acceded to an international probe or apologized for the flotilla deaths.

Israel had launched its own investigations of the incident. An Israel Defense Forces investigation found intelligence failures in the IDF’s preparations for stopping the flotilla but no fault with the soldiers’ actions, and a government committee probe is still ongoing. Turkey, however, was not satisfied.

Concerned about the rupture between Turkey and Israel over the incident and its long-term implications for the future of the Middle East, the Obama administration was keen on finding a way for a probe that would satisfy both Turkey’s demands for an international inquiry and Israel’s concerns about bias against it. The new probe was the result of negotiations with Israel and Turkey.

“For the past two months, I have engaged in intensive consultation with the leaders of Israel and Turkey on the setting up of a panel of inquiry on the flotilla incident of 31 May,” the U.N. secretary-general said in a statement Monday. Ban said he hoped the inquiry would “impact positively on the relationship between Turkey and Israel as well as the overall situation in the Middle East.”

After the Goldstone report was issued a year ago with findings that tarnished Israel’s international image, some in Israel argued that it had been a mistake to boycott the inquiry. Rather, they said, Israel should have cooperated in a bid to ensure the least damaging report possible. With Israel now choosing cooperation over rejection on the new flotilla probe, some in Israel are cautioning against comparisons between the two.

In the Goldstone case, they note, the original mandate for the inquiry prejudged Israel as guilty and came from the Geneva-based U.N. Human Rights Council, which has a record of singling out Israel for opprobrium while ignoring human rights violators around the world. In the flotilla case, the probe will be conducted under the aegis of the U.N. secretary-general, who is seen as mindful of Israeli concerns.

“You have to make a distinction between the Human Rights Council, which is partisan and has an anti-Israel obsession, and between the secretary-general, Ban Ki-moon, who we hold in the highest esteem,” a senior Israeli official told JTA on condition of anonymity. “After ongoing discussion with the secretary-general, we are convinced that what he is proposing is credible and objective. I wouldn’t apply either of those two adjectives to the Human Rights Council, which is a travesty.”

For its part, the U.N. Human Rights Council voted just two days after the flotilla raid to establish its own inquiry into the incident, but Israel is not cooperating with that probe. The United States, among others, voted against it.

In welcoming the new probe, the U.S. ambassador to the United Nations, Susan Rice, implied that she hoped it would cancel out the Human Rights Council inquiry.

“The United States expects that the panel will operate in a transparent and credible manner, and that its work will be the primary method for the international community to review the incident, obviating the need for any overlapping international inquiries,” Rice said.

Neither the U.N. probe in New York nor the one being carried out in Geneva by the Human Rights Council will have legally binding consequences. In theory, a probe’s findings could prompt the U.N. Security Council to take action, but given the veto power the United States exercises in that body, such a scenario appears unlikely.