For two kinds of ‘survivors,’ filling in the gaps on family medical history 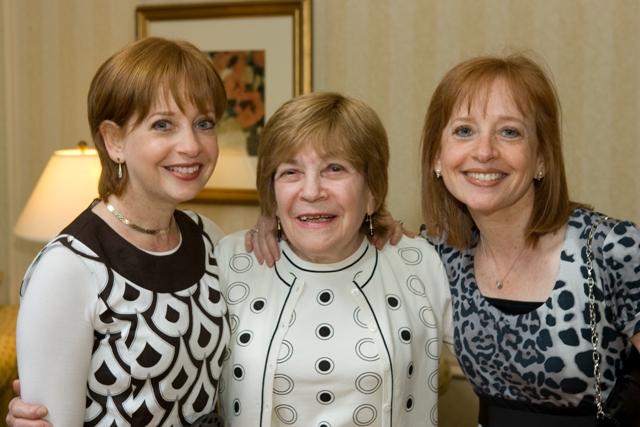 Rifky Atkin, left, with her mother, Ethel, and twin sister, Chavie, told a Sharsheret teleconference about the difficulty of not knowing her medical past. (Courtesy of Sharsheret)
Advertisement

Diagnosed with an aggressive breast cancer, Atkin was exploring treatment options when her surgeon asked, “Is there a family history of breast cancer in your family?”

The mother of four from Edison, N.J., stammered, “I don’t know and I’ll never know.”

Her parents survived Auschwitz as teenagers, she explained, but not their parents. Her four grandparents were killed in the death camp, taking with them all knowledge of the family medical history.

“Not being able to know the medical history beyond one generation above me underscored the importance of knowing that history,” Atkin told more than 100 participants during a teleconference and webinar last month hosted by Sharsheret, a national nonprofit group providing services and support for young Jewish women and their families facing breast cancer.

To better understand the effects of the Holocaust on breast cancer today, Sharsheret organized the free, hourlong program to address the concerns of breast cancer survivors and Holocaust survivors.

Even the term “survivor” has deep meaning for both groups, said Elana Silber, director of operations for Sharsheret.

Gaps in family medical history can sometimes be filled by genetic testing and is one way to gather valuable information lost in the Holocaust, said Niecee Schonberger, a cancer genetics counselor with Sharsheret.

“Genetic testing is important to rule out or rule in a [gene] mutation,” she said, but it is also important to understand that “mutations don’t cause cancer; they cause a predisposition for cancer.”

For Atkin, the testing not only proved helpful for determining her course of treatment, but also for the other women in her family.

“I could now pass on to my identical twin sister, and my daughters, some of the history that had been erased when my grandparents perished in the Holocaust,” said Atkin, 51, and cancer-free for 13 years.

However, “genetic testing has its limitations,” said Schonberger. A negative test result combined with a lack of family medical history can leave a woman with no real sense of her breast cancer risk, she warned.

And to the surprise of most women, she added, only 5 to 10 percent of breast cancer is inherited.

“Ninety to 95 percent [is] sporadic, the result of the interaction of mostly unknown environmental factors and the specific individual make-up of the woman,” Schonberger said.

An Israeli study published late last year in The Journal of the National Cancer Institute found that Jewish survivors of Nazi-occupied Europe were at a higher risk of developing certain types of cancers — like breast cancer — possibly due to an early exposure to environmental factors. Those factors include severe, sustained malnutrition; prolonged psychological stress; and exposure to the elements and infectious diseases.

The younger the individuals when exposed to these extreme conditions, the more likely they were to develop cancer later in life, said Dr. Lital Keinan-Boker, a researcher from the University of Haifa, who published the study with several colleagues.

Still further investigation is needed, Keinan-Boker said during the teleconference, “and the sooner the better. Time is a factor here.”

Ellen Eisen, a breast cancer survivor and oncology social worker in Memphis, Tenn., gathered nearly a dozen people in her synagogue sanctuary to take in the Sharsheret program by Skype. As a Sharsheret volunteer, Eisen said she likes to connect with other Jewish women dealing with breast cancer, but the universality of the disease resonates with her as well.